An unnamed narrator describes in third person the thoughts and actions of Jimmy Cross, the lieutenant of an Army unit on active combat duty in the Vietnam War. Lt. Cross is preoccupied by thoughts of Martha, a young woman he dated before he joined the Army. He thinks about letters she wrote him; he thinks about whether or not she is a virgin; he thinks about how much he loves her and wants her to love him. Her letters do not indicate that she feels the same way.

Don't use plagiarized sources. Get your custom essay on
“ The Things They Carried: Character Analysis Lt. Jimmy Cross ”
Get custom paper
NEW! smart matching with writer

The narrator lists things that the soldiers carry with them, both tangible and intangible, such as Lt. Cross’s picture of and feelings for Martha. Other members of the unit are introduced through descriptions of the things they carry, such as Henry Dobbins who carries extra food, Ted Lavender who carries tranquilizer pills, and Kiowa who carries a hunting hatchet. O’Brien introduces readers to the novel’s primary characters by describing the articles that the soldiers carry.

The level of detail O’Brien offers about the characters is expanded upon and illuminated in the chapters that follow, though O’Brien distills the essence of each characters’ personality through the symbolic items each carries.

The narrator offers additional detail about selected items; for example, the poncho Ted Lavender carries will later be used by his fellow soldiers to carry his dead body.

This device is an example of the author and narrator embedding small details in the text that will be further explained later in the book. It is important to note, too, how the details are selective; they are recalled by a character, the unnamed narrator of the chapter. The details of what each man carries are funneled through the memory of this narrator.

O’Brien details at great length what all the men carry: standard gear, weapons, tear gas, explosives, ammunitions, entrenching tools, starlight scopes, grenades, flak jackets, boots, rations, and the Army newsletter. They also carry their grief, terror, love, and longing, with poise and dignity. O’Brien’s extended catalog of items creates a picture in the reader’s mind that grows incrementally. O’Brien’s technique also allows each character to be introduced with a history and a unique place within the group of men.

Lt. Cross is singled out from the group, and O’Brien offers the most detail about his interior feelings and thoughts. Many of these soldiers “hump,” or carry, photographs, and Lieutenant Cross has an action shot of Martha playing volleyball. He also carries memories of their date and regrets that he did not try to satisfy his desire to become intimate with her by tying her up and touching her knee. O’Brien stresses that Lt. Cross carries all these things, but in addition carries the lives of his men.

Even as O’Brien opens The Things They Carried, he sets forth the novel’s primary themes of memory and imagination and the opportunity for mental escape that these powers offer. For example, as Lt. Cross moves through the rigorous daily motions of combat duty, his mind dwells on Martha. Importantly, as he thinks about Martha, he does not merely recall memories of her; instead he imagines what might be, such as “romantic camping trips” into the White Mountains in New Hampshire. O’Brien describes these longings of Lt. Cross as “pretending.” Pretending is a form of storytelling, that is, telling stories to oneself. O’Brien underscores the importance of Lt. Cross’s actions by emphasizing the artifacts—Martha’s letters and photograph—and characterizes Lt. Cross as the carrier of these possessions as well as of his love for Martha.

O’Brien moves from employing the literary technique of describing the soldiers’ physical artifacts to introducing the novel’s primary characters. The minute details he provides about objects that individuals carry is telling, and particular attention should be paid to these details because they foreshadow the core narratives that comprise the novel. This technique of cataloging the things the soldiers carry also functions to create fuller composites of the characters, and by extension make the characters seem more real to readers.

This aesthetic of helping readers connect with his characters is O’Brien’s primary objective in the novel, to make readers feel the story he presents as much as is physically and emotionally possible, as if it were real. Though the minutiae that O’Brien includes—for example the weight of a weapon, the weight of a radio, the weight of a grenade in ounces—seems superfluous, it is supposed to be accretive in his readers’ imaginations so that they can begin to feel the physical weight of the burdens of war, as well as, eventually, the psychological and emotional burdens (so much as it is possible for a non-witness to war to perceive). O’Brien’s attention to sensory detail also supports this primary objective of evoking a real response in the reader.

With Lavender’s death, O’Brien creates a tension between the “actuality” of Lt. Cross’s participation in battle and his interior, imagined fantasies that give him refuge. In burning Martha’s letters and accepting blame for Lavender’s death, Cross’s conflicting trains of thought signal the reader to be cautious when deciding what is truth or fantasy and when assigning meaning to these stories. While he destroyed the physical accoutrements, the mementos of Martha, Lt. Cross continues to carry the memory of her with him. To that memory is also added the burden of grief and guilt. Despite this emotional burden, O’Brien, as he continues in the following chapter, begins to highlight the central question of the novel: Why people carry the things they do? 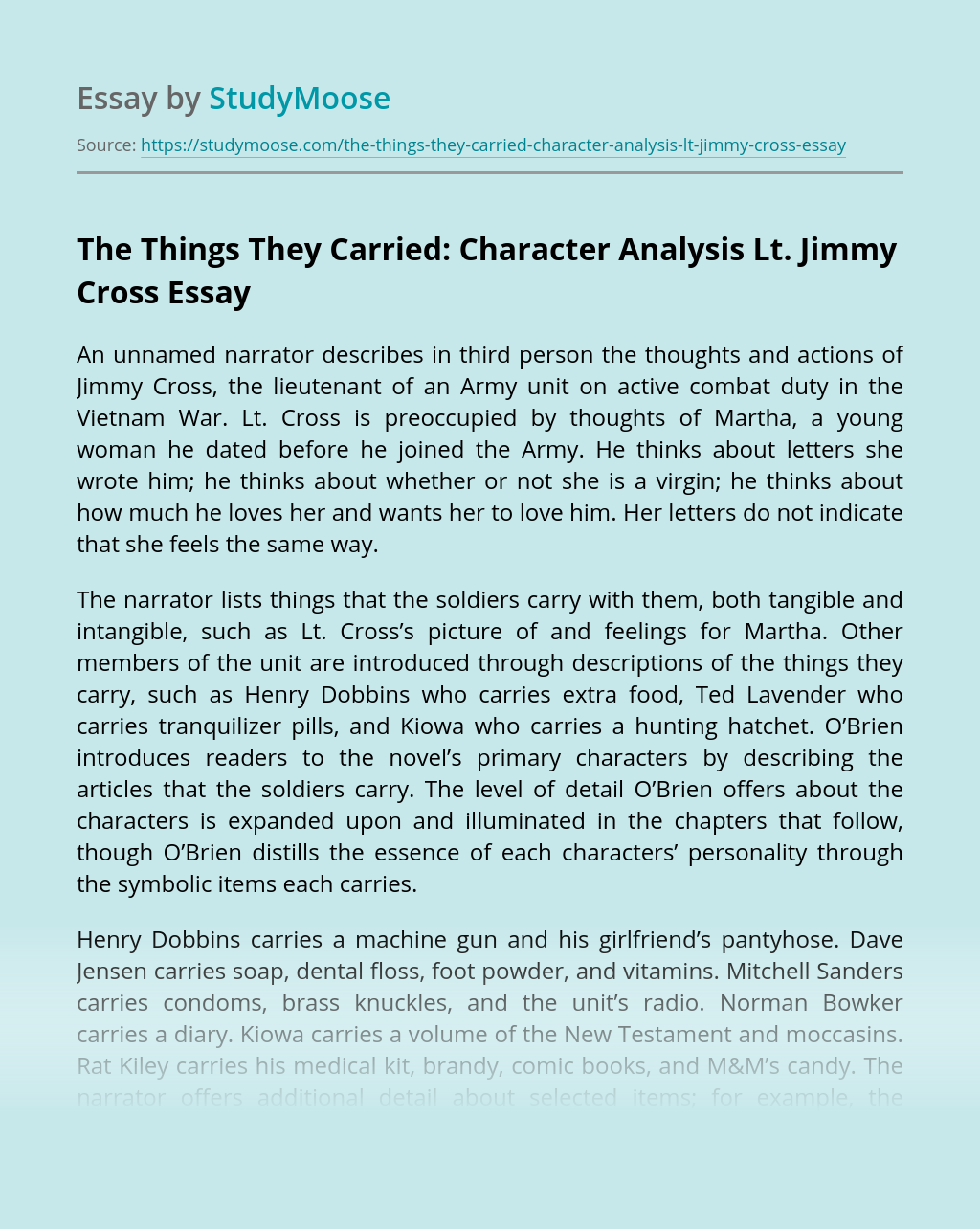