This is a paper about the Dadaist movement and a work of art that is very representative of Dadaist philosophy: Fountain by Marcel Duchamp. The Fountain is one of the most controversial works of art ever. Many argued at the time that it could not be considered art. At first glance, it began as away to test the integrity of an art society’s rules for how and what it would consider to be a work of art. It is more complex than this as will be shown.

Don't use plagiarized sources. Get your custom essay on
“ Marcel Duchamp’s Fountain and the Dadaist Movement ”
Get custom paper
NEW! smart matching with writer

The controversy it raised also forced a re-assessment of the definition “art.

” It embodied the Dada movement’s irreverence for the rules of a society that had gone mad. To understand Fountain in relation to the Dadaist movement, we must first understand Dadaism and why it emerged as a movement in the early 20th century. The history of Fountain and its creator will be told. Finally, these individual parts of the story will be assembled to give a complete picture of the significance of Fountain as work of modern art The First World War removed any glamorous or noble image of war that may have remained from the days before the mechanization and streamlining of the weapons of war.

The death and suffering brought about the Great War had a great effect on soldiers and civilians alike. The number of people killed and wounded was terrible enough. It was the great numbers killed coupled with the lack of a reasonable explanation for sending young men to die or to lose a leg, or an eye, or an arm that perturbed the fragile psychological balance that virtually drove an entire society to the precipice of madness.

Death permeated every aspect of life-like never before. Many questioned how a supposedly rational society could destroy itself in such a violent and irrational manner.

A movement composed of artists, performers, and intellectuals called for a rejection of the social and artistic norms of the civilization that had brought about the horrors of WWI. The senseless killing proved that life was without meaning; at least it had no meaning for the architects of their world. The movement called for a new beginning that would bring meaning to life. The name of this movement was Dada. There are several explanations for the name. One is that “da-da” is a common first word said by babies (Adams 915)..

“Dada” is also the French term for a wooden rocking horse. These references to young children symbolize the new beginning that the Dada movement called for in their manifesto (Adams914). Although Dada was a response to a grim situation, one of its characteristics was a lighthearted attitude. From this playful premise, another rationale for the name can be derived from the Slavic “da, da! ” which of course means “yes, yes” (Adams 914). Yet another rumor claims it was taken from a randomly opened page of a French-German dictionary with the word “dada” in it.

Perhaps the name has no meaning and it was just an arbitrary choice by some of the founding members. This explanation fits perfectly with the “anti-art” philosophy of Dada. They wished to shock the public into recognizing the absurdity of the Western world through their art (Frank 398). Jean Arp, a French artist, poet, and founding member of Dada summarized the movement with this: While the thunder of guns rolled in the distance, we sang, painted, glued, and composed for all our worth.

We are seeking an art that would heal mankind from the madness of the age (qtd. In Frank 398). Artist Marcel Janco said: Dada was not a school of artists, but an alarm signal against declining values, routine and speculation, a desperate appeal on behalf of all forms of art, for a creative basis on which to build a new and universal consciousness of art (qtd. In Frank 397). They wished to remedy society in a way that was in direct opposition to the malevolence of war and destruction. They would heal society through benevolent art that was fun and creative.

Fountain (1917) by Marcel Duchamp embodies much of the Dada movement’s irreverence for all traditional aesthetic values. It has an interesting story behind it. Duchamp was one of many artists that immigrated to New York from war-ravaged Europe. He was at the center of a controversy concerning one of his earlier paintings titled Nude Descending a Staircase in 1912. The painting is akin to time-lapse photograph of a nude woman walking down a staircase with each step superimposed on each other. It give the strong impression of movement; movement being a popular subject of interest by artists of the time.

Duchamp was asked to remove the painting before it was to be exhibited at an exposition in France because the organizers of the show felt it was too “radical” and the public was not ready for such a painting (Camfield 20). Duchamp complied, but was dismayed at being the victim of censorship by an organization that professed to honor democratic ideals in their charter. This is important because this group, the French Independants, would soon have an American counterpart known as the American Independents Society.

Duchamp never forgot the hypocrisy of being censored by the French Independants and when the American Independents Society was formed, he wished to test the fortitude of the democratic ideals it too claimed to cherish. The Independents’ founding principle was “no jury, no prize” (Camfield 22). This principle would, in theory, allow for a broad interpretation for what could be considered art and spur the great creativity in the creation of art by the Society’s members.

Submissions by artists that were to be displayed at expositions should have been accepted without being screened and possibly censored by a “jury” of any kind. Duchamp would submit, under a pseudonym, the work titled Fountain. The reason Duchamp chose to submit such an outrageous piece was not mainly to test the democratic principles of the Independents. Duchamp saw it as a way to inject a true work of Dada into the public view with the purpose of shocking them into recognizing the folly of Western civilization, a key aim of the Dadaist movement.

Duchamp was known for the slight additions drawn or painted onto everyday objects or mass-produced replicas of famous art pieces and named them “Ready-Mades. ” Duchamp combined his playful personality and sharp wit with his Ready-Mades. One of his famous Ready-Mades is L. H. O. O. Q. , a revised Mona Lisa in which he has added a mustache to the familiar face of La Gioconda originally painted by da Vinci 500 years ago. The title is meant to be phonetically the same as the word “look. ” The letters are also an acronym in French standing for “She has a hot ass.

” These demonstrates that Duchamp’s intent was to shock the observer while at the same time doing this with a good sense of humor. One of the greatest shocks the world was to ever receive from a work of art would be administered by Duchamp’s Fountain. To test the democratic strength of the Independents as discussed earlier, Duchamp submitted a porcelain urinal he purchased from a plumbing store shortly before the first exposition of the American Society of Independent Artists. The urinal was to be displayed upside down from its intended position, the name R.

Mutt was inscribed on it, and it was christened with the title Fountain. It arrived a few days before the beginning of the show and it was judged by the “jury” that was not supposed to exist according to one of the founding principles of the Independents. Just as Nude Descending a Staircase was snubbed from being viewed a few years previous, Fountain too suffered the same indignity of being censored. Duchamp immediately resigned as a director of the American Independents in protest. It was not known until later that R. Mutt was really Duchamp.

Fountain is significant in the context of the Dada movement because it was the opposite of anything that Western culture would dream of considering art. That was exactly the point of the movement when it began in Zurich, Switzerland as a response to the horrors of the mechanized death machine unleashed by the First World War. It also asked an important question: “What is Art? ” Duchamp thought that the subjects of his Ready-Mades are as artistic the subjects chosen by a photographer because they are both about the choice of subject matter made by the artist. Photography was well established as an art form in Duchamp’s time.

Why is his choice of subject matter any different from what the photographer chooses to capture on film? The only difference between a Ready-Made and a photograph is the medium in which the subject resides. Why Duchamp chose what he did to create Fountain is hard to discern from the contradictory statements made over the years until his death in 1968. William Camfield makes a good argument that Duchamp did not pick out the urinal at random as he sometimes implied in some responses to questions he was asked about any aesthetic considerations he took when the urinal was purchased.

Camfield says: Turning from those late interviews back to 1917 and Duchamp’s work that preceded Fountain, we find not aesthetic indifference but an oeuvre of extraordinary visual and intellectual rigor. And Fountain fits in that oeuvre. Far from being the product of an impulsive decision to challenge the principles of the Independents, Fountain seems to be expressive of its creator, related to other work by Duchamp, and reflective of other art and the culture around him. (43)

It makes sense that the style and creativity exhibited by Duchamp in the other works of art he created around the time of Fountain would be evident in a work that was much more than a last-minute random selection. Fountain seems to be very consistent with his other works during this period and casts doubt on the idea that he did it for anything less than to espouse the tenets of Dada; beliefs he was strongly committed to. Works Cited Adams Laurie S. , Art Across Time. New York: McGraw-Hill, 2002 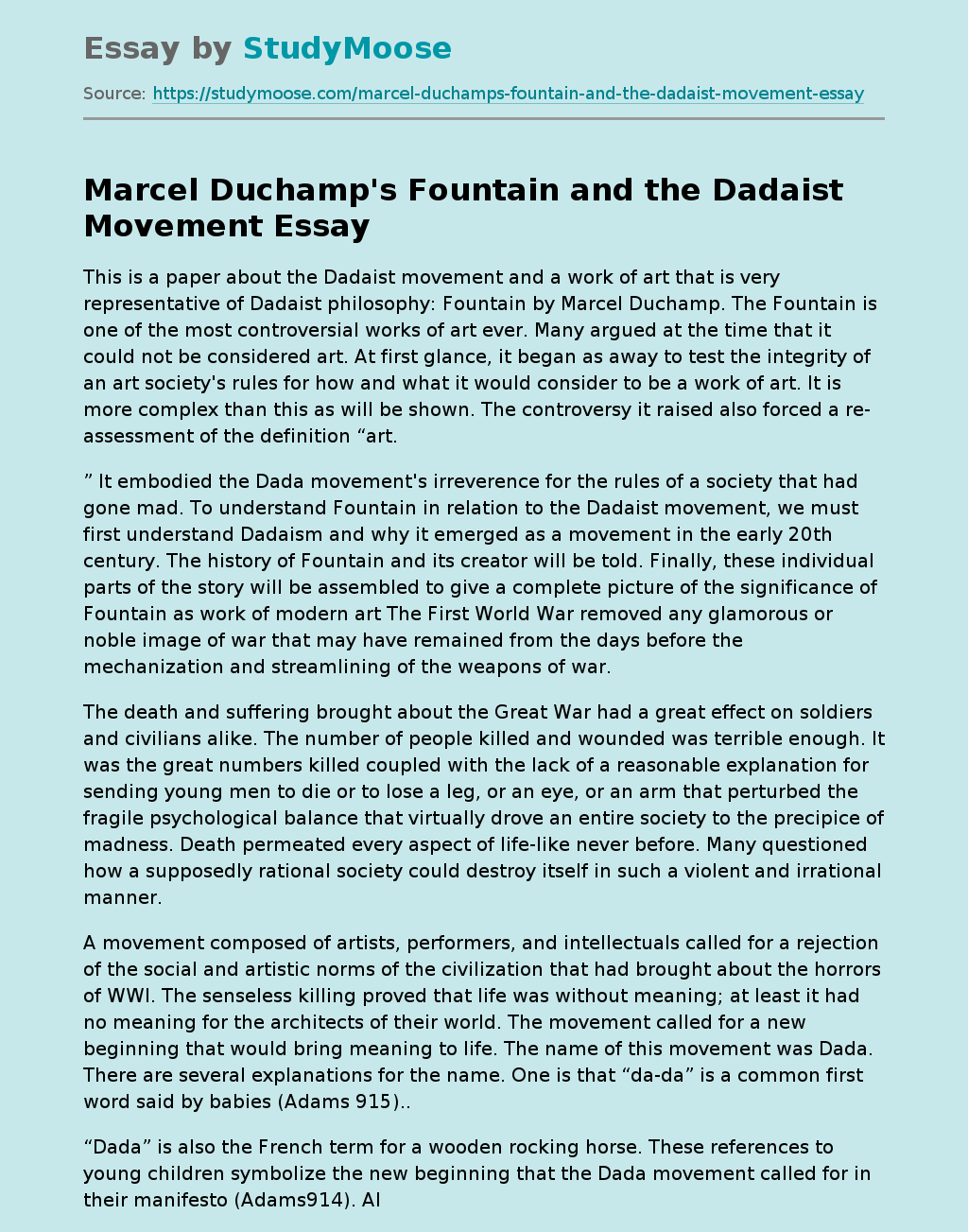