To begin to understand Marcel Duchamp’s specific piece of art “The Fountain” I delved deep into the history behind the Dada movement, from which Duchamp thrived. This began with an in depth look at Western Europe during World War I, The Dada’s reaction to the World War, and more specifically Marcel Duchamp’s reaction to the World War. As stated in the book, “no single event influenced the development of modern as profoundly as World War I. ” Western Europe during the World War I was sufficiently negatively effected, and Europe was not the only country being affected.

Don't use plagiarized sources. Get your custom essay on
“ Marcel Duchamp’s Art Masterpiece The Fountain ”
Get custom paper
NEW! smart matching with writer

Because of international alliances and colonization, everyone seemed to have extreme involvement causing for copious amounts of loss and hardship. Since the industrial revolution was booming there were obscene amounts of massive artillery as large as tanks. As well as strategies as intense as poison gas. The extreme situations soldiers were enduring did not go un written. Many soldiers were coming home “shell shocked,” missing limbs, or psychologically injured.

Grenades and land mines were causing wounds unheard of before. Doctors were starting to advance in the plastic surgery aspect to better facilitate these horrid wounds.

An interesting aspect of this work was “facial prosthetics” which before these injuries was looked at as unnecessary. But as wounded soldiers began to flood in, unrecognizable, something had to be done. The most advanced in this field was Anna Coleman Ladd an american sculptor. Who helped to advance in mold-making, modeling, and anatomy to create masks “lifelike.

” World War I caused a much more bloody battle than anyone ever had expected. And like with any war people reacted, and people reacted in different ways. By either turning their cheek, making art, or serving their “duty. Those who did express themselves artistically, starting drawing in alternative styles. As for other people they began to migrate to more neutral countries, like Switzerland or The United States. The United States was involved but not geographically like Europe was. Before the Dada movement was the Futurists who “welcomed” the war. With an artist named Marinetti speaking his opinion such as, “the world’s only hygiene” to help further the nationalist ideas. Futurism was a response to the fallen art in Italy, seeing the movement towards the industrial revolution as logical and necessary.

During the World War an extremely important member of the Futurist movement was pronounced dead, Umberto Boccioni. And as members of society began to recognize the World War as destructive and unnecessary artists began to change as well. This is where the Dada movement arose, first taking notice in Zurich Switzerland around 1915. This group of basically twenty year olds began to “mock” art by creating “free-word association poetry readings… absurd theatrical or cabaret performances… and nonsense lectures. ” The art world was turning upside down, creating for a sort of questionnaire towards what art had been for centuries before.

The Dada enthusiasts were fed up for the materialist and nationalist views that had helped to create this War. And now that there was this sort of “clean slate” to begin a new type of art, the Dada enthusiasts did just that. The Dada members moved into a direction free of accepting mechanization, revolution, and war, unlike the line of artists before them. A medium of art that the Dadaists prevailed in since the beginning of their movement was theatre. One of my favorite parts of this entire art history book is imagining this scene; “Tzara is wiggling his behind like the belly of an Oriental dancer.

Janco is playing an invisible violin and bowling and scraping. Madame Hennings, with a Madonna face, is doing the splits. Huelsenbeck is banging away nonstop on the great drum, and Ball accompanying him on the piano, pale as a chalky ghost. ” This sort of extreme performance seems to mock the extreme situations that were going on the war. Creating a dialogue about whether or not situations should be happening, or should be creating such statements. An important figure in Dada abstract poetry was Hugo Ball reciting his “sound poem. ” Personally I feel Hugo Ball made one of the most important thesis’s to explain Dadaist. That conventional language had no more place in poetry than the outworn human image in painting. ” The word organize was nowhere to be found within their society. A term as unimportant as war to them, they threw out the idea and created at ease. They wanted to be unidentifiable, non-stylistic, so that their art took shapes and forms never created before. It was a way to rebel against the war as well as all of the previous ways of creating “art. ” The Dadaists used three main methods to create; bruitisme, simultaneity, and chance.

Focusing on the aspect of ‘chance’ when creating artwork. It was the “overriding principle” when creating, taking over any control the artists believed they had within their work. When ‘chance’ was taken into account, there was really no other aspect that was creating the work. The exhibitions that the Dadaists participated in were short-lived, and Zurich Dada seemed to be ending alongside the end of World War I. The birth of the Dada movement in Switzerland was extremely important but its ability to spread to different parts of the world, is another extremely important aspect.

During World War I Marcel Duchamp and Francis Picabia conjoined at a spot in New York city founded by an American Alfred Stieglitz, a very important figure bringing European artwork to America. Duchamp’s Dadaist career is one of the most important in the Dada movement. His early career highly revolved on “painting machines of his own creation. ” He was not trying to please the eye of his viewer, he was tuning into the ‘chance’ aspect trying to steer as far away from conventional art making as possible.

One of his most important paintings was Nude Descending a Staircase No. 2, which was a “static representation of movement. ” Which is quite the oxymoron, making complete sense to the Dadaist movement. In his paintings he morphs the human anatomy into mechanical parts, “mechanomorphic. ” Duchamp was seen as a “successful” artist when four of his paintings were sold at the Armory Show in 1912 in New York City. As his success in paintings grew his desire to create them lessened, he was now keen on the idea of sculpture.

He began devising his own relativism mathematics and physics. By 1913 Duchamp had coined the term, “readymade” defined at this time as “manufactured objects promoted to the dignity of art through the choice of the artist. ” Duchamp began using these “found” objects as the main subjects as his sculptures. This was an interesting way to make art, allowing for basically any item to now be called art. What an extremely specific and new idea this was for the time, a truly original idea. These “readymades” could virtually be made from anything by anyone! 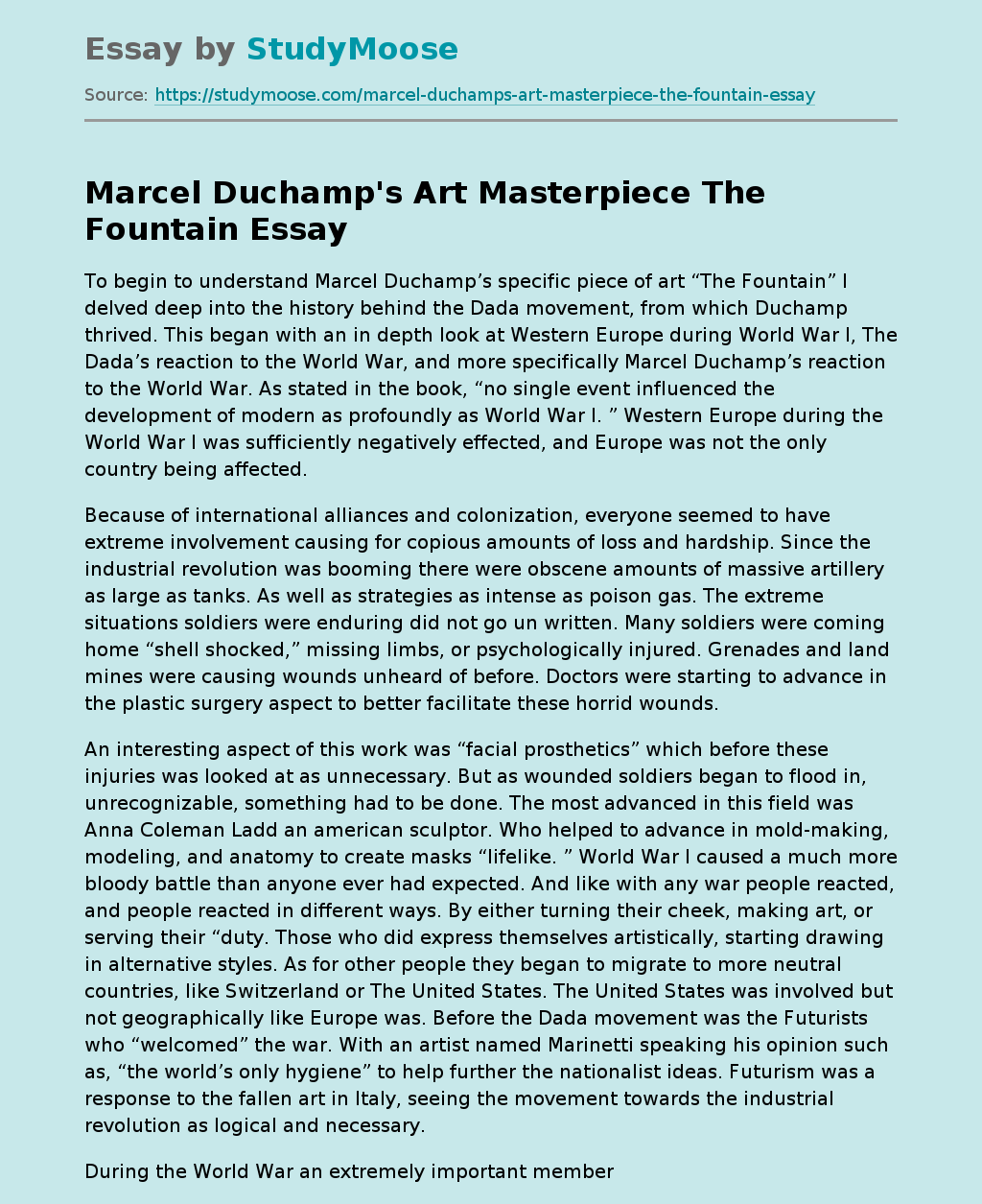