Step Up Revolution is the forth episode of the famous dancing film series ‘Step Up’. It is about a young female dancer called Emily wanting to pursue her dreams to be a professional dance in Miami. However, his father does not support her. She then met the leader of the Mob, a dancing team, Sean, and they developed romantic relationship. I think this film is a very good one. The storyline was designed very well and it continued to bear the high reputation of the ‘Step Up’ series.

Don't use plagiarized sources.
Get Your Custom Essay on Step Up Revolution Just from $13,9/Page

The dances in the film were well organized and it is very favorable for teenagers to watch. Besides, the soundtracks throughout the film were carefully selected.

The background music for the dances was well-known and we could easily sing and dance along them. I had resonance while the songs were played once and once again. I felt really familiar to the music and I could also be inspired by the film and design more new dance moves! Moreover, I think the actress of Emily did a great job.

She acted her lines well and he could show the rebellion of teenagers very clearly to us. The romantic relationship between her and Sean was also a very touching one. They could ignore opposition from Emily’s father and pursue their dreams. Both of them did very well on acting these scenes. In conclusion, I think I will regard this as one of the best films I had watched before. I would give a full mark of 5 out of 5. 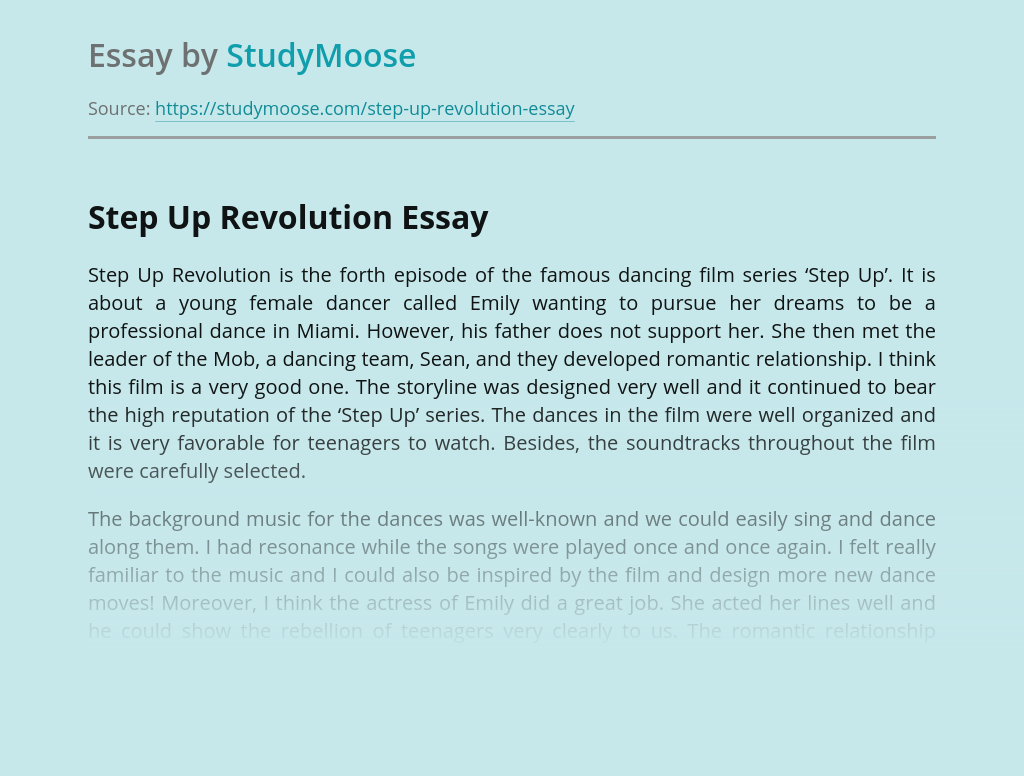 Dance in my life

Ever since I was a little girl dance has always been an important part of my life. When I was five, my mom enrolled me in dancing classes after my sister, never realizing that dancing would ever lead to anything serious. For the first year, dancing was a side hobby to help keep me busy...

View sample
Twistin’ on the Dance Floor: An Analysis of the 1960s Twist Dance Craze

The art of dance is one of the greatest defining elements of a society’s culture, and parallels the existing social and philosophical tenets of a particular era.  The 1960s, known for many revolutionary concepts that had ultimately carved American culture, was also known for an iconic dance move known as the “Twist”.  During this era...

3.2 Stop, Look and Listen: Nonverbal Communication and Active Listening Part I: Nonverbal Communication Try This: Research what one hand gesture means in a different country. (You may ask people from other countries/and or conduct your own web search or library search for answers). Some suggested countries/cultures to research might be: Italy, Japan, China, Greece,...

Dances with Wolves From Wikipedia, the free encyclopedia (Redirected from Dances with wolves) Jump to: navigation, search For the song by Mount Eerie, see Mount Eerie Dances with Wolves. This article needs additional citations for verification. Please help improve this article by adding reliable references. Unsourced material may be challenged and removed. (March 2008) Dances...