Late last Saturday day night, on April 14,2012, I attended the very first dance concert at John Anthony Theater at Collin College Spring Creek Campus. This concert was performed by Collin Dance Ensemble, which is a vibrant company that performs innovative contemporary modern dance. Their goal is to produce dance works at the highest level of artistic excellence. The dance company attends and performs at the American College Dance Festival annually and has been selected for the Gala Performance at the regional festivals sevens times.

Don't use plagiarized sources. Get your custom essay on
“ Dance Critique ”
Get custom paper
NEW! smart matching with writer

At 7:30 pm, people started walking in to the theater, just a few minutes after, the audience seats filled with the crowed people who come to support the dancer, or maybe interested in dance performance, and mostly have “dance appreciation fever” like me. After the introduction of director, all the lights dimed down and the curtain slide up. The light focuses in the middle of the proscenium stage where there are group of seven dancers sat down in the middle of the stage ready to perform.

They started it off with the piece called Friendships that was choreographer by the Chair of Dance Department and also a director of Collin Dance Ensemble, Tiffanee Arnold. Under the direction of Tiffanee Arnold, Collin College’s Dance Program has gained the reputation for excellence in dance education, choreography and performance. Music is Sinking Friendships by Jonsi, this piece was kind of bored to me as an unprofessional audience to really understand the concept of every part of the story they tried to tell.

Not very clear, but I can point out some of the movement of the dancer described the image of friendships such as holding hands and dance in circle as a group. And it was ballet so I’m not very interested. Outside topic, the theater was freezing cold. I try to concentrate to the performance to forget the coldness.

The Time Between choreography by Reyna Mondragon is one of my favorite piece of the show. There were many of interesting parts, there were people ran across the stage back and forth while few others were illustrated the movement of time. The dance used running motion to create tick tick tick moves, it looked kind of cool to demonstrate the clock ticking. Through the music by Clint DiFranco, Welcome to Lunar Industries, this piece is very modern. I love how to change the speed now and then during the performance. They just went freestyle in the climax of the song; there were a lot of running and walking movements, jumping, exciting and then they cut it out the slow motion dance with rhythm and powerful moves. People still ran across the stage, in my opinion they say that does not matter what’s going around you, time keeps running and life goes on.

So far that night, one bored me and one got my attention to the show. Here comes the solo of Jake Harkey, the only male student in the group, performed Unseen Injuries by Tiffanee Arnold. This dance is in support of Collin College’s Center for Scholarly and Civic Engagement Book-In-Common: Soft Spots by Clint Van Winkle. And also it was inspired by several passages in the book, in particular: “But nobody talks about the mental wounds. It is the unseen injury that slips through the cracks, leads people to drinking, puts pressure on spouses, and causes healthy men to call the fire department for host symptoms.

You are suppose to about-face and forward-march, forget about the war as soon as you get home, take 800 mg of Motrin and carry on like nothing ever happened. But how was I supposed to let go when I was reliving it every day?” (p.137; C. Van Winkle). One soldier, one person stood still in the middle of the stage. He was on the basic training clothes letting all the extensive madness out of his head. He raised the hands to try to reach out a reality of peace. Sometimes, he look back at what he had done as a soldier and all the images of war come back in his mind. The stress out anger movement was dynamic with the vocal sound. I can feel the pain through what he wanted to tell. He used wide range of space to show the falling and depression.

He nailed the part wonderful as a college student. The one-foot stand come up to me as unbalance mind of a soldier in the war. Growing up in a country had a long history of fighting in war, I learn and see a lot about the soldier that come back from the war through real life and books. I can see in them not only the physical pain they had been through but also the spiritual scar that the war had impacted in them. I think that is why this piece Unseen Injuries gets my intention the most. The obsession will follow them for the rest of their life.

Narrative modern dance described the feeling of those soldier had been yearly in war. The performer was success to send out emotion of a soldier after war. It would seem sadly they are often overlooked impacting not only the injured but their friends, families and wider communities. Those with psychological trauma can go undetected and it can be years before medical treatment is sought.

Tiffanee has a great choice on music of Message in a Bottle: Nancy’s Letter. Farewell Nancy by Ed Harcourt is very romantic and particular fit in the motif of this dance. I see a lot of dancing on ground level to create the sea scene. Soft and flexible are the word to describe their actions. The music inspired me to more focus on the dance. It represents the emotion of the main character want to see her lover so badly in distance relationship.

And she also is a quite entertainer with piece Can’t Shake It. It got people excitement by their funky dance moves on those fluffy dresses. The audiences included myself were very enjoyable in this song. They showed that they couldn’t shake most part of their body from their trunk to head. Shame face and frustrated movements revealed to be ashamed part of their body couldn’t be shake. I think the dancer also enjoy themselves in such a piece.

The performer are all college student so they were bit lack of perfection timing with each other and the steady movements which required in most ballet pieces. They were connected to the audience strongly in Scars, strong movements and ran toward downstage at the end. I would they were success to give out the message of each piece to me as the audience. Just a few was kind of bitter to figure out. I was born in 90s so ballet and jazz were not my type of entertaining dance. It is little bit far from my generation.

But modern is more enjoyable to me. I like to move fast with rhythm especially hit all the beat of the music is way cooler. I don’t know any of Jazz moves in there cause I cannot tell. One thing I saw a lot that the modern and ballet, those dancers use many of motif manipulations such as incorporative with the turn and jump, repetition, levels (ground, middle, high jump), rhythm was actually the part that I pay attention the most.

Overall the concert was very great to me. Couple piece I did not understand what they try to say at all or I just did not be interested. Through all pieces by Tiffanee Arnold, I see that her choreography always tell a story along the dance. There is always something meaningful and deep down inside the performance that she wants the audience to see the piece and later on cautious thinking the background story.

Dance Critique. (2016, May 31). Retrieved from https://studymoose.com/dance-critique-essay 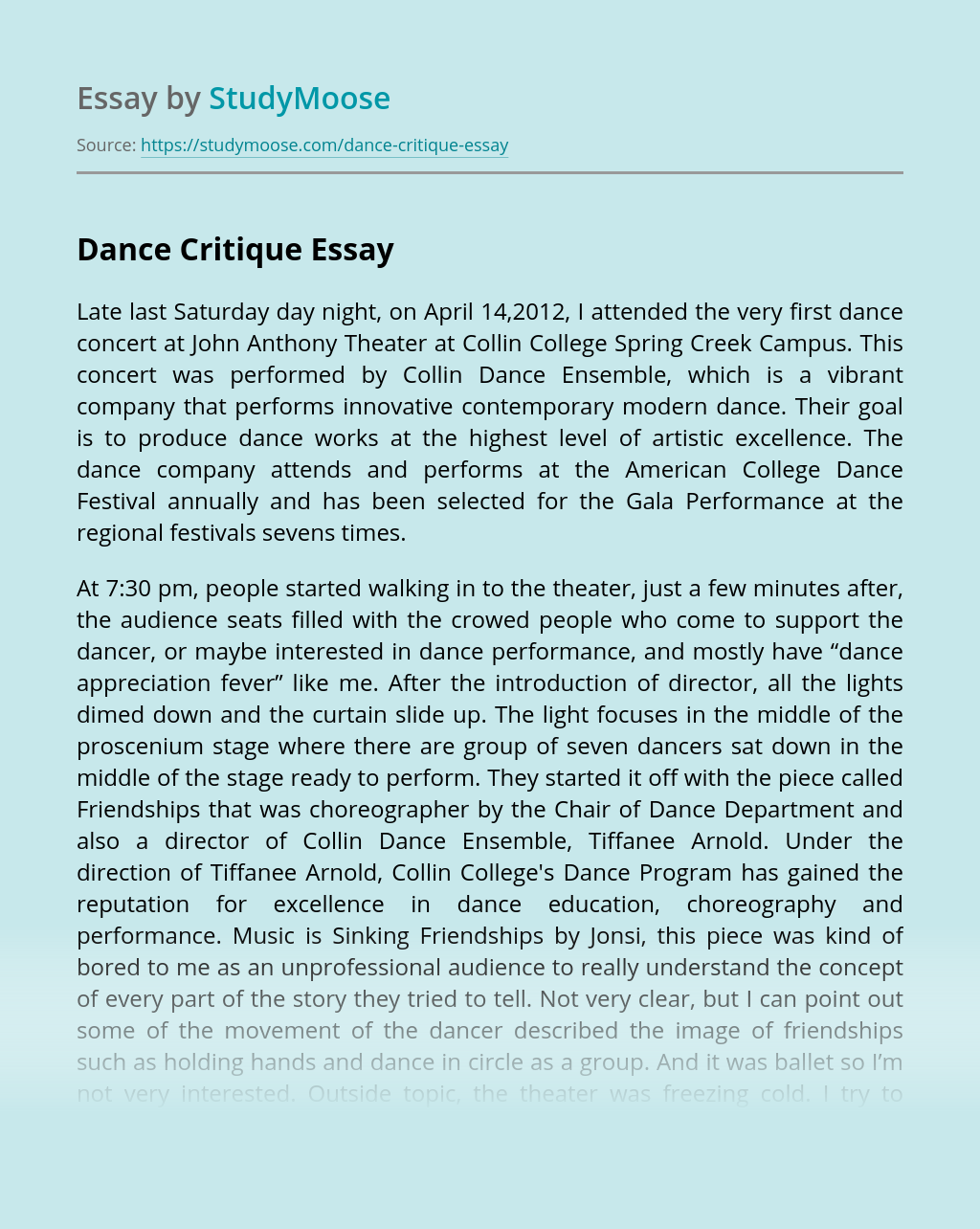