Twistin’ on the Dance Floor: An Analysis of the 1960s Twist Dance Craze

The art of dance is one of the greatest defining elements of a society’s culture, and parallels the existing social and philosophical tenets of a particular era.  The 1960s, known for many revolutionary concepts that had ultimately carved American culture, was also known for an iconic dance move known as the “Twist”.  During this era of post-war America, most young people—and, eventually, all other generations of the time—were finally accorded the freedom of expression they deserved, and one of the ways in which they expressed their newfound liberty was embodied by the individualistic movements that defined the “Twist”.

Don't use plagiarized sources. Get your custom essay on
“ Twistin’ on the Dance Floor: An Analysis of the 1960s Twist Dance Craze ”
Get custom paper
NEW! smart matching with writer

One clear attribute of this dance was the amount of social involvement required; if previous periods in dance necessitated contact between dancers, the Twist, borrowing from its predecessor Lindy Hop, only needed a basic twisting of hips.  However, it was still considered a “social” activity, as it was usually done with a partner.  With the 1959 release of Chubby Checker’s “The Twist”, people all over the country started engaging in a mundane movement that echoed putting out a cigarette stub with one’s foot,  That, combined with pulling an imaginary towel behind one’s back from side to side, were the simple and easy-to-follow steps of the Twist (Keeble, 2008).

The Twist, being the representative dance movement of the 1960s, opened the dance floor to a multitude of dances that all connoted freedom—such as the frug, the jerk, the watusi, the funky chicken, the mashed potato, the swim, and the Freddie.

Tracing its roots to nineteenth century African American dances that eventually led to the music of the Sensational Nightingales in the 1930s inviting listeners to “do the twist”, the Twist became wildly popular because of its easy steps and celebratory ode to liberty (Reilly, 2003).

But behind the joyous exaltation accompanying each Twist performance was a history that had references to the nation’s state; because this era was the aftermath of a horrible war and years of Depression, people sought avenues that would finally uphold culture, as well as freedom from their bleak past.  This they found in film, literature and music, particularly in the showcasing of My Fair Lady and the music of Elvis, the Beatles, Ray Charles, and Smokey Robinson.

The common ground of all these was the freshness and creativity in sound and appearance, and the unabashed effusion of soul and spirit (RichM, 2003).  More specifically, the Twist was part of the youth’s determination to create new forms of expression and entertainment that were pointedly different from the older generations’.  Because this dance came after the previously popular dances that were more formally situated in ballrooms, it created the boundaries between then and now, and completely identified the culture of the young—individual, spontaneous, and enthusiastic (Reilly, 2003).

To this day, the Twist is popular among young and old alike—still because of its simple and fun moves and the catchy music that usually goes with it.  It has evolved from its original purpose, and has even conquered territories of physical wellness, such as exercise and aerobic activities because of its proactive references to specific movements.

But it is always enlightening to discover that this engaging, fun dance style had its own reasons for being; the “twisting” movements correlate with the shunning of old values and traditions, and the creation of a new culture.  The freedom and celebration that can be gleaned from the Twist, whether intuitively or theoretically, is easily made by people of any generation.  After all, when someone calls on you to “come on and do the twist”, the idea of twisting your body to the beat and in wild abandon is an invitation quite difficult to resist.

RichM.  “The Political Context of “The Twist” (by Chubby Checker)”.  Democratic

Twistin’ on the Dance Floor: An Analysis of the 1960s Twist Dance Craze. (2017, Mar 01). Retrieved from https://studymoose.com/twistin-on-the-dance-floor-an-analysis-of-the-1960s-twist-dance-craze-essay 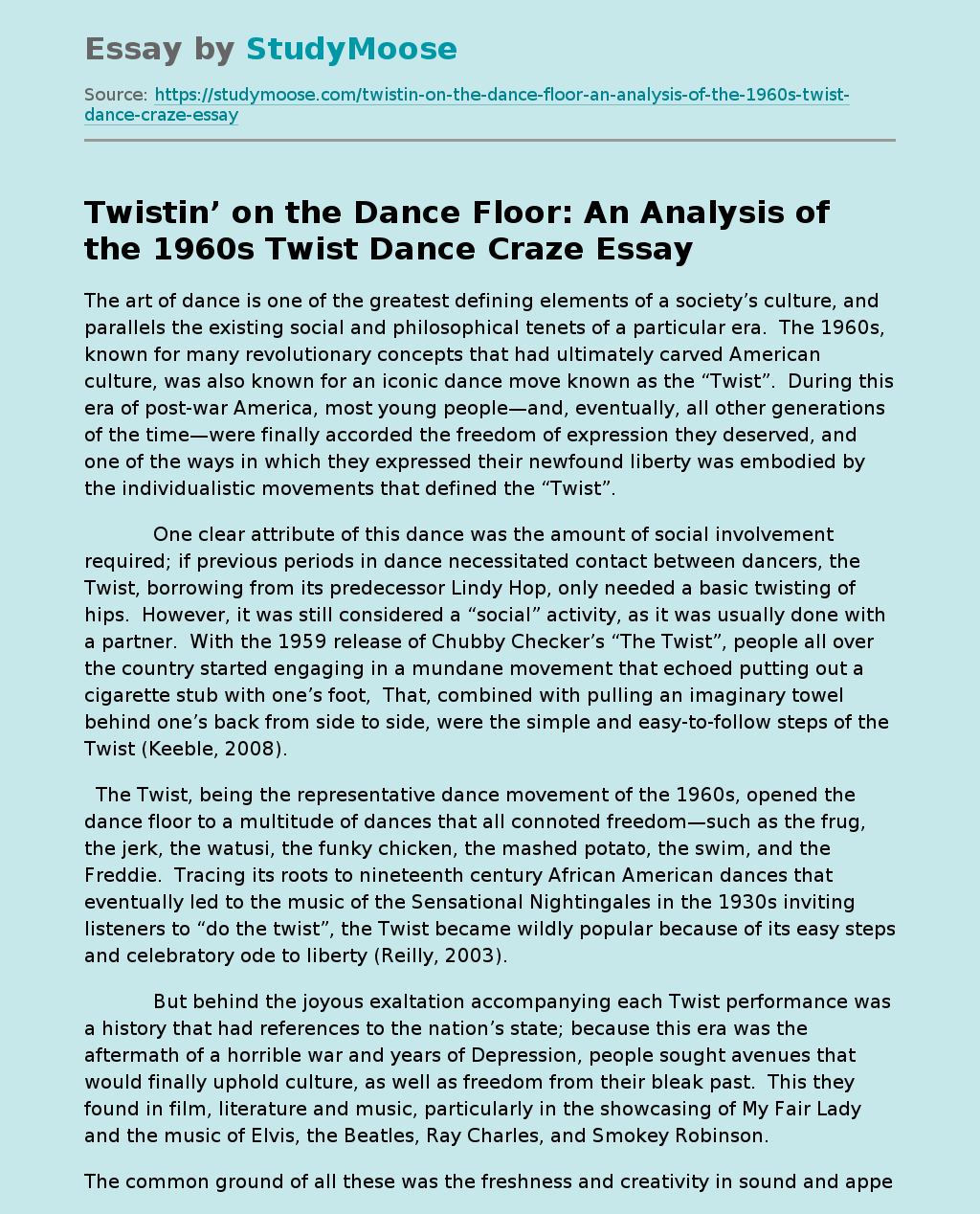