"Be Sure You're Right, Then Go Ahead": The Davy Crockett Gun Craze Article Review

The Davy Crockett Gun Craze by Sarah Nilsen is an article about the effects of gunplay in the Davy Crockett cartoon series in the 1950s. The cartoon series depicted Davy Crockett as a hero with a gun, and to the younger viewers, it portrayed to them that guns were acceptable to use in play. The author, Sarah Nilsen, is a professor at the University of Vermont, and she teaches the history of television and film and how they affected popular culture and their influence on the audience (UVM.

Don't use plagiarized sources. Get your custom essay on
“ “Be Sure You’re Right, Then Go Ahead”: The Davy Crockett Gun Craze Article Review ”
Get custom paper
NEW! smart matching with writer

A strong example that helped strengthen the article when she pointed out that in 1942, Disney came out with the film Bambi that was “anti-hunting and anti-gun,” which was contradictory of Disney because about 10 years later, Disney produced the Davy Crockett cartoon series that promoted gun use where the gun was the “center of his image and message” (Nilsen 3).

This example helped prove her point that Disney is very contradictory of itself and the messages that they are sending children. Nilsen used another example that was a report of what a child said to show that the Disney shows were influencing children using guns; “In Brooklyn, New York, a six-year-old son of a policeman asked his father for real bullets because his little sister ‘doesn’t die for real when I shoot her like they do when Hopalong Cassidy kills ’em'” (Nilsen 4).

Nilsen is showing the reader that children are being influenced by what they watch and it’s causing them to be desensitized about guns. Guns are seen as normal and since they are portrayed as toys, people aren’t going to be safe with them as they should be.

Along with strong examples to help prove her points, Nilsen also uses many quotes in the article to support her points and show the reader that her points are valid and has done sufficient research. For example, she takes a quote from what media theorist Daniel Dayan when he says “ideology is hidden in our very eyes” (Nilsen 2). She uses his quote as a reference and in the next sentence she validates the quote by saying that the Davy Crockett series displays the ideology that contradicts the message (Nilsen 2).

All in all, Sarah Nilsen’s article, “Be Sure You’re Right, Then Go Ahead”: The Davy Crockett Gun Craze, is an overall excellent article. Nilsen draws out many great points through examples and stories to support her points. Her knowledge of the subject is eminent through her control of writing and use of valid sources to help validate her points. The writing had substance and flowed well to keep the reader on track and focused on the writing.

"Be Sure You're Right, Then Go Ahead": The Davy Crockett Gun Craze Article Review. (2016, May 19). Retrieved from https://studymoose.com/be-sure-youre-right-then-go-ahead-the-davy-crockett-gun-craze-article-review-essay 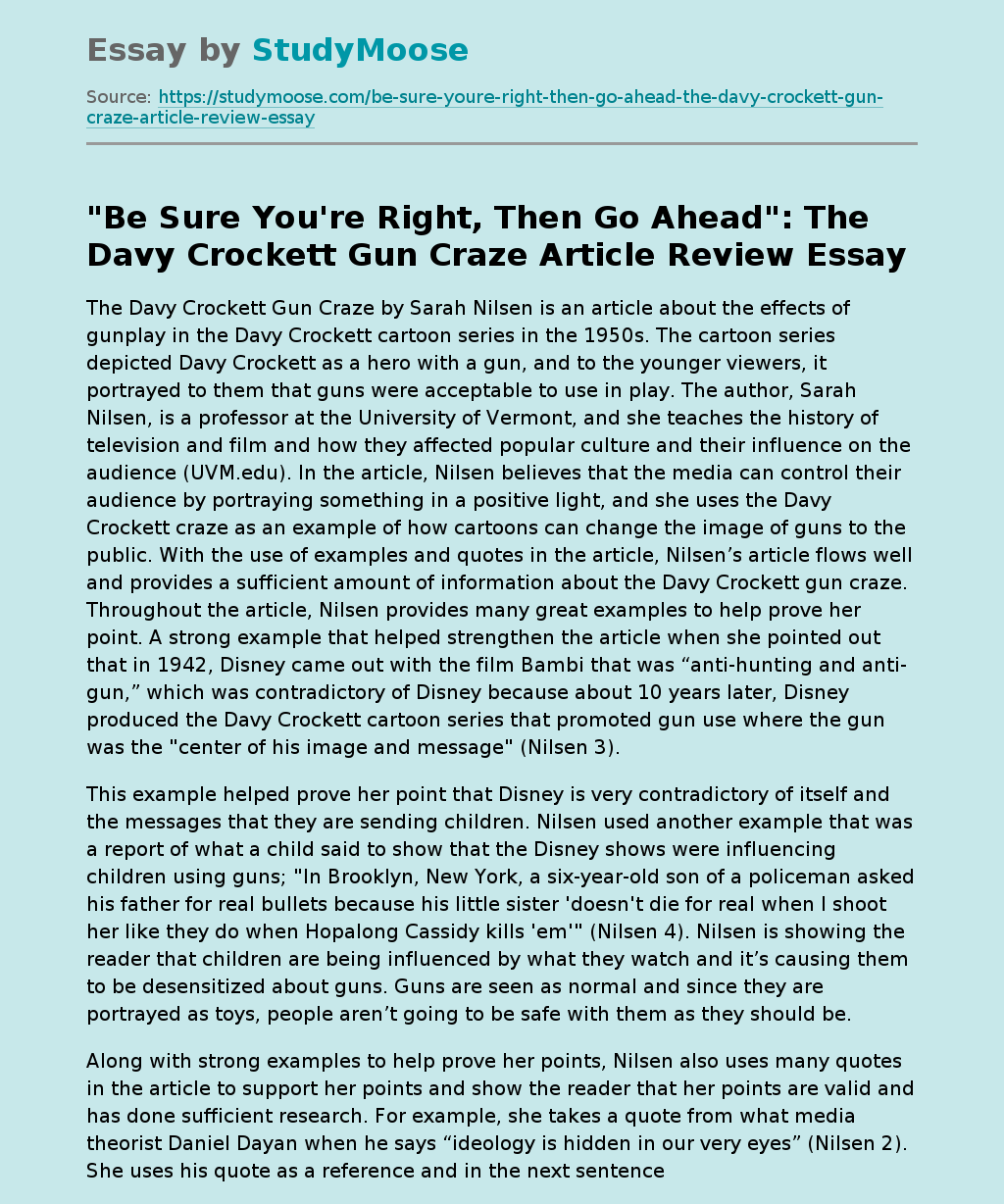