My Favourite Cartoons and Their Influence

Most children can recall the old memory of waking up every morning to watch their favorite cartoon. Some of my favorite formative animated films and shows were Maya and Miguel and Mulan. I consider these the most pivotal works in my life because they have influenced me from the very beginning.

I remember well the feeling of being so excited to turn on the TV in the morning before school started. I would eat some cereal for breakfast while I watched my cartoons.

Don't use plagiarized sources. Get your custom essay on
“ My Favourite Cartoons and Their Influence ”
Get custom paper
NEW! smart matching with writer

As an adult, the mornings look a lot different from the “good ole days”. Usually, now my mornings are more stressful with a busy mind filled with tasks to do for the day.

My mother had me when she was 21 years old and I was born in Houston, TX in 2001. My childhood began in my mom’s childhood home also known as my grandma’s house. More specifically, I grew up in Pasadena, TX which is part of the southeast of Houston with little to no diversity.

At a very young age, I only saw mostly a Hispanic community in the neighborhood and at school. As a kid, you do not fully comprehend self-identity or how important familial culture is too. I often felt left out at times like I did not belong. But I learned to be proud of my culture and to respect others as well. Maya and Miguel were pivotal cartoons to my early life because it marks where I started my journey in Pasadena.

Maya and Miguel were a dynamic brother and sister duo and whenever they come across an issue they learned how to solve this by working together. I am an only child and this cartoon show on PBS influenced me to be grateful for the life I was given. I often get asked if I like being an only child and if I feel lonely? It can be frustrating when I get asked these types of questions because I do not know what is like having siblings and sometimes I did feel the desire for a companion. It can be difficult knowing I have to be independent in finding my own identity and path in life. Maya and Miguel had a special close relationship because they were twins and they did everything together. The episode I remember the most was when Maya and Miguel had issues sharing their living space and fight when they bumped into each other. Maya is always trying to solve problems with crazy ideas like dividing the apartment with tape which did not end well. They prohibited each other from crossing the line no matter what. This eventually made them stronger and more motivated to work together to respect each other’s space.

This cartoon show represents my childhood because I grew up listening to lots of Spanish speakers at school and even in the cartoon shows I watched. I eventually could understand basic words and phrases in Spanish. This happened at a surprisingly young age. I remember when my mom told me a story about how when I came home from school in Pre-K I would start speaking Spanish to her. It is pretty hilarious to imagine a young me doing that. That happened because since English is not my language I had to be put in an ESL (English as a Second Language) class. Of course, in the city of Pasadena, there were not very many Asian people and an ESL class was full of just Spanish speakers. My first language is Vietnamese and I am not going to lie it is not perfect still to this day. I mainly spoke Vietnamese at home to my grandma, English to my friends and I heard lots of Spanish speaking around me. Through watching a show like Maya and Miguel, I was able to expand my knowledge from a very young age. The episodes had incorporated lots of English and Spanish which helped young kids like me at the time to encourage an appreciation for all cultures and languages.

In 1998, Disney released Mulan and it is a classic film that has influenced lots of young children around the world. This was the first strong and brave Asian female character that I could look up to. As a young Asian American child, I did not see cartoons that represented my community. It was not easy to naturally be proud of my family and culture. I did not look or act like everyone else.

As I grew up, I learned to be grateful for being unique and myself. It took me my entire life to learn that it is important to respect my differences and others too. Because no one is truly the same and that is what makes us human beings. Mulan was a perfect example of not conforming to the society around her. She was also the first to not fit in the mold of the princesses that came before her. She is more than a damsel in distress. She was not born into royalty neither did she marry a handsome prince. Still today, you see women are playing supporting roles to the main male hero. Mulan is her own heroine and she is an intelligent/legendary warrior who is not afraid to think outside of the box. She is most certainly brave enough to trust in herself and her mind. She understood she had the choice to do things against the traditional Chinese conformities. She does, however, pose as a male soldier but does not follow the masculine ideal either. Her character saves the day by challenging the gender roles in China compared to other happily ever after endings being saved by a man. What I find the most pivotal lesson I learned from Mulan is that everyone has the power, woman or man to define their self-worth. We have the choice to decide how we want to live our lives no matter if people are in our ears telling us otherwise.

Mulan is an inspirational animated film that I used to watch and I know I was not the only one who was greatly influenced by Mulan’s courage and strength. There is hope for our current society to keep moving forward in the right direction of embracing individuality. We should encourage our children to be themselves unapologetically.

In conclusion, every single animated film or show has a great influence on developing our minds from a very young age. Growing up in the United States as an Asian American can be confusing for a child. It is confusing because you do not fit in the Asian nor American standards. No one likes the gut-wrenching feeling of being out of place. Everyone wants to feel like they belong in this world. Children can often feel ashamed of their culture and how they look based on the typical “white American” characteristics. I have learned through watching Maya and Miguel and Mulan that it is okay to be different whether you are part of the Hispanic or Asian or any other community. Because of where I grew up I was surrounded by people who were not like me. Which is perfectly fine because no one is like me. We should all be proud of where we come from instead of following others because it is popular. It is important to value our self-worth and to recognize who we truly are instead of being someone we are not. “Be you do you for you”.

My Favourite Cartoons and Their Influence. (2021, Mar 15). Retrieved from https://studymoose.com/my-favourite-cartoons-and-their-influence-essay 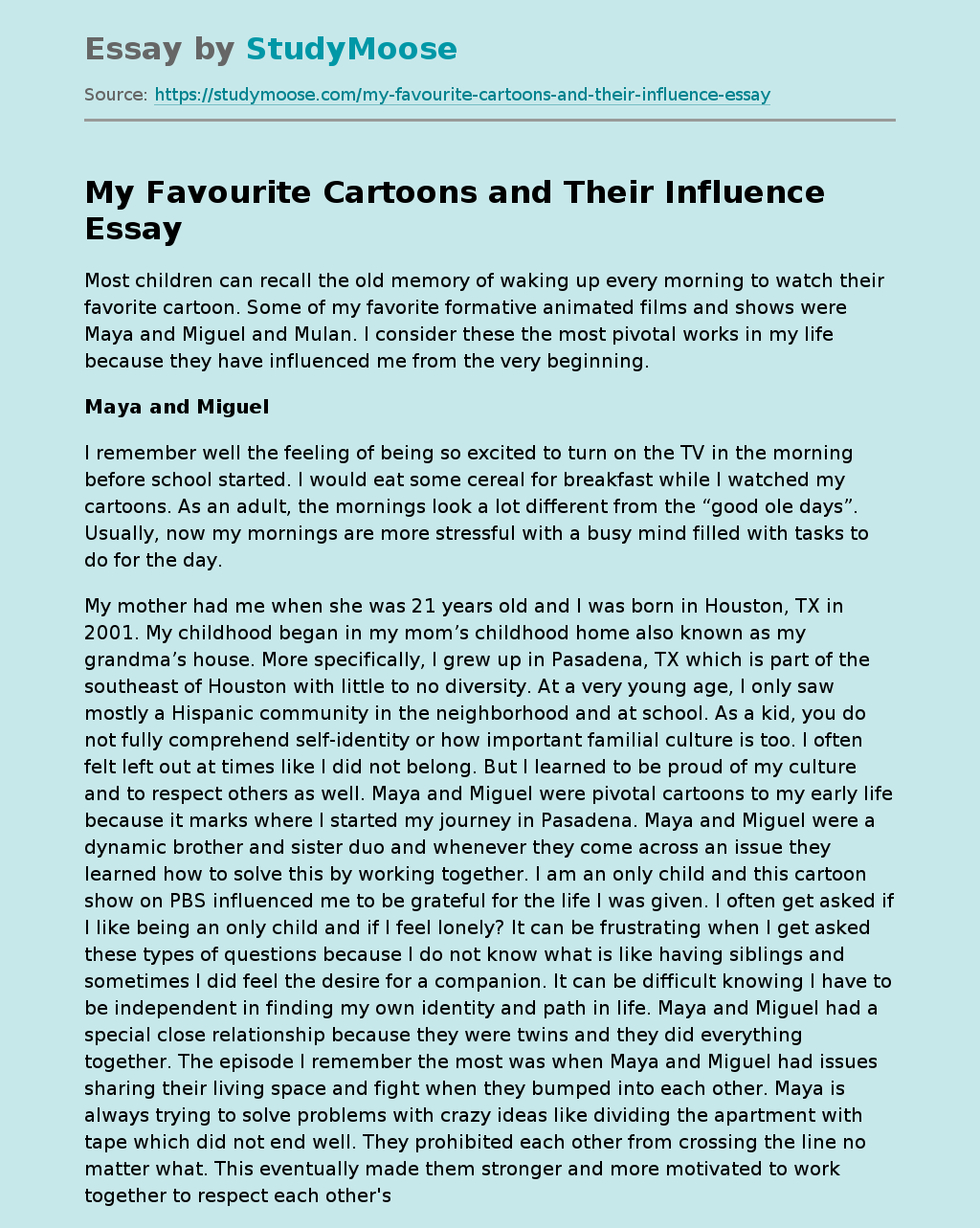