Influences of Cartoons on Children

Children watch on television a lot of kind of cartoons like Tom and Jerry, SpongeBob, Mickey Mouse and others. Many parents agreed today that every child is interested in cartoons. It is very good if a child watches only educational cartoons, but there are a lot of cartoons which have bad influences on children. However, nowadays children become addicted to watching cartoons and, as a result, there are a lot of debates about whether children are affected by cartoons more positively or negatively.

Don't use plagiarized sources. Get your custom essay on
“ Influences of Cartoons on Children ”
Get custom paper
NEW! smart matching with writer

Some people, especially elder people, state that cartoons in the Soviet Union were kinder, more colourful and harmless.

Unfortunately, these people claim that today’s cartoons have more violent acts that cartoons during their childhood. In contrast, younger generation mentioned that cartoons are not bad for children. Also, a research review on watching cartoons and language in the early years, conducted by Robin Close on behalf of the National Literacy Trust, found that for children aged two to five, good-quality educational television can have a positive impact on attention and comprehension, receptive vocabulary, some expressive language, letter-sound knowledge, and knowledge of narrative and storytelling (Close, 2004).

So, although, cartoons can be educational and entertaining, many people believe that modern cartoons are very violent, create false sense of reality and negatively affect the development of children’s social skills. Firstly, while watching cartoons, children’s brain processes a lot of violent acts.

There are a lot of children who suffer from mental and psychological diseases because of cartoons. Most people think that cartoons are colourful and harmless movies for children.

However, it is not true. Children from the age of two or earlier begin to watch cartoons. Unfortunately, they see some materials, which are not acceptable for their age. Also, most cartoons contain violence, which can affect child’s mind. One example of such kind of cartoon is Tom and Jerry. Tom always tries to hurt and catch Jerry, but usually he is the one who is injured. One of the studies indicates that boys are more affected by violent cartoons then girls (“Effects”, 2011). Also, cartoons can be addictive. Children spend more and more time watching cartoons and cannot live even a day without this process. Adults have to understand that cartoons with violence will influence child’s brain. So, cartoons can negatively affect children and lead to some diseases. Secondly, children are unable to make the distinction between reality and fiction, they cause harm to themselves by imitating what they see in cartoons. There are a lot of cartoons which show how some characters are jumping, diving and shooting each other.

In cartoons, people jump from high buildings and they do not have any injuries. After watching such kind of cartoons, children have an incorrect sense of real life. It can leads to some injuries or dangerous situations or even it can kill a child. According to Choma et al. (2004), for every hour of TV viewed per day, the risk of injury rose by about 34% in the children studied (p.5). Children can try to do what their hero did. “There are three major television effects on children : not sensitive to the pain of others, children who watch violence do not fear violence nor are they bothered by violence in general; and finally, kids might become aggressive and even can hurt others” (Choma et al., 2004) (p.3). Finally, children do not develop good social and communication skills. There is a growing body of opinions among professionals that an increasing number of children are suffering from communication difficulties. Children need to be confident communicators in order to have happy, fulfilled and successful lives. Verbal communication is the method used by the vast majority of people to communicate.

People use it to have their needs met, to indicate their likes and dislikes, to request information, to refute something, to socialize, as well as to establish and maintain relationships. The ability to communicate is the basis of social and emotional well-being. Children who have difficulty communicating often go on to develop behavioral problems, mainly due to their frustration at not being able to express their needs, participate in social exchange and achieve in education. These children do not ‘grow out’ of their difficulties as education progresses. However, there are a lot of educational cartoons on television which can give moral lessons and entertainment to children. Educational cartoon characters help children become comfortable to express their feelings. Children learn so many new things. When a child begins to watch educational cartoons he finds out a lot of new things before going to school. While watching cartoons, children try to repeat everything that their favorite character says. They try to speak in the same manner. After that they can tell it to other people. So, they improve their speaking skills.

Cartoons are also a source for entertainment. Each child spends around two or three or even more hours per day watching cartoons. A child from the time when he starts school until his graduation watches TV around 18,000 hours (Choma et al., 2004). Indeed it is real interesting for children to watch cartoons and it is real a good source for entertainment. In conclusion, adults have to understand that it can really influence a child’s brain and can push a kid to do terrible things, it can be dangerous for children because they try to do unreal things after watching cartoons. On the other hand, there are many cartoons which teach children new things which can be useful in future child’s life. So, parents should choose a good environment for their children which will protect them from some failures. Next generation is the future and adults today have to care about their future life.

Influences of Cartoons on Children. (2016, Apr 12). Retrieved from https://studymoose.com/influences-of-cartoons-on-children-essay 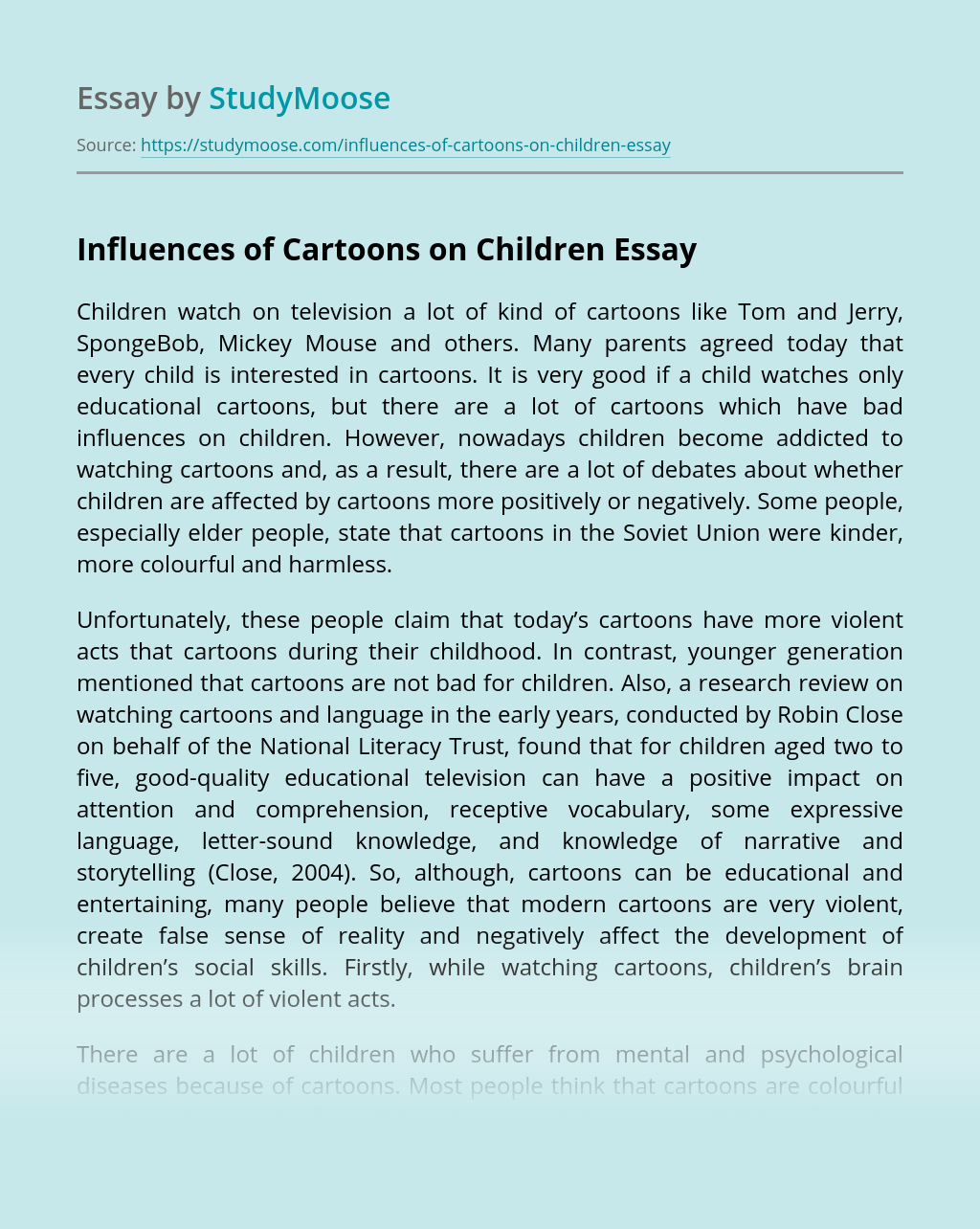