This report analyses the impact of external and internal influences

This report analyses the impact of external and internal influences on the business strategies of Marks and Spencer (M&S) between 1996 and 2002, and evaluates the factors affecting them.

The report basically identifies the main factors affecting the demand for M&S products by analyzing the weaknesses and threats faced by the company. It furthers the discussion by pointing out the changes, which the company tried to bring about in its marketing mix elements, branding strategy and value chain to enhance its market share and profitability.

Don't use plagiarized sources. Get your custom essay on
“ This report analyses the impact of external and internal influences ”
Get custom paper
NEW! smart matching with writer

The major finding is that M&S had successful business strategies and marketing plans. However, the company could not maintain these advantages continuously, and faced a slowdown during the period 1998-2001. The main factors that contributed to the slowdown were the insularity shown by the company, which made it less responsive to the changing market conditions.

What was to become Britain’s largest retailer began in Leeds in 1884 as a market stall. It was started by Michael Marks and later supported by Tom Spencer when they decided to set up permanent stores in UK.

Together, Marks and Spencer raised 600 pounds and set up a network of shops in the surrounding area that came to be called ‘Marks & Spencer’s Penny Bazaars’.

Until very recently M&S thrived by following a model that built upon Michael Marks and Tom Spencer’s original concept. Its staff viewed the company with pride and they and M&S’s suppliers all saw themselves as part of something very special – part of a collective.

It had built a reputation among customers for quality, dependability and classic, if functional, styling. It grew to over 70,000 employees, to be the most visible retailer in Britain’s high streets, to be the provider of 40% of all women’s underwear and 25% of men’s suits sold in the UK, and to be the first retailer in Britain to gross over ï¿½1billion in annual profits.

However, the past few years witnessed M&S fall on hard times in quite a spectacular fashion.

The report then describes the changes that M&S tried bringing about in the elements of marketing mix, i.e. price, product, place & promotion, and the elements of value chain, i.e. inbound logistics, operations, outbound logistics, marketing & sales, and customer services. Also, how these changes steered the brand management strategy of M&S remains an integral part of the discussion in the report. Read about fashion marketing concept

Where, Q – Quantity of the good in question

P – Price of the good in question

Differentiating the demand function w.r.t price, we get,

confirming the negative relationship between Price and Quantity demanded of a good.

* Change in price of relative goods

* Change in income of the consumers

* Change in seasons or weather conditions.

* Change in tastes of the consumers

There was a general trend amongst the shoppers to dress up in a manner so as to look younger, and not vice-versa. But the clothing line of M&S failed to appeal to the customers in this regard. Hence, there was a decline in the demand for the kind of clothes sold at the M&S stores, which was a result of a leftward shift in its Demand Curve.

This report analyses the impact of external and internal influences. (2020, Jun 02). Retrieved from https://studymoose.com/report-analyses-impact-external-internal-influences-new-essay 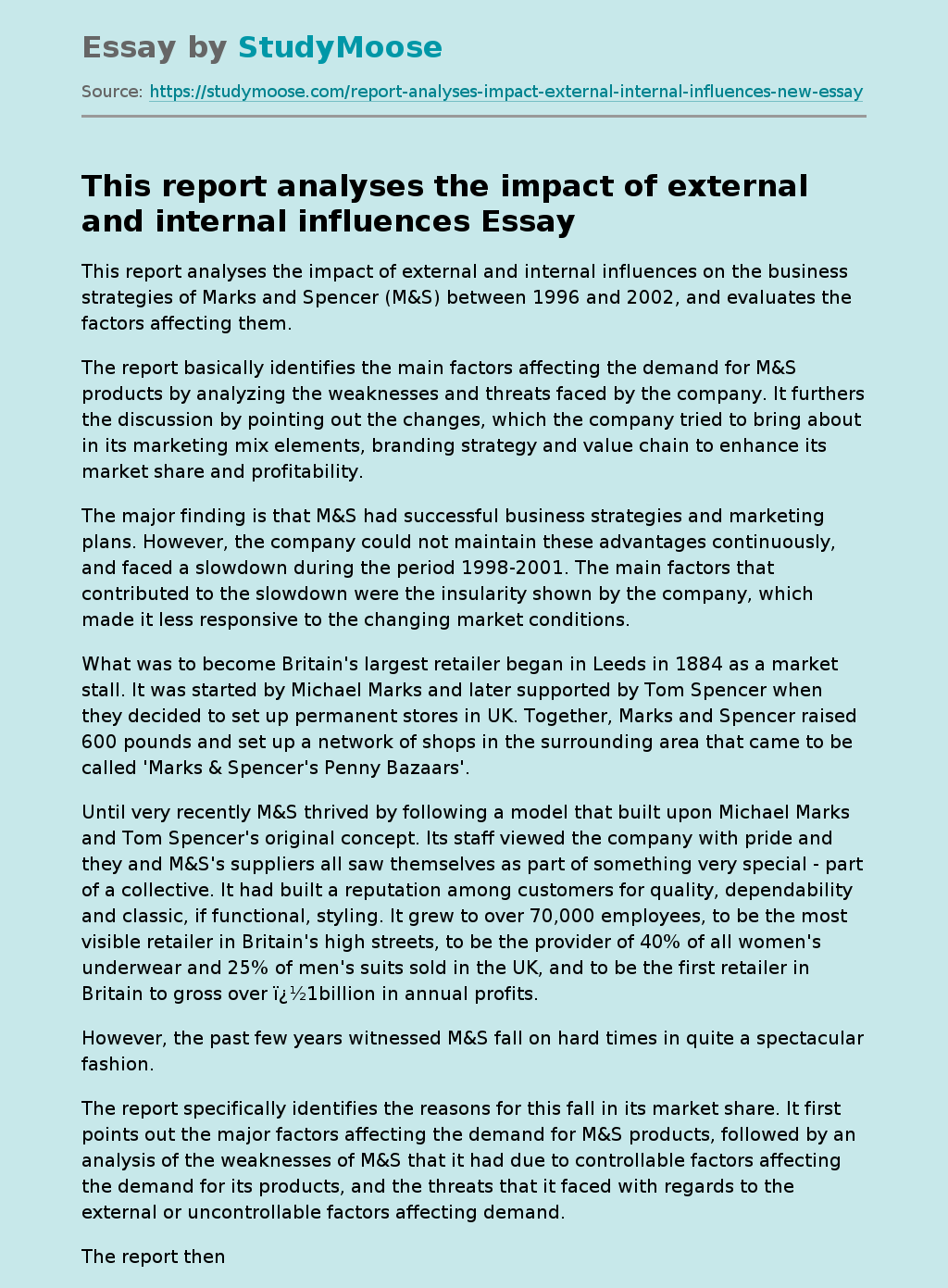