Internal and External Factors at Wal-Mart

In 1962, Sam Walton opened the first Wal-Mart store and the retailing giant has been rising to success ever since. Various factors have played an integral role in the success of Wal-Mart, but without the strong execution of the four functions of management, Wal-Mart would have failed like many others. This paper will discuss in detail the how internal and external factors affect the four functions of management.

In 1993 Wal-Mart formed their International Division which was crucial to their success because they needed to remain competitive with other industry giants.

Turn in your highest-quality paper
Get a qualified writer to help you with
“ Internal and External Factors at Wal-Mart ”
Get high-quality paper
NEW! AI matching with writer

When Wal-Mart entered a new country, careful planning was conducted to meet the demands of that specific country. A recent special on the history of Wal-Mart showed their expansion into China. Wal-Mart’s president did not realize that most families in China do not own a washer and dryer. Therefore, Wal-Mart removed all their detergents designed for machine washing and replaced them with detergent especially for hand washing.

Wal-Mart brings thousands of people into their stores worldwide who are looking to begin a new career, as well as, shop.

Without the organization of each department within Wal-Mart’s facilities, harmony within the company would crumble. Employees from every department work together to achieve the goals set for each store. Wal-Mart’s goal is to be the largest retailing organization in the world, and has achieved such status by adhering to strict organizing standards.

Wal-Mart believes that in order to be a good leader, you must inspire trust and be rewarding. A statement Sam Walton once said is the motto Wal-Mart employees live by: “It’s more important than ever that we develop leaders who are servants, who listen to their partners – their associates – in a way that creates wonderful moral” (walmartstores.

com, n.d.). This way of thinking has been passed down to all employees and has proven to create a productive work environment.

Wal-Mart continuously finds ways to guarantee their over-all success by controlling and monitoring the plans they set out. Ideas that work in one market, may not work in others. In order to find what works best for each market, new ideas are implemented and tracked for success. Ideas that prove to be successful can then be tried in other markets. In order for Wal-Mart to continue to grow, dynamic ideas are required of management frequently.

TechnologyTechnology played a big part in the globalization of Wal-Mart. By 1975, Wal-Mart had over 125 stores and $340.3 million in sales. At this time they leased the IBM 370/135 computer system. This system allowed them to maintain inventory control for all merchandise in the warehouse and distribution centers, including prepare income statements for each store. From 1975 to 2004, Wal-Mart experienced a number of changes relating to technology which included in 1983, the company began using the bar coding system which identifies to the system what item the customer is purchasing and its cost.

In 1987, they completed the largest satellite communication system that linked the company as whole with two-way voice, data and one-way video communication. (2006)As the company continued to experience phenomenal growth they had to look at newer forms of technology to keep up with the development of so many stores. In 2004, the company announced that it would deploy the radio frequency identification (RFID) technology on January 1, 2005 (2006). This technology allowed their central management system to track new shipments, product purchases, and alerted them when items need to be re-stocked via a wireless communication (Plunkett, 2008).

Wal-Mart uses technology to enhance all areas of its business. A one-hour online photo center, for example, allows customers to download photos and pick up the photos at the store of their choice within an hour. In the past, the customer would download the photos and wait for them to be mailed. On the music side, a pilot program involving in-store kiosk at 100 stores lets shoppers buy one song off a CD without purchasing the whole CD. The kiosks let shoppers create custom CDs that can hold up to 100 songs.

The finished CD is then picked up at the one-hour photo center. In pharmacy, new technology allows personnel to retrieve a patient’s prescription information at any location simply by knowing the patient’s name and type of medication. The patient does not have to know his or her prescription number, insurance information or at what store the prescription was originally filled (Wal-Mart Technologies Enhance Visible and Behind-Scenes Services, July 2005).

InnovationWal-Mart’s continued drive towards innovation sustains its global footprint. Wal-Mart continues to be a leader in the business world. It’s evident that Wal-Mart strives continually to introduce new and different ways to market their business and uphold competitive advantage and introduce new ways to build relationships with employees, customers, and the humanitarian world.

Wal-Mart is now aiming their innovative techniques towards the up-in-coming green trend. The company has created experimental stores that save energy, conserve natural resources, and reduce pollution. Just one example of Wal-Mart’s focus to conserve natural resources and reduce pollution is their efforts to only sell concentrated detergents. This effort is estimated to have an impact that will save more than 400 million gallons of water, more than 95 million pounds of plastic resin, and more than 125 million pounds of cardboard (Walmart.com, 2008).

These are just some examples of Wal-Mart’s innovative spirit. Wal-Mart’s clear innovative drive continues to move the company into new and exciting
ventures.

Now the internal and external factors that impact the four functions of management (planning, organizing, leading, and controlling) at Wal-Mart come from all parts of the company such as: the board of directors, associates, suppliers, and customers. For example, the Wal-Mart web site states that their “…commitment to Diversity and Inclusion helps…” them “…build and retain a diverse workforce and supplier base” and that commitment is extended “…into the communities where…” they “…work and live through various community outreach programs” (walmartstores.com, n.d.). In addition Bateman & Snell (2007) express that “…you should devote adequate attention and resources to all four functions” of management (p. 18).

The Wal-Mart web site indicates that the company values diversity and have made it part of their business plan which is part of their success. Now with that in mind, Wal-Mart has recently been recognized as one of the “Best Companies for Asian Pacific Islanders” by the Asian Enterprise magazine, which offers a good indication that Wal-Mart has devoted adequate attention and resources to the use of all four functions of management. Now a note from the successful retail giants:As the world’s largest retailer, we value diversity and foster a working environment that enriches the personal and professional experiences of our associates, promotes excellence, and cultivates the intellectual and personal growth of the entire associate population. We make diversity part of our business plan, ensuring we can continue to be a global leader in all aspects of Diversity and Inclusion.

(walmartstores.com, n.d.)EthicThe American federation of labor-congress of Industrial suggest that Wal-mart was intended to be sex discriminative to poverty-level wages with the term Wal-mart on their problem to drive some business away and they was hopeful that it was going to be enough to alter the companies policies. This is supported by the center for community and corporate ethics. Wal-mart was tired of this allegation, so they launched a blitz ad in about 100 newspapers, to let everyone know that “Wal-mart is working for everyone.” “Spokesperson Sarah Clark denies that the company’s low prices depend on low wages.” Bernstein (2005).

The labor leaders believe that the AFL-CIO wants Wal-mart to look bad with a new publicity campaign. The Wal-mart labor’s plans have stayed the same because of all the negative publicity and it has hurt the employees’ morale of the Wal-mart Inc. Chris Ohlinger, “CEO of Service Industry Research Systems Inc,” Chris Ohlinger taking a survey on the customers that use to shopper there and do not stop any more because of the public criticism. Wal-mart low prices remain low to help the working poor. “Wal-mart CEO H. Lee Scoot, asked the employees “to take the moral high ground” on the further criticism. Wal-mart had just settled with about $11 million on hiring illegal immigrants to clean the stores. This is one the biggest sex discrimination lawsuit in the history of retailer just because the grass-roots organizations do not want this retailer in the area.

“In a five-minute video message to Wal-mart’s workers, Scott told employees that they were expected to do the right thing every time, and he encouraged them to report unethical behavior to superiors or use the company’s ethics hotline, according to spokeswoman Mona Williams.” “It is a mark of our strength that when we uncover issues, we deal with them, do the right thing and are a stronger company as a result, “Scott said in the telecast to 1.2 million workers.” Grant (2005)In conclusion people should not always believe what is told to them in the public room, people have to evaluate for themselves and stick to their ethic believes.

Internal and External Factors at Wal-Mart. (2016, Jul 30). Retrieved from https://studymoose.com/internal-and-external-factors-at-wal-mart-essay 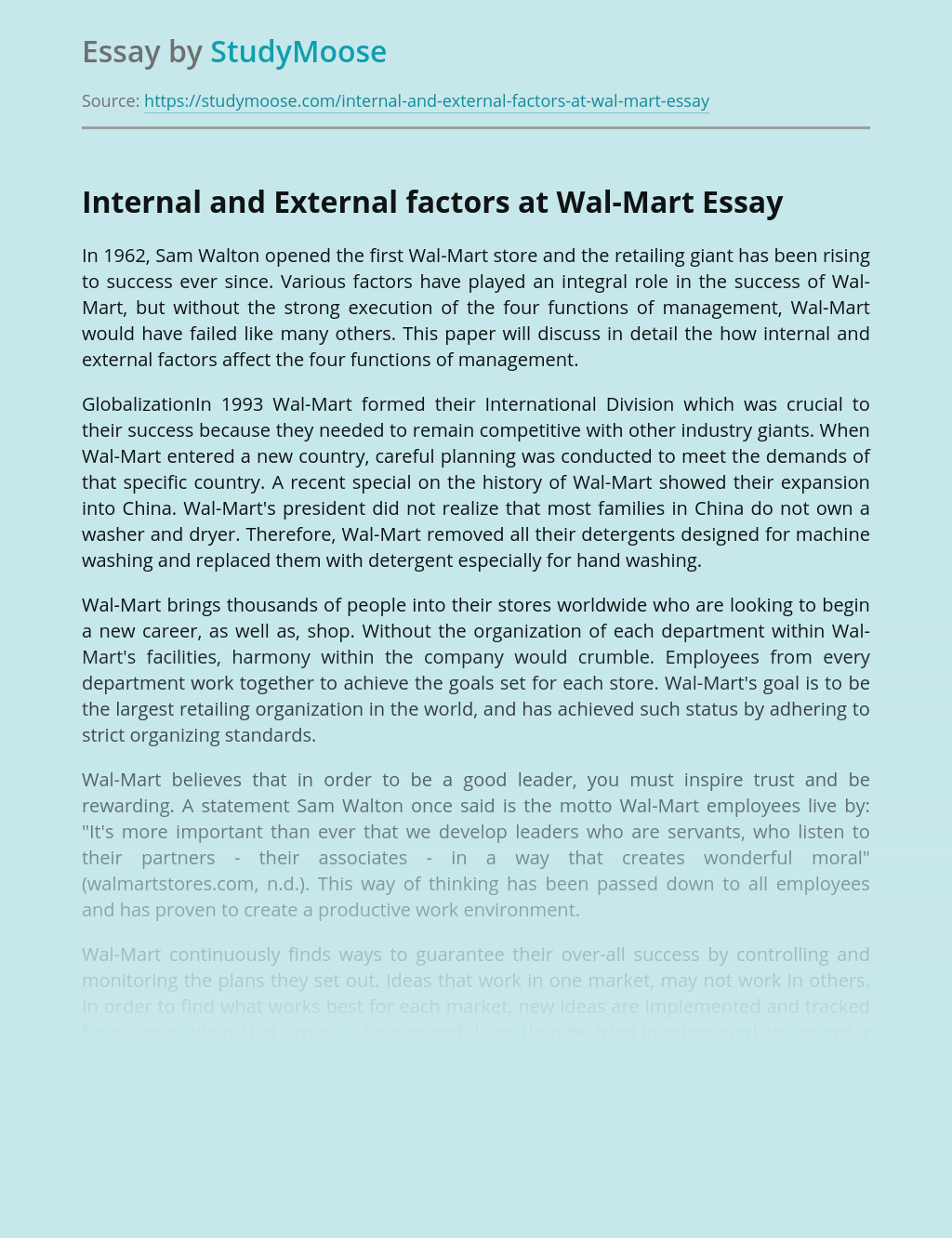 Turn in your highest-quality paper
Get a qualified writer to help you with
“ Internal and External Factors at Wal-Mart ”
Get high-quality paper
Helping students since 2015
Stay Safe, Stay Original