Does Art Influence Culture, or Does Culture Influence Art

Does art shape the mood and dependency of culture, or does culture shape the perspective of art? Art does not only mean the literal paintings, and physical art. Music, poetry, sculpting, and theatre, are also in the category of art, and people like William Shakespeare and Matsuo Basho have definitely left their mark on the past and present’s cultures with their expressions of art.

Art and culture are not black and white concepts; there is no way to say that one affects the other absolutely.

Don't use plagiarized sources. Get your custom essay on
“ Does Art Influence Culture, or Does Culture Influence Art ”
Get custom paper
NEW! smart matching with writer

But they do affect each other, in many instances. For example, art reflects culture in that the society and environment in which the form of art was created may have affected the person, place, and reason behind why that piece of art was created. It can show the economic status of that nation in the art and the materials used to make it. On the other hand, culture reflects art, because art can act like a beacon or catalyst.

It motivates and influences people, in the way that a good song can lift a spirit or induce feelings of sadness. Aristotle once said, “The aim of art is to represent not the outward appearance of things, but their inward significance.” People perceive art on a personal level, and relate it to themselves or their life in order to form a sort of connection. Art and culture are invariably linked, constantly pushing and pulling the advancement of one another.

A good example of art reflecting culture in history is the Renaissance Era.

During the Renaissance, Europe had an immediate renewal in art and learning. Europe was recovering from the bubonic plague; there was a rejuvenation of wealth in prosperity. There was a somewhat excess in wealth, which resulted in many people becoming patrons of the art, or wealthy people that sponsored artists to continue their craft.

They could afford to spend their money and invest in an upcoming artist, or buy his paintings. Due to the sudden rise in patrons, artists were becoming famous, there were suddenly many more artists being employed to work in public buildings and sculpt people. For example, Michelangelo was paid to illustrate the Sistine Chapel, and also sculpted. The Renaissance scholars brought back the original, classical forms of artwork from the Roman and Greek times, because they grew tired of the simplistic, archaic methods of the Middle Ages.

It also changed the subjects and ways that the artists created their artwork. Before the Renaissance, everything had been about religion and ideological faith. The Renaissance brought about new ideas and concepts for artists, such as Michelangelo’s sculpture, David. It depicts David moments before the biblical battle between the Philistines and the Israelites, where he is depicted as powerful, yet graceful. Artwork like this began to show humanism, humanities achievements and potential.

Also, the Renaissance changed the way that writers wrote their literature. Writer’s like Dante and Francesco Petrarch had begun writing in the vernacular, or their native languages, being Italian and Latin instead of only the traditional Latin.

But art and culture are not only linked in the Renaissance they are also a large portion of the Muslim world at that point. Art was used in the Mughal Court, exceedingly so, in the form of illustration in scripts. They would have small, detailed paintings called “miniatures” in books. In times of wealth, artwork would invade the empire’s temples, market places, and mosques. The artwork reflected the deities of the mosques and temples, while the artworks in the more common places were adorned with art of different styles from different countries. While the art was beautiful and elaborate in India and other major Muslim empires, it was also extremely expensive.

The people of the art-obsessed nations usually had to pay hefty taxes to help finance public art projects; which meant sometimes having taxation abused to pay for huge technically unnecessary architectural buildings. An example is the Taj Mahal, a tomb for Mumtaz Mahal that Shah Jahan, one of the rulers of India, dedicated to his lost love in her memory. This sentimental gesture cost the tax payers, and his people began to starve.

Art in China was intricate and just as awe inspiring as the rest of the worlds, but this is a good demonstration of how culture reflects artwork. Artwork in Europe was more about perspective, and new ideas. Chinese art valued technique and diligence over creativity and imagination. Even in pottery, technical skills and experimentation won over creativity. Kabuki was a popular source of entertainment for families with low income.

It unified Chinese society with a common past time, and taught about Chinese history and cultural heroes. In the later 1700’s, Japan also focused on heatre by using kabuki. Kabuki was an elaborate show consisting of music, exaggeration, exciting costumes and dance. They also read haikus, which uses five, seven, and five stanzas to use the senses to describe senses, smells, feelings, or sounds.

All in all, culture and art do affect each other. Culture shapes the texture and subject of art, such as religion and portraits. While art affects culture in that it uses art as a way to depict wealth, as well as used for decoration and symbolism, and as a catalyst and form of release for the philosophical savants of that era. Art was also used to preserve the times of those places, and to preserve the methods and customs of their cultures.

People all over the world use art for the same reasons now, and will continue using art for the same reasons. The impact that the shaping and reflecting had on the arts from long ago is evident today from in caves, to the Taj Mahal, to the Sistine Chapel. If it weren’t for the mutuality of art and culture, the world would have developed in a completely different way, and it would be a very, very dull place without the history and depictions of the olden times.

Does Art Influence Culture, or Does Culture Influence Art. (2016, May 16). Retrieved from https://studymoose.com/does-art-influence-culture-or-does-culture-influence-art-essay 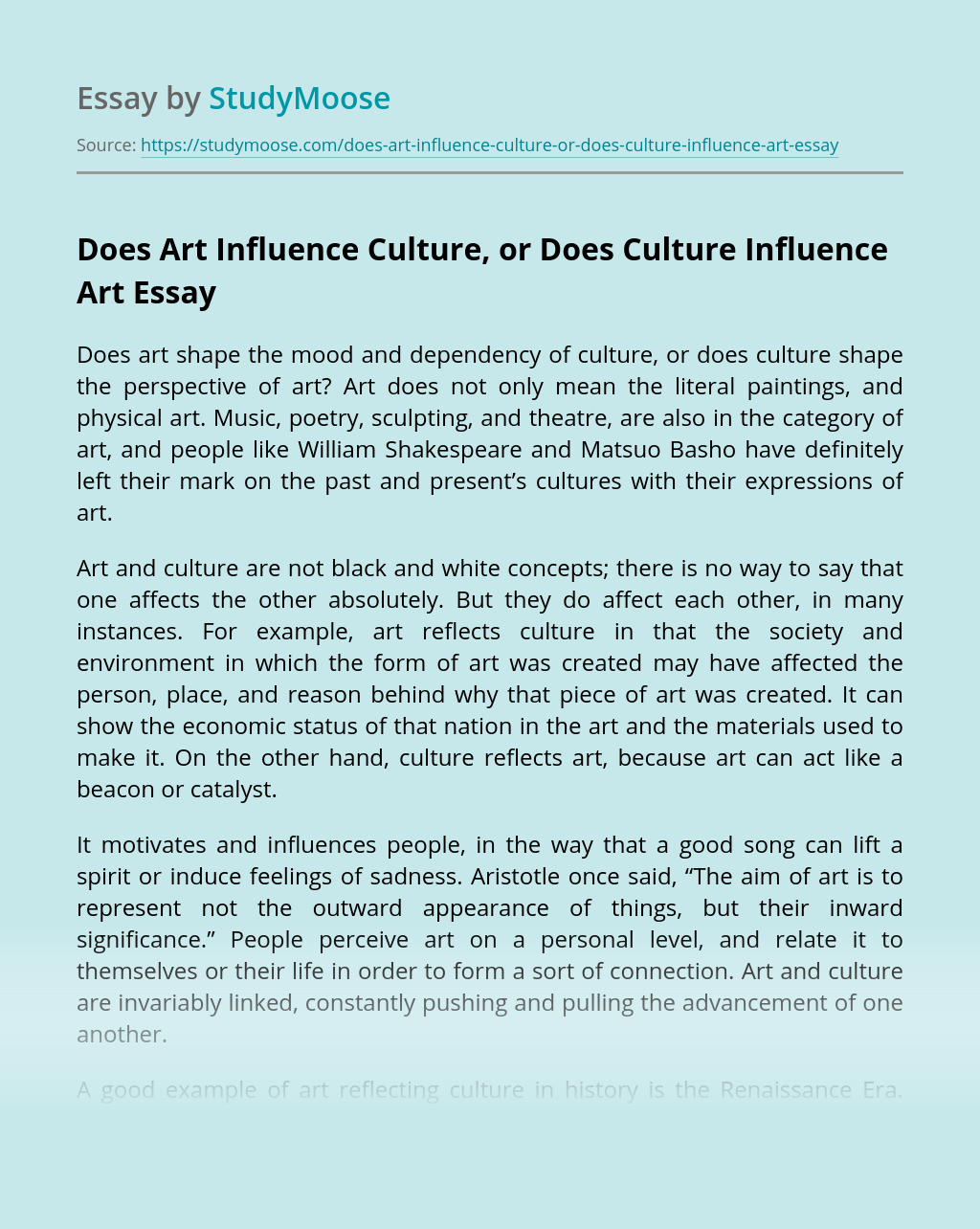