Super Columbine Massacre RPG (SCMRPG) is a case of art imitates life. Danny Ledonne patterned his game after the infamous Columbine tragedy. He created characters and situations which are very similar to those that transpired on that fateful day. The question is, up to what extent does art start and stop imitating life? Are there any boundaries that should not be crossed? Are there any rules that should not be broken? These were some of the questions that Ledonne has been trying to answer regarding his game.

He was criticized for being morally insensitive towards the feelings of those who were involved in Columbine. In this case, with regards to moral grounds, should a filmmaker or developer cease to create anything inspired by actual events? According to the one of the posts in Ledonne’s website, SCMRPG is one of the most important games in gaming history. It has discussed a significant awakening that no matter what anyone had done, in reference to the quote “we should have checked their rooms” voiced by one of the gunmen’s parents – there is nothing that could stop Harris and Klebold in their plan.

It also showed how things started for the two boys and this sociological way of representing Harris and Klebold through SCMRPG might be a first step towards acceptance of video games as a legitimate medium for the expression of serious thoughts. SCMRPG also comprehensively dealt with the psychological profiles of both Harris and Klebold, which no one had ever done before (www.

columbinegame. com). It has been said that the actions of Harris and Klebold were brought about by watching violent video games, which is an example of life imitates art.

The pattern of execution and the detailed plan of going about the killing were blamed on the detailed video games as well as the music these boys listened to. But up to what extent can we blame art for the actions of a spectator? As Ledonne answered this question in relation the Dawson College shooting incident, he emphasized that merely playing a game that looks archaic does not encourage someone like Kimveer to go out and kill. In fact the game was devoid of all the gory details that gamers would typically want. Games do have effect on teenager violence but it’s not the only one to blame for it.

The columbine massacre was a disaster waiting to happen. It just so happened that the 2 kids who committed the atrocious act were playing video games and that their favorite band was Marilyn Manson. The increasing incident of kids committing suicide due to bullying is alarming. As a coping mechanism for these 2 kids they wanted to hurt those people who hurt them but as kids, they made a very bad decision and very bad planning that they hurt other people as well. Klebold and Harris lost their direction in life and were not appropriately guided on how to overcome teenage emotions such as inadequacy and inferiority complex.

Conclusion Super Columbine Massacre RPG was created to give gamers a feel of what Eric Harris and Dylan Klebold felt, with the intent of preventing another Harris or Klebold. However, moving aside artistic expression and the intent to save “potential” Harris or Klebold through human contact, looking at the game as an avid fan of computer games – there is not much to see actually. The 16-bit image that moves up and down and jumps from time to time gets a little bit boring. Nonetheless, the conversation between Klebold and Harris are a must-read.

Ledonne had thoroughly researched the game that 80 percent of the dialogues were taken from Harris and Klebold’s own writings. The sounds used are a bit better than regular midi since it utilizes popular music which could actually make the “thinking” moments of the characters very effective. Too many literature have been written about the reasons why Harris and Klebold created such mayhem, but too little had been said about how these two boys were as much as a victim like those people they gunned down in Columbine.

Almost as always, issues were being discussed in forums, articles were being published and documentaries were being aired. But, one media form that hasn’t been utilized till now was the gaming world. Ledonne wanted to change that by turning the silly world of gaming into a platform of more serious topics. He did so by creating SCMRPG. Ledonne on an interview by the Washington Post said that he would not create another game. SCMRPG was created with the intent of generating discussion and presenting a unique perspective on the events of Columbine.

This may not be the future of gaming, but it is a step towards the future of how games will be treated and viewed in our culture–as artful, meaningful objects which represent the thoughts, ideas, dreams and nightmares of a unique creator (http://alt-games. com/? p=28). With regards to the objective of the game, I believe that it has amassed the intended attention and created an awareness regarding video games and violence. Ledonne had successfully generated a forum where families and loved ones of the Columbine incident could air their grievances (even though at the expense of the game). 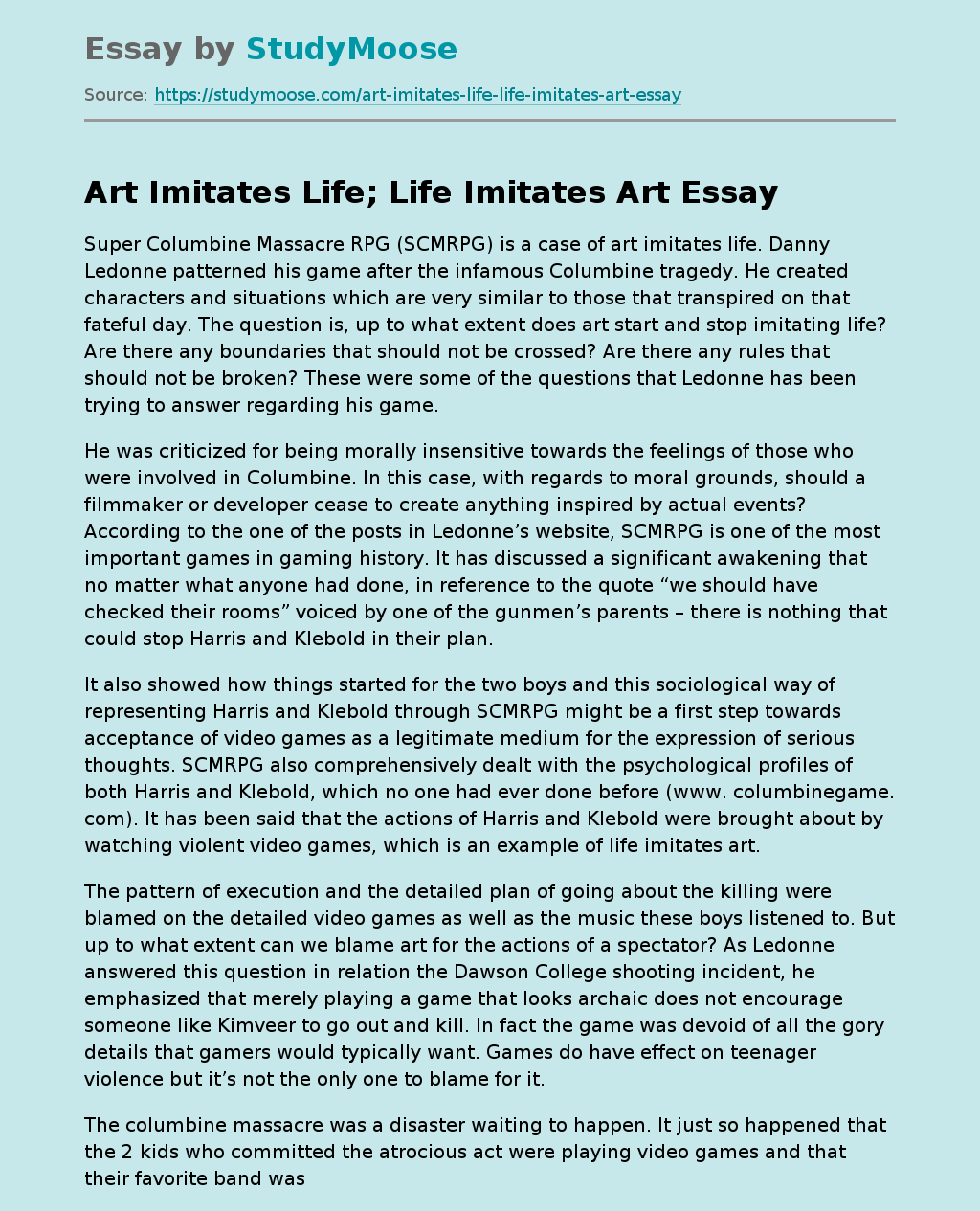