Relationship analysis of the Baroque and Romantic Art Movements

Baroque art movement started in the 17th century extending to early 18th century and led to the Rococo, Neoclassical and then to Romanticism art movement. The styles of Baroque period began in Rome, Italy and later spread to most parts of Europe. Romanticism movement began in Europe in the late 18th century and extended to mid-19th century leading to Realism art Period. The name Baroque is believed to have originated from the word “Baroco” that means irregular pearl though the art Period doesn’t translate to the PEARL, but the irregularity of the Baroque styles deviating from the preceding art periods (“Baroque,” 2014).

Don't use plagiarized sources. Get your custom essay on
“ Relationship analysis of the Baroque and Romantic Art Movements ”
Get custom paper
NEW! smart matching with writer

The Baroque period was characterized by elaborate and extravagant use of ornaments, color and emotion. Religion was a significant component of this art period, and the methodology was advanced by the Catholic Church in response to counteract the reformation of Protestantism.

The Baroque “irregularity” style was also manifested in music by relying on convoluted harmonies and spontaneous improvisation. Many of the music compositions from this period celebrated God and religion (“Movements in the Humanities: Baroque & Neoclassicism,” 2014). The name “Romanticism” to describe the art period does not directly translate to its root word “Romance” in association with “love” but instead meant the idealization/glorification of complex subjects. The Romanticism art movement augmented ordinary events into extraordinary. Romanticism movement is almost impossible to define concisely since it focused on the glorification of mystical convoluted subject matters like heroism, liberty, survival, despair and feelings that appeal to humanism but yet very subjective.

This period focused on nature, emotional appeal and imagination versus the scientific systems, creativity and novelty versus classical/conventional rules and self-expression versus traditional religious concepts which ultimately led to Protestantism (“Movements in the Humanities: Romanticism, Realism, Modernism,” 2014). Music, sculptures and paintings from this century stressed emotion, passion and exotic settings with dramatic actions, focusing mainly on heroic and political matters. Artists used intense colors and loose brush strokes to exhibit mood and majestic expression, all geared to exude a load of emotion. There were similarities between the Baroque and Romantic art periods that cut across a wide array of disciplines including architecture and painting aesthetics. Both movements used arches in their architecture as seen in the Baroque “Hall of Mirror” and in the Romantic “Crystal Palace.”

Artists from both movements used variation of light and shade to create emotion as seen in Romantic painting “Wanderer above the sea of fog” by Casper David Fredrick, 1818 (Friedrich, 1818) and to create volume in Baroque painting “The night Watch” by Rembrandt Van Rijin, 1642. Though both movements used color contrasts of light and shade as mentioned, the Baroque artists utilized this style more whereas the Romantics utilized intense colors and loose brush strokes more (“Romanticism,” 2014). There was also a feeling of movement and energy displayed in paintings from the Baroque “Rape of the Sabine Women” (“Nicolas Poussin | The Rape of the Sabine Women (1637-1638) | Artsy,” n.d.) and the Romantic “Raft of the Medusa” (“Théodore Géricault | The Raft of the Medusa (1818-1819) | Artsy,” n.d.) Themes of the two paintings mentioned above were dramatic and dream-like, both expressing subjects of despair drawn from the concept of social aspects that were present in both the Baroque and the Romantic art movements.

The Baroque and Romantic art periods were also explicitly different on many levels. The Baroque era reigned during the Catholic Church counter-reformation. Styles and characteristics of this period focused on depicting religion and heavily utilized biblical themes. On the other hand, the Romantic era was in the center of the revolt against Catholicism and classical orthodox elements. Styles and characteristics of this age mainly focused on individual uniqueness and self-expression. The sculpture of David finished in 1624 is an example of the Baroque’s “all things” religious and “Liberty leading the people” by Victor Delacroix is symbolic of liberty and heroism, which were significant components of the Romantic era. The use of ovals and circles in the Baroque architecture exhibited some of the other differences between these periods with a perfect example of St Peter’s Basilica completed in 1626, in contrast to sharp lines used in the Romantic Palais Garnier Opera House completed in 1875.

Another bold difference between the two art movements was the use of extravagant ornaments and variety of materials. The Baroque’s “Hall of Mirrors” is a good example where mirrors, bronze and crystal chandeliers were used to achieve a sense of grandeur compared to the Romantic “Crystal Palace.” This architecture was a simpler design built entirely with glass, a perfect example of originality that was a fundamental characteristic of the era (Comparison of Baroque and Romantic Era Art, 2013). Romanticism had enduring impact on the styles and characteristics of the art movements that followed. Artists today still revere nature as displayed in a 21st century piece, “potential utopias” by Nils-Udo with characteristics of movement and mystical illusion (Mok, 2009).

Another lasting impact of Romanticism is the heroic and iconic characteristics displayed in the sculptures of the era. A good example is the “The statue of Liberty” dedicated on 1886 with a broken chain on the feet. This mood reflected in the “US marine Corps Iwo Jima Memorial” sculpture designed by Felix De Weldon in 1945, both perfect examples of an embodiment of Freedom. Art movements following the Romanticism period emulated the component of originality/creativity and individual expression to show skill. Realism like the previous period Romanticism was also a revolt spurred by the unsettling politics and social issues of the era. Both these eras following each other focused on the effects of nature to the society with a focus on injustice to the marginalized class.

There were vast, and conspicuous social status differences as a result of the new economic era at the time. The era following the Romantic movement sprung a formidable cynic attitude defined by people who didn’t believe in the abstract style but instead viewed their world through the prism of realism. In conclusion, the Romanticism revolt against the classical conventional notion of the Baroque movement repeated itself as Realism concepts rose against the Romantics idealization characteristics. All the mentioned art movements contributed to the advent of each succeeding period as they transitioned from one art movement to another.

Relationship analysis of the Baroque and Romantic Art Movements. (2016, May 01). Retrieved from https://studymoose.com/relationship-analysis-of-the-baroque-and-romantic-art-movements-essay 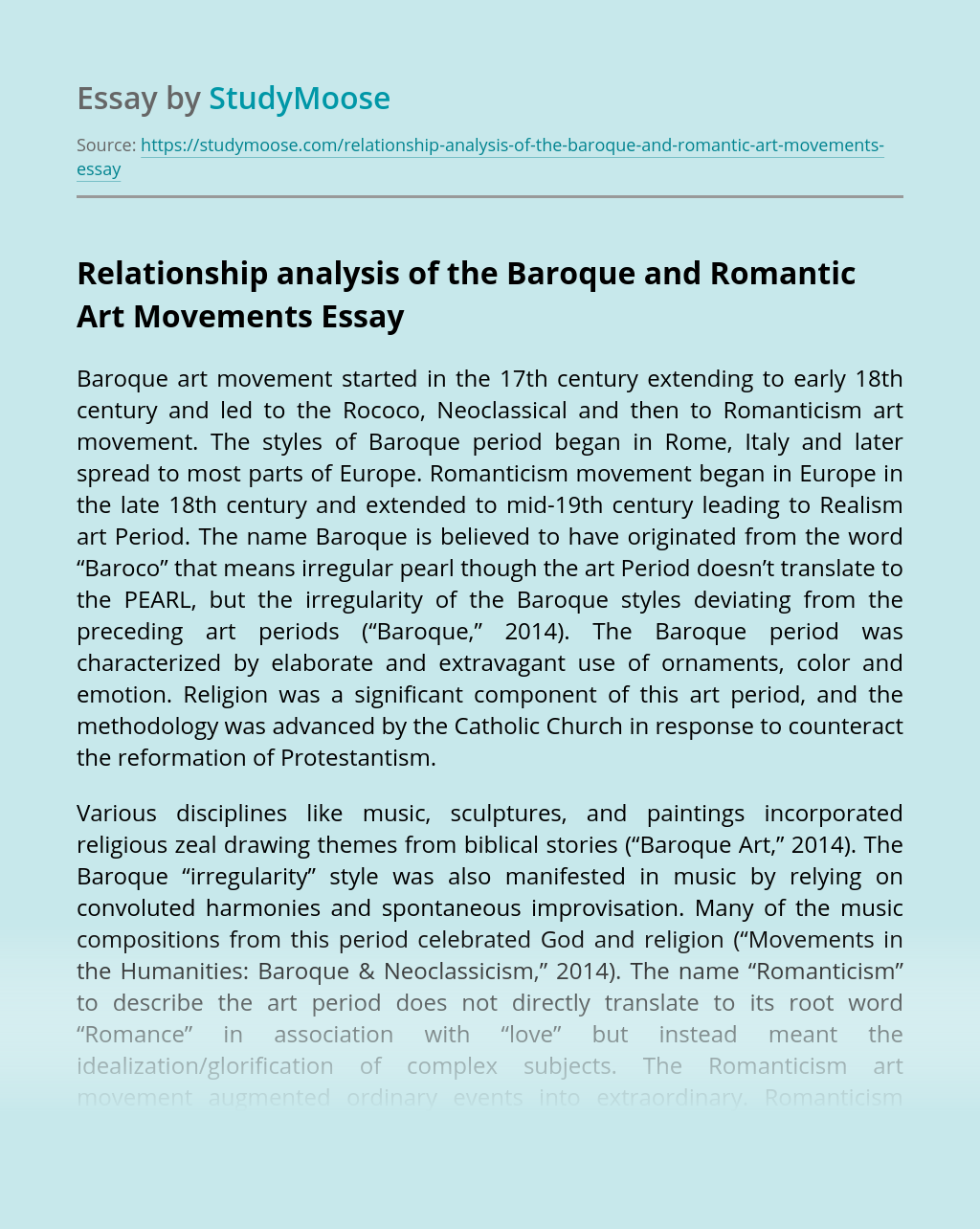