Baroque Opera Through the Ages

Baroque is defined as a historical period from about the start of the 1600s, through about the end of 1750. It is expressed as a style of music, art, and architecture which flourished in Europe during this time period. In this essay I will be defining what exactly Baroque Opera is, where it originated from and show those whom expressed this defining style. At the very early start of opera, which was pre 1600s, the first piece to be credited was written by Jacopo Peri called “Dafne”.

Don't use plagiarized sources. Get your custom essay on
“ Baroque Opera Through the Ages ”
Get custom paper
NEW! smart matching with writer

In this period many Florence intellectuals deemed art of their time to be inferior to the time of the Greeks, which led to the spawn of Opera music.

Dafne was composed by Peri, but he was not alone as he was joined with the help of a poet named Ottavio Rinuccini and a fellow music patron named Jacopo Corsi. Although this was not all too similar to that of the Greeks, it helped create a new style that would last through the ages to what we know today as Opera.

Antonio Vivaldi was a composer during this period, manly known for his concertos “Four Seasons”, “Opus 3”, and his many student exercises. Antonio did not get his start as a composer, but was ordained as a priest in his early adulthood. In times during his writing and most of his employment, he was a teacher at orphanages of female students.

It is seemly obvious that many composers, such as Antonio, were very knowledgeable and articulate. The orphanages were not normal ones, but those of noblemen and their mistresses.

Arcangelo Corelli was not just another composer of the Baroque time, but a violinist and teacher as well. He was known very well for his period as an exceptional violinist as the most popular instrumental music, equally to his acclaim as a composer. His compositional style was built by contrasting two differently sized groups of instruments, such as one group of two violins and a cello and a larger group of a string orchestra. His most know works, which are well known today, were not allowed to be published during his lifetime.

Some of his works were in six opus, which composed of sonatas and trio sonatas. It is said that without the success of Corellis models, it would have been impossible for Handel, Bach, and Vivaldi to have given us their masterpieces. George Frideric Handel is one of the most known Baroque composers, he is known for his many works. A few examples of his works are: “The Cuckoo and the Nightingale” written in Concerti Grossi Opus 3 and 6, “The Triumph of Time and Truth”, “Messiah”, “Saul”, “Giustino”, “Comus”, “Judas Maccabaeus”, and “The Harmonious Blacksmith”.

He was not destined for music according to his father, but for law. This was less than true, as his own musical talents over powered that temptation. He gave private lesions to support himself at the younger ages after eighteen. While listening to #1 Overture from George Frederick Handel’s “The Messiah”, it becomes very clear what Baroque style is. The defining sound the string section with the long melodies, all while having a dynamic contrast. “The Messiah” combines scriptures of the New and Old Testament, which concern prophecies of a savior or “Messiah”.

Throughout the years, this piece has become a standard in the winter and Christmas holiday seasons. Such overtures have been transcribed into arrangements lead with a Choir, such as done with the Chorus of “Hallelujah”. Johann Sebastian Bach is very well known today by many and especially by those in musical classrooms. Today we know him for his musical arrangements as a composer, but he was also a very talented organist, violist, violinist, and harpsichordist.

Some of his works include: the Mass in B Minor, the St John Passion, French Suites, The cello Suites, and the Brandenburg Concertos to name a few. J. S. Bach had written over three hundred pieces of music, although he preferred studying music and play instruments more than writing them. One piece that quickly jumped out while listening was Bach’s “Toccata and Fugue in D minor”, which is widely used today by many horror films and video games. One way this piece contributes to the Baroque style is by its elody, where the opening melody is continually played throughout the song in several sections. The mood of this composition is unified from the start and at the end, where it started and finished at the same mood. While working on this essay I learned many things on the contributions of these composers and their impacts on the Baroque style. One can conclude the fact that these composers were well educated, yet very articulate. It is a very obvious conclusion that these individuals’ impacts are still felt today.

Baroque Opera Through the Ages. (2020, Jun 01). Retrieved from http://studymoose.com/baroque-opera-ages-new-essay 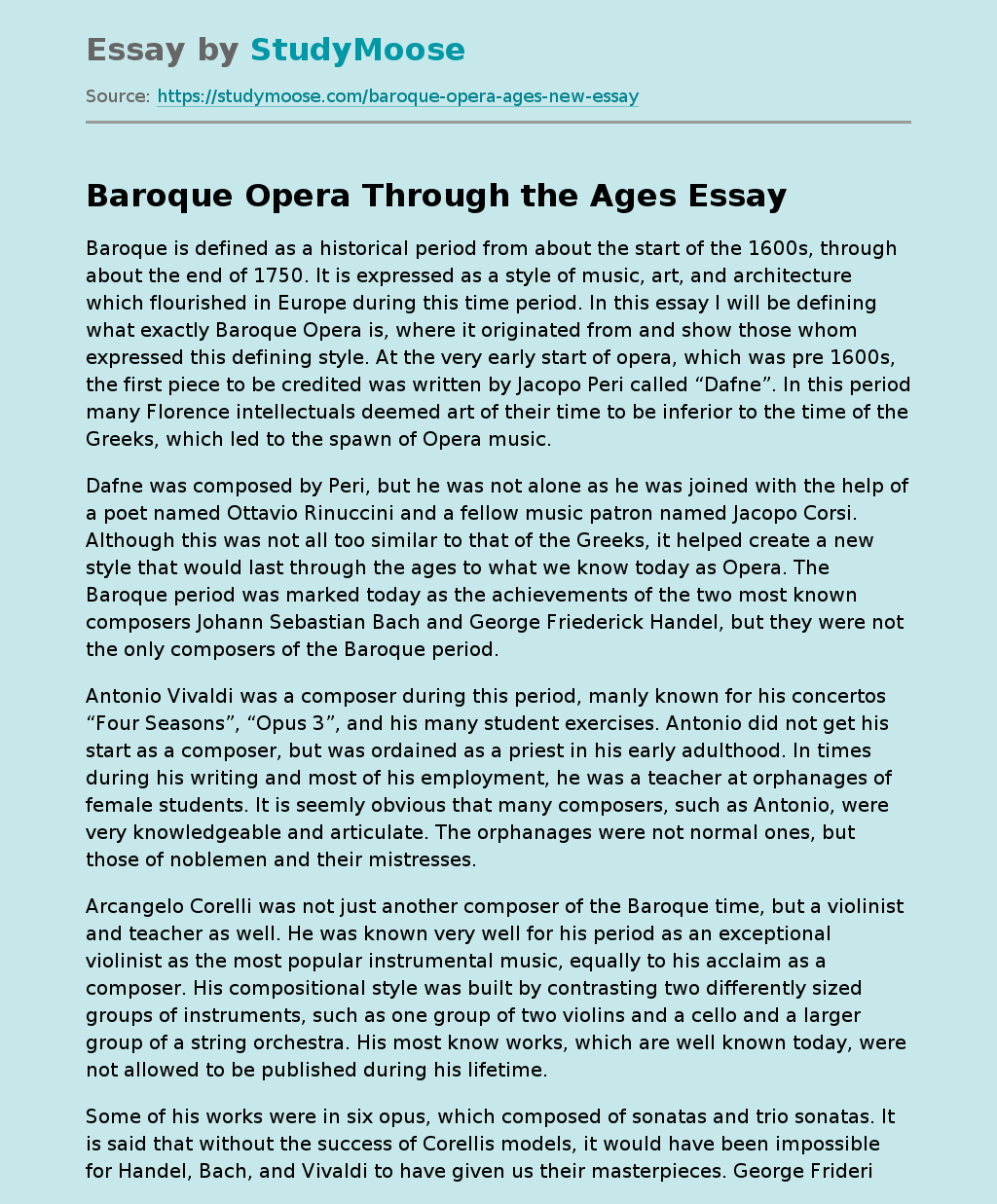