The Influence of Art in Fashion

Fashion is a state of mind. A spirit, an extension of one’s self. Fashion talks, it can be an understated whisper, a high-energy scream or an all knowing wink and a smile. Principally fashion is about being comfortable with what you are, translating self-esteem into a personal style. Furthermore, art and design were more directly tied at the turn of the twentieth century than they are these days. Artists did not see the dissimilarity among creating an original work of art, such as a painting, and designing a textile pattern that would be reproduced numerous times over.

Don't use plagiarized sources. Get your custom essay on
“ The Influence of Art in Fashion ”
Get custom paper
NEW! smart matching with writer

Each was a valid creative act in their eyes.

From earliest times, man has changed his clothing often. A phenomenon known as “fashion” sprang up thousands of years ago. Men and women have tried to wear new things, dissimilar things, clothes that would amaze people or frighten others. To give these people new clothes, other people had to have new ideas, creativity – and so were born the first fashion designer – around 5,000 years ago.

Fashion itself has served as a canvas of purpose for thousands of years. From the delicately gilded armor of crusaders long deceased to the red or blue handkerchiefs that designate gang connection nowadays, fashion has expressed all emotion known to man, yet none so persuasively as conflict. Perhaps the expressions against complacency that are obvious in art are making their way into the world of fashion in preparation for another conflict of sorts, one in which individuals are railing against the societal injustices and political malfeasance of the day.

In the late 1920s, a new modernized design aesthetic dubbed Moderne (now known as Art Deco) combined Cubism’s geometric base with supple embellishments. Once more, textile patterns and fashion design echoed the trend. Shiny fabrics merely enhanced the connection with the “speed” of modern life–and art. The dresses, coats, bathing suits, and evening wraps found in the Tirocchi shop, when placed chronologically, chart for the observer not only the changing silhouette of fashion, nevertheless reflect the fact that fashion was part of an aesthetic that was part and parcel of its time.

From the chemise and cloche of the 1920s, echoing Cubist concerns, to the evening dresses of the 1930s, with the body-skimming silhouettes and reflective surfaces, each garment has a particular relationship to the art of its time. Just as the Italian futurists and artists of the Bauhaus in the early part of this century designed clothes that reflected their artworks, so too did the geometric language of Art Deco and Cubism and the paintings of Picasso, Braque and Mondrian, serve as motivation to designers such as Elsa Schiaparelli who come to the forefront of fashion as the Art Deco style began to vanish.

Furthermore, one example of art that can be seen in fashion was the collection of Judith Leiber, a leader in couture handbags. She has created more than 3,000 different designs since 1963 and every handbag showed art in very artistic way. Art and fashion have constantly shared an intertwining history and complex visual language, even though fashion’s influence transcends the white cube of the art gallery or museum space. The language of fashion, whether in the gallery or on the street, offers telling insights into who we were at the beginning of this century, how it has influenced us at the end of this century, and how will affect us in the one to come.

In addition, fashion refers to the kinds of clothing that are in a pleasing style at a particular time. At special times in history, fashionable dress has taken extremely different forms. In modern times almost everybody follows fashion to some extent. A young woman would look unusual if she wore the clothing that her grandmother had worn when young. Nevertheless, only a small minority of people dress in the clothing that appears in high-fashion magazines or on fashion-show runways.

It is not all the time simple to tell the difference between basic clothing and fashionable clothing. Particularly nowadays, fashion designers frequently use inexpensive and functional items of clothing as inspiration. Blue jeans, for example, originated as functional work clothing for miners and farmers. Yet these days, even people who dress in jeans, T-shirts, and sports clothes might be influenced by fashion. One year, fashionable jeans might have narrow legs; the next year the legs might be baggy. Fashion is art. What ever the designers made is a result of art.

Moreover, fashion is something we deal with each day. Even people who say they don’t care what they wear choose clothes each morning that say a lot about them and how they feel that day. One sure thing in the fashion world is change. We are continually being bombarded with new fashion ideas from music, videos, books, and television. Movies as well have a big impact on what people wear. Ray-Ban sold more sunglasses after the movie Men in Black. Occasionally a trend is world-wide. Back in the 1950s, teenagers everywhere dressed like Elvis Presley.

Fashion is a way of self-expression that allows people to try on numerous roles in life. Whether you prefer hip-hop or Chanel-chic, fashion accommodate the chameleon in all of us. It’s a means of celebrating the diversity and variety of the world in which we live. Fashion is about change which is essential to keep life interesting. It’s as well a mirror of sorts on society. It’s a method of measuring a mood that can be helpful in numerous aspects, culturally, socially even psychologically. At the same time, fashion shouldn’t be taken too seriously or you lose the fun of it.

25 most influential people in fashion, Retrieved on March 12, 2007 at http://www.time.com/time/europe/fashion/0902/influentials.html

Fashion, Retrieved on March 12, 2007 at http://en.wikipedia.org/wiki/Fashion

Fashion: A Presentation on Contemporary concepts of Art and Expression, http://www.students.sbc.edu/hart06/Fashion%20Presentation%20copy/Fashion.htm

Judith Leiber, Art in hand: Retrieved on March 12, 2007 at http://www.phxart.org/exhibitions/leiber.asp

The Influence of Art in Fashion. (2017, Mar 31). Retrieved from https://studymoose.com/the-influence-of-art-in-fashion-essay 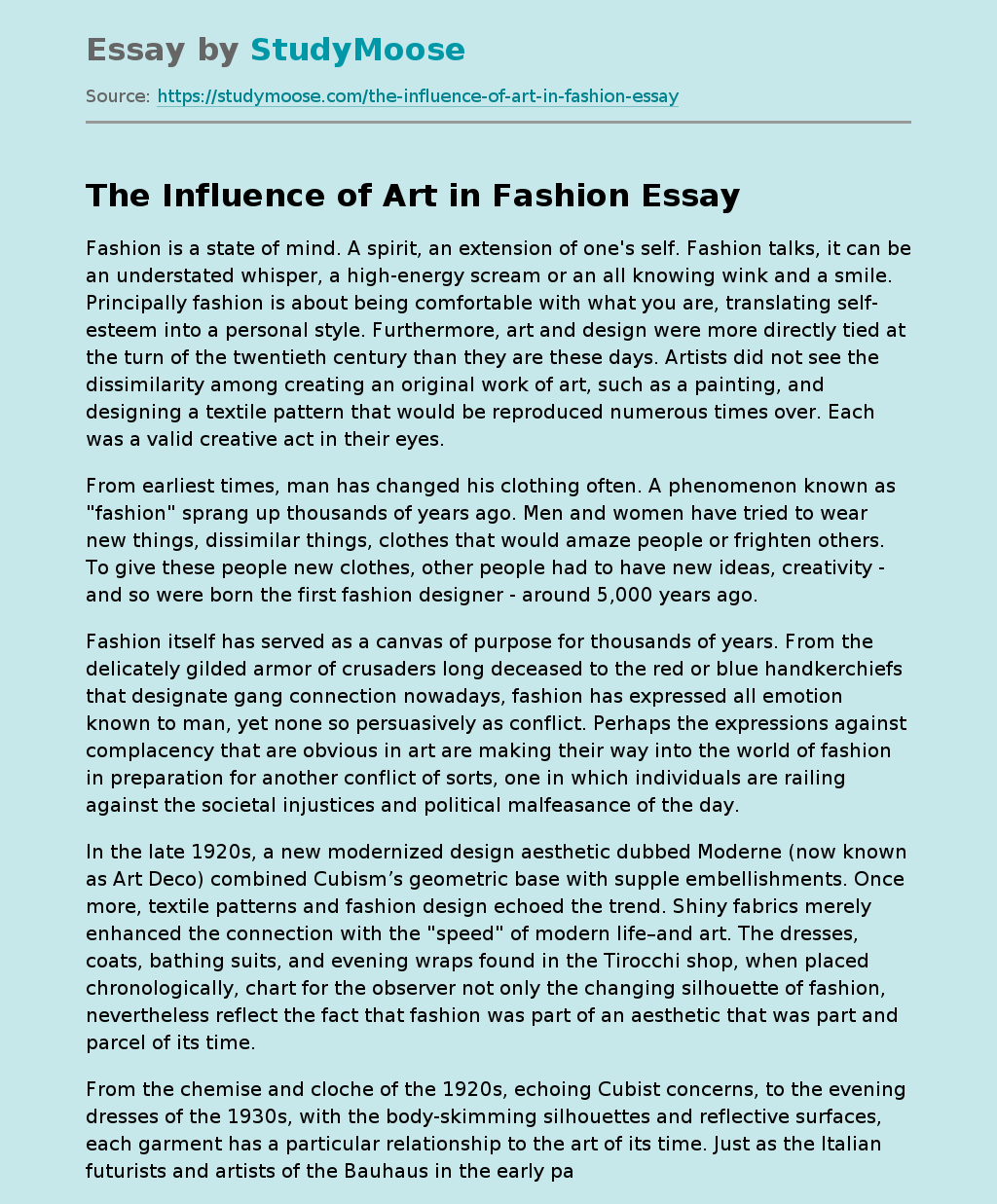