The influence of Chinese civilization and statehood on the neighboring countries and nations was very notable. In particular, it stimulated the acceleration of the social, economic and, especially, political development of China’s close neighbors throughout its history, including Japan. It is not just about borrowing a foreign, even a higher, culture, although this played a role. This refers to something else: the proximity of a highly developed civilization inevitably exerted its influence both directly and indirectly.

This influence played a particularly important role precisely in those periods of the history of the country when the basic parameters of the existence of a given society and state were determined.

Don't use plagiarized sources. Get your custom essay on
“ The Influence Of Chinese Culture On Japanese Culture ”
Get custom paper
NEW! smart matching with writer

For Japan, which was in the impact zone of Chinese civilization, the influence of this kind was quite obvious and self-evident. The only question is what role it played in the process of the formation of both countries.

Cultural contacts between China and Japan date back to around 200 A.D. Since the VI century, Japan (that recently entered the era of the formation of civilization) begins to develop extremely fast.

This dynamism was quite unusual for the East. This fast development was large because Japan was using the experience of other countries, mostly China, very actively.

For example, Prince Shōtoku Taishi, a , was a supporter of the Chinese development model. He created the first set of Japanese laws, where the principles of Confucianism and Buddhism were combined. On his initiative, the artisans, monks, and scientists from China began to come to Japan. Young Japanese also went to study in China.

Prince Karu, who came to power after the coup d’état in the middle of the VII century, was even more consistent reformer. His reign was called “The Great Change,” because not only the ruling family was changed, but the whole life of Japanese society as well. It began to transform actively according to the Chinese model.

Of course, the degree of the cultural influences depended on the receptivity at that particular historical juncture. The process of Sinification was so vast and deep that some researchers even deny the Japanese civilization independence, considering it secondary to the Chinese civilization.

However, borrowing by no means deprived Japan of its identity: the elements of Chinese civilization were significantly transformed under the influence of Japanese characteristics. The difference between Chinese and Japanese culture is undoubted.

Japan adopted one more aspect of Chinese culture – the city-planning. There is a remarkable example from the field of architecture: the emperor Kammu moved the capital to Kyoto (then it was the village of Uda) in 794 and rebuilt it according to the exact plan of the Chinese city of Chang’an in the province of Shanxi. Another example is the city of Nara. Several localities around these old capital cities reveal a system of fields and irrigation systems divided into even rectangles. They are based on the ancient Chinese model of city planning. The use of a road system to hasten communication and control rebelling localities is also an important feature of this system of planning.

Largely borrowing the Chinese model, Japan also adopted the idea of strong centralized power. Unfortunately, it was difficult for the young Japanese statehood to put this idea in practice: they did not have time to gain enough strength for it.

Another important aspect of the influence of Chinese culture on Japanese civilization is connected with the language. The hieroglyphic writing came from China to Japan as a result of active cultural ties in IV-V centuries A.D. The Japanese did not have an original written language and recorded their ancient chronicles with a Chinese letter.

Chinese characters were not adapted to the phonetic structure of the Japanese language. It made great difficulties in the writing and reading system, as well as in the understanding of Japanese text. Chinese characters in the Japanese text were read in the Japanese way and often indicated completely different realities than in the Chinese text. That prompted the Japanese to turn to the syllabic alphabet. It has two phonetic varieties – hiragana and katakana; they are united under the general name of kana. It created a unique combination of two systems of writing – hieroglyphics and phonetic.

The creation of written Japanese language proved to be important for political unification under the Japanese Emperor.

The classical Chinese language was spread in the Japanese society in VI-VII centuries. For several centuries, Japanese literature was influenced by Chinese literature. Despite the appearance of Japanese syllabic alphabet, the Chinese court continued to use Chinese, which played a role comparable to the role of Latin in medieval Europe.

One more aspect of cultural influence that is of great importance is connected with religion. The most ancient Japanese polytheistic religion was Shinto (“Shinto” – letters, “the way of the gods”), which is a combination of the cult of nature, primitive animism, the cult of ancestors and faith in magic.

With the penetration of Buddhism into Japan, the original religion of the Japanese, Shinto, coexisted with it, but Buddhism increasingly came to the forefront and soon became the dominant religion. It fostered the formation of an early feudal state in Japan and brought it to the ancient civilization of Asian countries.

One of the most important consequences of the penetration of Buddhism into Japan is the significant role played by the Buddhist clergy in the political life of the country, striving, especially from the VIII century, to occupy the highest governmental posts. This nomination of the clergy was associated with the intensified construction of temples and monasteries, which possessed great armed force and large lands with feudal-dependent peasants. Buddhist church became the support of the feudal system.

Almost simultaneously with Buddhism, Confucian ideology came to Japan from China. The attempts were made to unify both doctrines, but Buddhism pushed back Confucianism, and the revival of the latter refers only to the beginning of the XVII century.

The traditional culture of Japan is largely borrowed from China. Japan was even compared to an inquisitive young man who learned from a wise old man – China. Japan was also called “the daughter of ancient Chinese civilization.” Of course, we can see a lot of similarities in Chinese vs. Japanese culture. At the same time, if comparing, it is easy to notice that a lot of differences exist in Japanese vs. Chinese culture.

The tradition of borrowing was formed during the historical development of Japan and became an important feature of the national culture of the country. It is interesting that the perception of the new did not require a conceptual reorganization of consciousness. It was never the forcible replacement of the old by the new. The borrowed culture assimilated, supplemented the autochthonous Shinto culture of Japan. Chinese cultural influence was assimilated and transformed into something consonant with the autochthonous culture, without the expenditure of energy to destroy the old and build the new.

The Influence Of Chinese Culture On Japanese Culture. (2016, Oct 04). Retrieved from https://studymoose.com/the-influence-of-chinese-culture-on-japanese-culture-essay 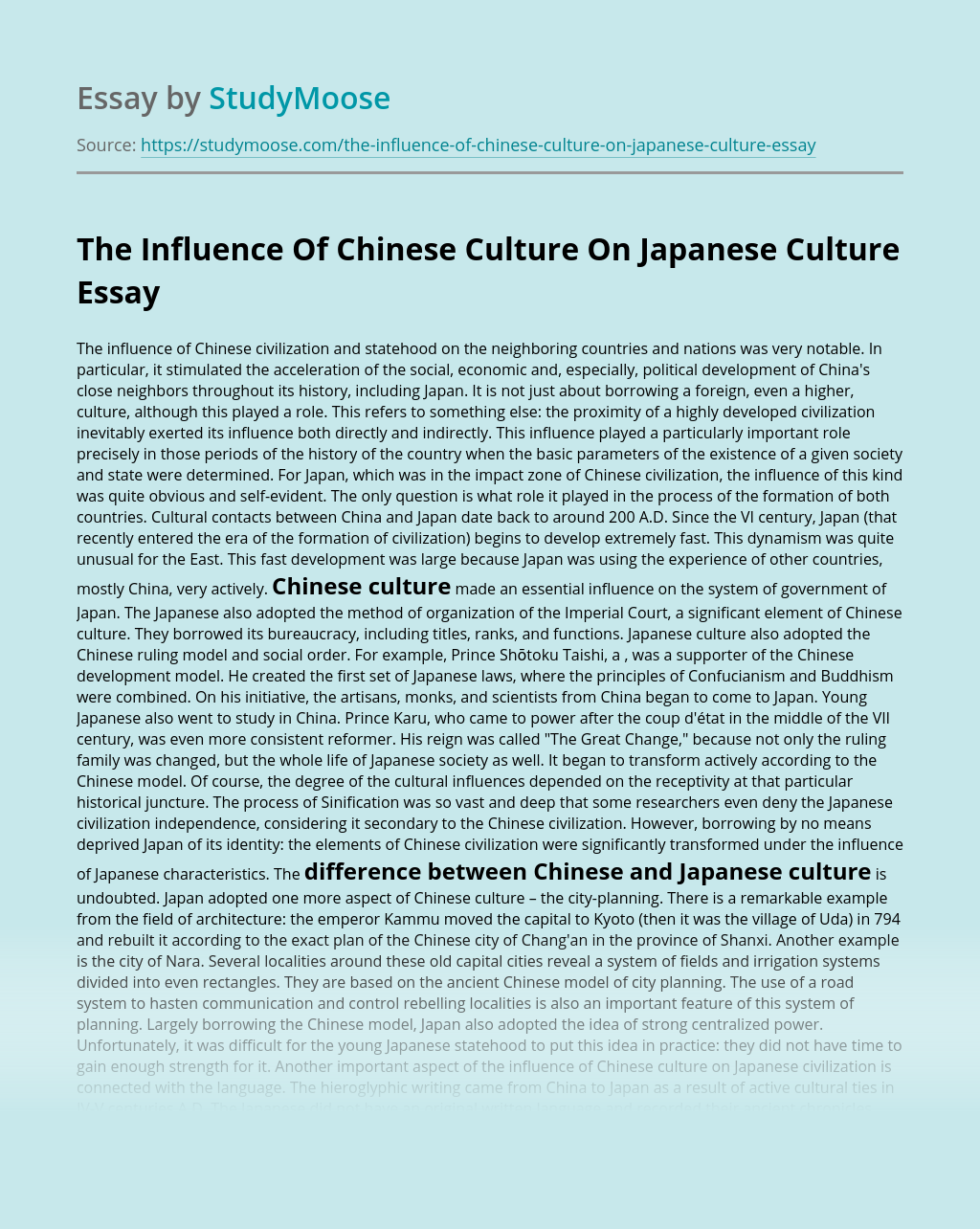