Confucianism, Legalism, and Daoism are the three main philosophies of the Chinese people. They have been the most influential and widely taught philosophies of the Chinese for many centuries. This essay will reveal the history of each philosophy’s origin, and will reveal the main characteristics of each respected area. Confucianism began as the thoughts and ideas of a man named Confucius who lived at around 500 B. C. It is interesting to note this was around the same time Buddha was supposedly alive.

Don't use plagiarized sources. Get your custom essay on
“ Confucianism, Legalism, and Daoism Comparison ”
Get custom paper
NEW! smart matching with writer

Confucian was not a prophet, and had little to say about gods, death, or the afterlife.

He developed instead three concepts of living that formed the basis of his philosophy. First, every person should accept an assigned role in society and perform the duties of that role. Second, the government should be virtuous. Finally, only well-educated and extremely virtuous officials should be appointed to run the government. According to legend, Confucius worked as a minister in his native province of Shandong.

It is said that in a less than a year, almost all crime was gone. However, after this it is said nearby emperors became jealous and forced him to retire.

For the rest of his years he educated people on the ways of his teaching and stirred thought into the minds of many. Daoism was thought to be founded by a man named Laozi that lived around 500 B. C. Daoism can be defined by its root word Dao meaning “Way of Nature”. Laozi viewed Dao as the indescribable force that governed the universe and nature.

Laozi believed that people should not strive for riches or power, but rather should try to bring themselves into harmony with Dao by being peacefully quieted, thoughtful, and humble.

Unlike Confucius, Laozi shunned politics and advised people not to get involved in public affairs. Daoism mainly influenced artists and peasants because artists were encouraged by Dao and began expressing themselves in a better manner. Peasants began to believe in the philosophy because it dealt with nature and its natural forces. Confucianism and Daoism simply filled in what the other lacked in certain areas. Legalism, another form of philosophy, also concerned itself with politics.

The teachings, however, differed greatly then that of Confucianism. Legalists believed in power, not virtue, and in harsh forms pf punishment. Legalists viewed people as selfish and untrustworthy. It was believed that threatening people was the only way to achieve peace and prosperity in society. The emperor Shi Huangdi of the Qin Dynasty followed the Legalist method. The Qin Dynasty became powerful but was short-lived mainly because of its cruel punishment and laws. It was believed that the yin and yang was not balanced enough during this time.

Overall, I think all three of these philosophies are well developed and each has their good and bad. For this reason, many people understandably combined more than one of the three philosophies in an attempt to even out their lifestyle. All three are worthy philosophies and each deserves a certain amount of respect. I believe that because of the great principles each is built on, and the flexibility within each sector, the three philosophies will live in for a very long time and will be passed on from generation to generation forever. 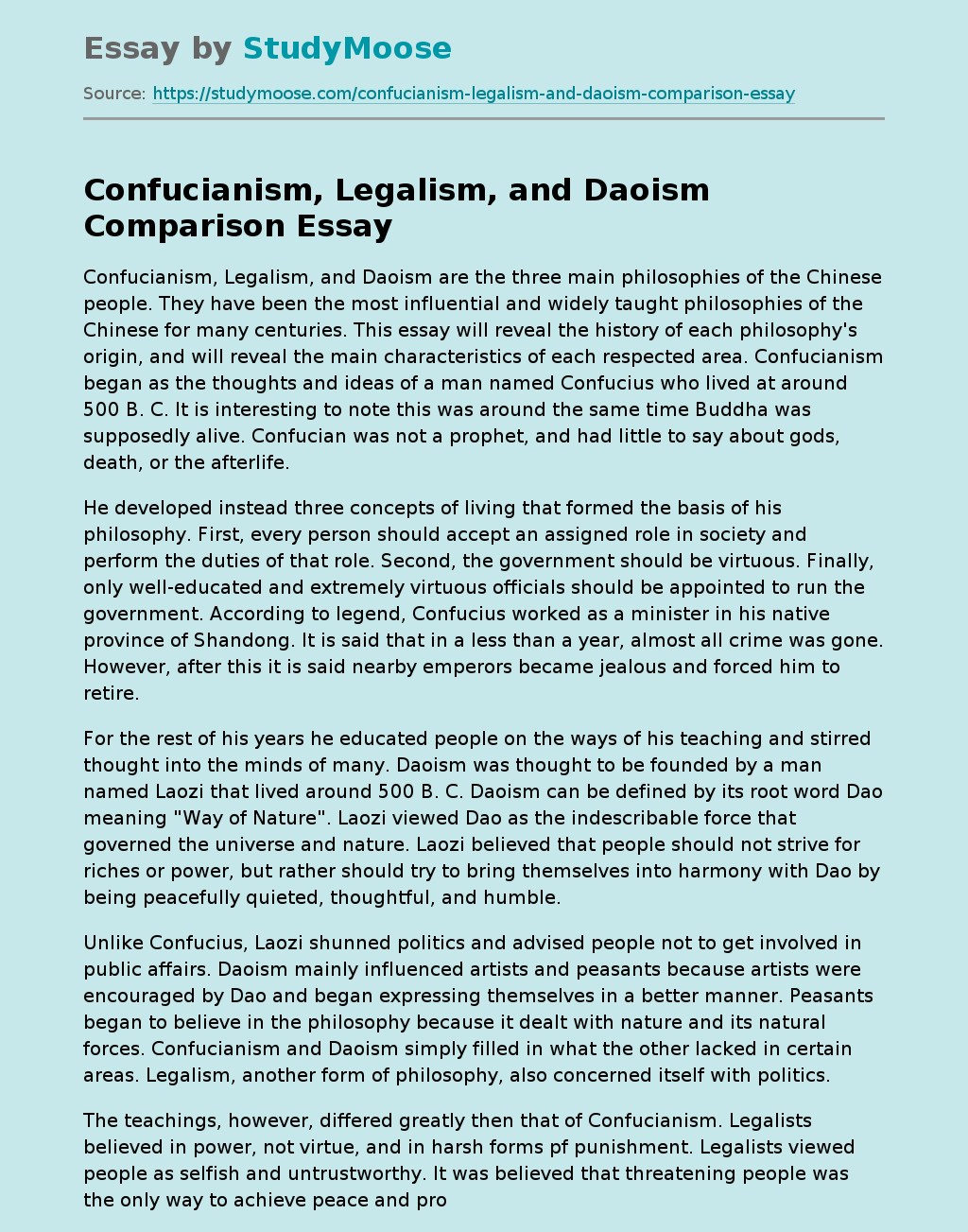