Even though he died in 479 B. C, Confucianism became one of the most influential thought systems of Chinese history through a small handful of devoted followers because they continued his legacy. These followers had to derive their own interpretations of his system that formulated what is now known as the Analects. Both Confucianism and Daoism disfavored harsh government. Both also accepted the presence of a supernatural entity without providing a clear explanation on it. Confucianism and Daoism (Taoism) both focus on the goal of self improvement.

Turn in your highest-quality paper
Get a qualified writer to help you with
“ Comparing Confucianism and Daoism ”
Get high-quality paper
NEW! AI matching with writer

Taoism was more focused on improving the individual’s relationship with himself, creaing an inner harmony. On the other hand, Confucianism focused on the “social, earthly orientation” of everyday life. In the East, many people unite elements of each of these philosophies in their daily lives. They have a strong belief that together, the two philosophies can work together in harmony.

Involved in Confucianism is also a superior man. This man is one who has trained himself to follow the societal expectations imposed upon him.

The two philosophies/religions originated in the 5th/6th centuries in China.

Taoism though, shows roots in some of China’s oldest belief systems where shamanism and pantheism were prevailing. While they both have elements of philosophy and religion, Confucianism and Taoism at first seem to be polar opposites of each other. They appear to represent different methods of thinking about the world around us and to impose separate codes of behavior. However, many people (especially in the East) incorporate elements of both philosophies in their daily lives and believe strongly that the two can and do work together in harmony.

One of the greatest areas where Confucianism and Taoism differ is in their primary focus. Confucianism focuses on the social, earthly orientation of everyday life. According to Confucius, humans are primarily social beings with a natural capability for goodness – which, if followed, leads to social harmony. In Confucianism a “superior man” is one who has trained himself to do what society expects of him. On the other hand, Taoism places much more focus on the relationship of the individual with himself, on achieving an inner harmony.

Taoism is much less earthly in nature and places importance on “coming into harmony” with the Tao – the ultimate reality that formed the universe and everything around us. To simplify, while they both dwell on the improvement of the individual, Confucianism looks outward to accomplish this, while Taoism looks inward. Another area where the two philosophies differ is in how they are passed on and taught. While both philosophies revolve around the wisdom of a single teacher or master, they are presented in very different ways.

Confucianism has a dialogic tradition – that is, lessons and teaching are presented as a dialog between the master (Confucius) and his student(s). In fact, most of the Confucian texts are simply that – recordings of question and answer sessions between master and student, each with a distinct lesson to impart. Taoism relies mostly on the direct writings of Lao Tzu, its founder. The “Tao Te Ching”, Taoism’s main text, is a series of monologues (in poem form) that are meant to be taken as a whole.

One thing that Confucianism and Taoism have in common is that both philosophies focus on the goal of self-improvement. In Confucianism, the individual improves himself through orderly adherence with codes of behavior and respect for elders, and the reward is achieved strictly in this life. In Taoism, the individual improves himself through contemplation of himself and universal energy, and the reward (while also in this life) is mainly in the next life (i. e. , through reincarnation). However, in both philosophies, the end result of this self-improvement is an improved social order that benefits all.

While no-one would deny that Confucianism and Taoism have strong contrasts, their similar goals have allowed them to co-exist successfully for thousands of years in many cultures of the world. In fact, many believe that without incorporating elements of both philosophies, an individual cannot be truly whole. Taoism is more accurately referred to as a philosophy than a religion, and is commonly grouped in with Buddhism and Zoroastrianism by books on world religion. Taoism’s origin shows roots in the oldest Chinese belief systems, back to a time when shamanism and pantheism prevailed. 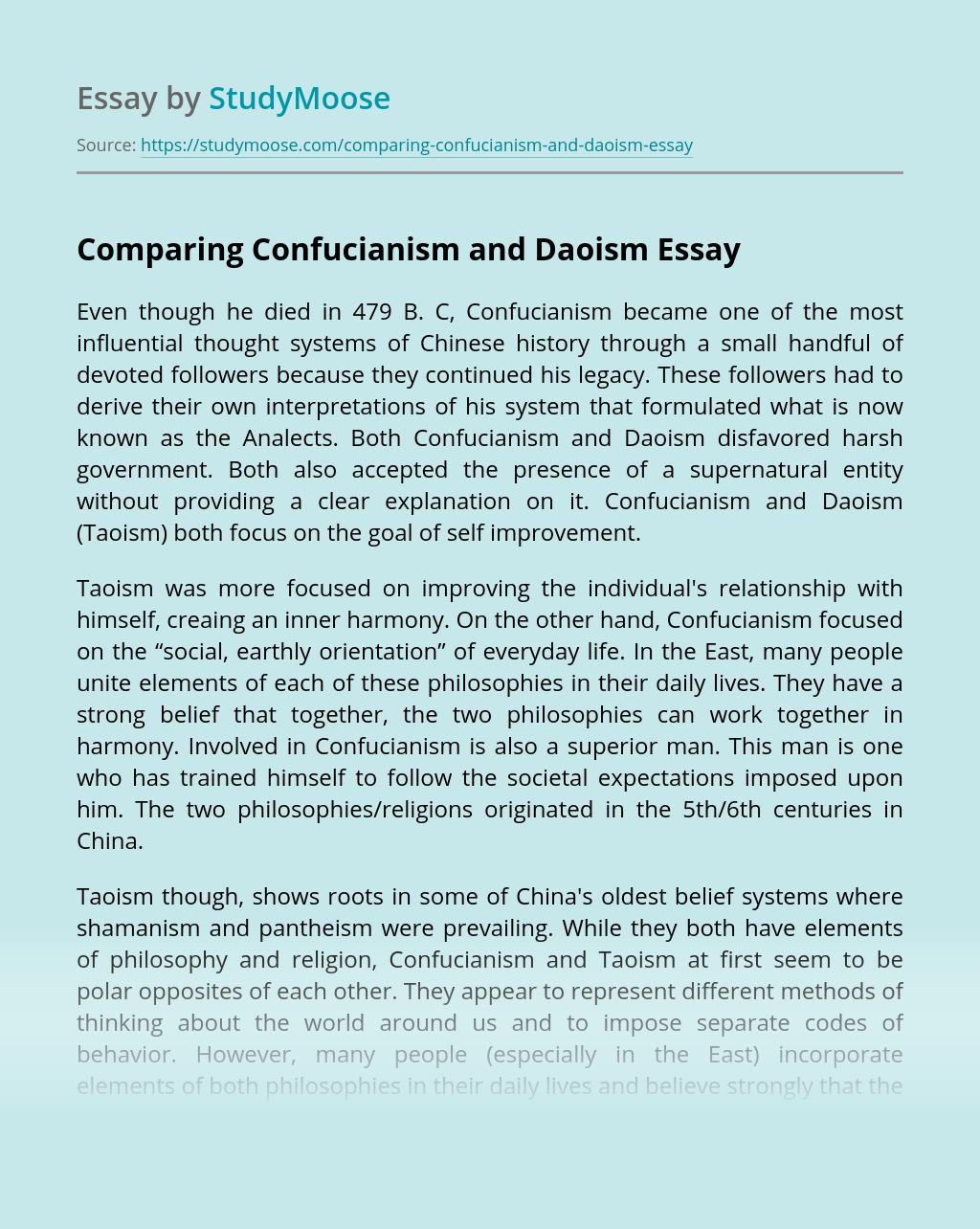 Turn in your highest-quality paper
Get a qualified writer to help you with
“ Comparing Confucianism and Daoism ”
Get high-quality paper
Helping students since 2015
Stay Safe, Stay Original