These elements contribute to the short story’s effectiveness as author uses different literary forms and styles to connect the reader to the story. Style has many characteristics that help the author engage the reader such as; punctuation, the use of connotations, and culture. This is what helps the reader’s imagination take over, paint the picture, and get emotionally connected to the author’s story.

In comparing and contrasting the two short stories of “the Secret Life of Walter Mitty” by James Thurber and “Country Lovers” by Nadine Gordimer you see the differences and similarities in style between the two authors.

Don't use plagiarized sources. Get your custom essay on
“ Comparing and Contrasting Country Lovers and The Secret Life of Walter Mitty ”
Get custom paper
NEW! smart matching with writer

The culture, which is the common characteristics of a group or a region (Clugston 2010), is very similar in both stories since they are close to real life with the setting in the 1900’s. Both stories revolve around relationships and love. Thurber style is more imaginative then Gordimer which is defined by his use of connotations and punctuation, although both stories are very detailed when it comes to the characters and settings within the stories.

In the short story “Country Lovers” Gordimer does a great job illustrating the setting, which is the time or place in which the action occurs (Clugston 2010). Gordimer provides details about the South African culture that allow the reader to understand the separatism and segregation the characters are living. The reader gets to feel what it’s like to be black in South Africa through the detailed descriptions of the loving conditions and treatment of blacks.

The main characters in the story are Paulus and Thebedi. Paulus is the son of a farmer who was raised with the children of the black families that worked on his father’s farm. He falls in love with a black childhood playmate as a teenager but he understands that a relationship with her is forbidden. Thebedi is Paulus black childhood playmate who becomes his lover. The two begin a sexual relationship which results in a child being born. The theme, which is a representation of the idea behind the story (Clugston 2010), is interracial love or forbidden love. The laws and culture of South Africa forbid interracial couples. Thebedi & Paulus are aware of the dangers of being together but choose to get involved anyway.

As the story unfolds, Gordimer brings out the imagination of the reader through the use of metaphors, which is an implied comparison between one object and another that is different from it (Clugston 2010). An example of this is when Goridmer writes, “hidden by the mesh of old, ant–eaten trees held in place by vigorous ones, wild asparagus bushing up between the trunks, and here and there prickly–pear cactus sunken–skinned and bristly, like an old man’s face” (Clugston 2010). This allows the reader to visually paint the picture of where Thebedi and Paulus are at and what the scenery is. A common symbolism, which is something that has a literal identity but also stands for something else (Clugston 2010), that is used in “Country Lovers” is a tree. A tree can be a symbol for life, death, or immortality. This is a good match with the theme and plot of the story.

The plot, which is a dynamic element in fiction, a sequence of interrelated, conflicting actions and events that typically build to a climax and bring about a resolution (Clugston 2010), thickens as both Thebedi and Paulus continue their love affair. Thebedi goes on to marry Njabulo, who is also black, and fails to tell Paulus of her marriage. At the same time Thebedi also finds out she is pregnant with Paulus baby. When Thebedi gives birth to her daughter it’s obvious the baby isn’t Njabulo’s but he accepts her as it was his own. When Paulus finds out about the marriage and the child he becomes upset, why does he get upset, I believe it’s a sign of his love for Thebedi which ties back to the theme of forbidden love. The story takes an interesting twist, although the author never clearly states that Paulus killed the baby, it’s evident he did by the flow of the story. It’s up to the reader to understand the “why”, why would Paulus kill the baby? Again, I believe the “why” ties back to the theme of forbidden love.

Paulus has accepted that Thebedi will never be his wife due to society and the racial customs of South Africa. Understanding this he doesn’t want anyone to find out about the baby because interracial relationships are forbidden so he takes the extreme measure of killing the baby. One could also argue that he killed the baby out of jealousy and not wanting another man to raise his child. The story ends with Thebedi refusing to testify against Paulus in the killing of her baby. This shows that Thebedi has accepted her role in society as a black woman giving up any hope if a relationship with Paulus. Throughout the whole story Thebedi character is submissive to Paulus but the ending shows that Thebedi is also submissive to society by giving into social traditions and discriminatory behavior of South Africa.

The short story of “The Secret Life of Walter Mitty” by James Thurber is written in a third person point of view, which occurs when the speaker is not a participant in the story (Clugston 2010). The form is limited omniscient, which is when the thoughts and feelings of only one of the characters are related through the narrator (Clugston 2010) that character is Walter Mitty. The setting of this story occurs in a city called Waterbury but the state is never mentioned or disclosed, one can assume its Waterbury, Connecticut. The main characters are Walter Mitty and Mrs. Mitty. Walter Mitty is someone who gets bossed around by his wife so he creates a secret life for himself. In his secret life he see’s himself as a powerful man who is admired by all, something he is not in real life. Mrs. Mitty is the bossy, nagging, overbearing wife of Walter Mitty. Thurber does a great job illustrating the relationship between Walter and his wife which many people can relate too, I found it very humorous. That takes me to the theme of the story, which I believe is marriage. Thurber portrays a marriage where the husband is submissive to his bossy, nagging, and overbearing wife. A second theme could be masculinity since all of Walter’s dreams portray him as a powerful man who’s admired by all.

The story is about Walter taking his wife into town to visit her hair dresser. Along the way Walter begins to fantasize to escape the reality of his real like. Thurber does an excellent job of engaging the reader’s imagination through each of Walter’s fantasy’s allowing the reader to vividly picture what Walter is fantasizing about. An example of this is during Walter’s first fantasies where he is commanding a hydroplane through a storm, “Rev her up to 8500! We’re going through!” The pounding of the cylinders increased: ta-pocketa-pocketa-pocketa-pocketa-pocketa” (Clugston 2010). The sound of “ta-packeta-pocketa” is just the cylinders of the car Walter is driving. Each one of Walter’s fantasies is tied to something that is specific to what’s going on in the story. As Walter drives past the hospital he starts to fantasize about being a surgeon. As the newsboy shouts about the Waterbury trial Walters fantasizes about being in a courtroom. The Liberty magazine leads Walter into a fantasy about military dugout. Thurber does a great job of interweaving Walter’s fantasies with the surroundings of the story.

The uses of symbolisms in “The Secret Life of Walter Mitty” were not used in the traditional literary forms. Instead Thurber ties in the symbolism of control and power in each of Walter’s fantasies by Walter showing bravery, no fear, power, fame, and a man with high ranking titles. Thurber does a great job of connecting and supporting the symbolism with the theme of marriage and masculinity. The use of this symbolism is to show how Walter feels about marriage, since Walter feels powerless throughout the story as his wife talks down to him.

There are many differences and similarities in “Country Lovers” and “The Secret Life of Walter Mitty”. The first and most recognizable difference is “Country Lovers” is a tragic story with a plot that builds up along with way with romance, physical relationship, racial discrimination, pregnancy, arranged marriage, murder, deception, secrecy, and acceptance of normalcy. While “The Secret Life of Walter Mitty” is a comedy with not much of a plot. Where they are similar, both are written in a third person limited omniscient point of view. Both had themes of love and marriage but were very different in how each played out. “Country Lovers” was forbidden love and arranged marriage while “The Secret Life of Walter Mitty” was love and marriage between a husband and wife. These literary elements contribute to the short story’s effectiveness as author’s uses different literary forms and styles to connect the reader to the story.

Comparing and Contrasting Country Lovers and The Secret Life of Walter Mitty. (2016, Mar 06). Retrieved from https://studymoose.com/comparing-and-contrasting-country-lovers-and-the-secret-life-of-walter-mitty-essay 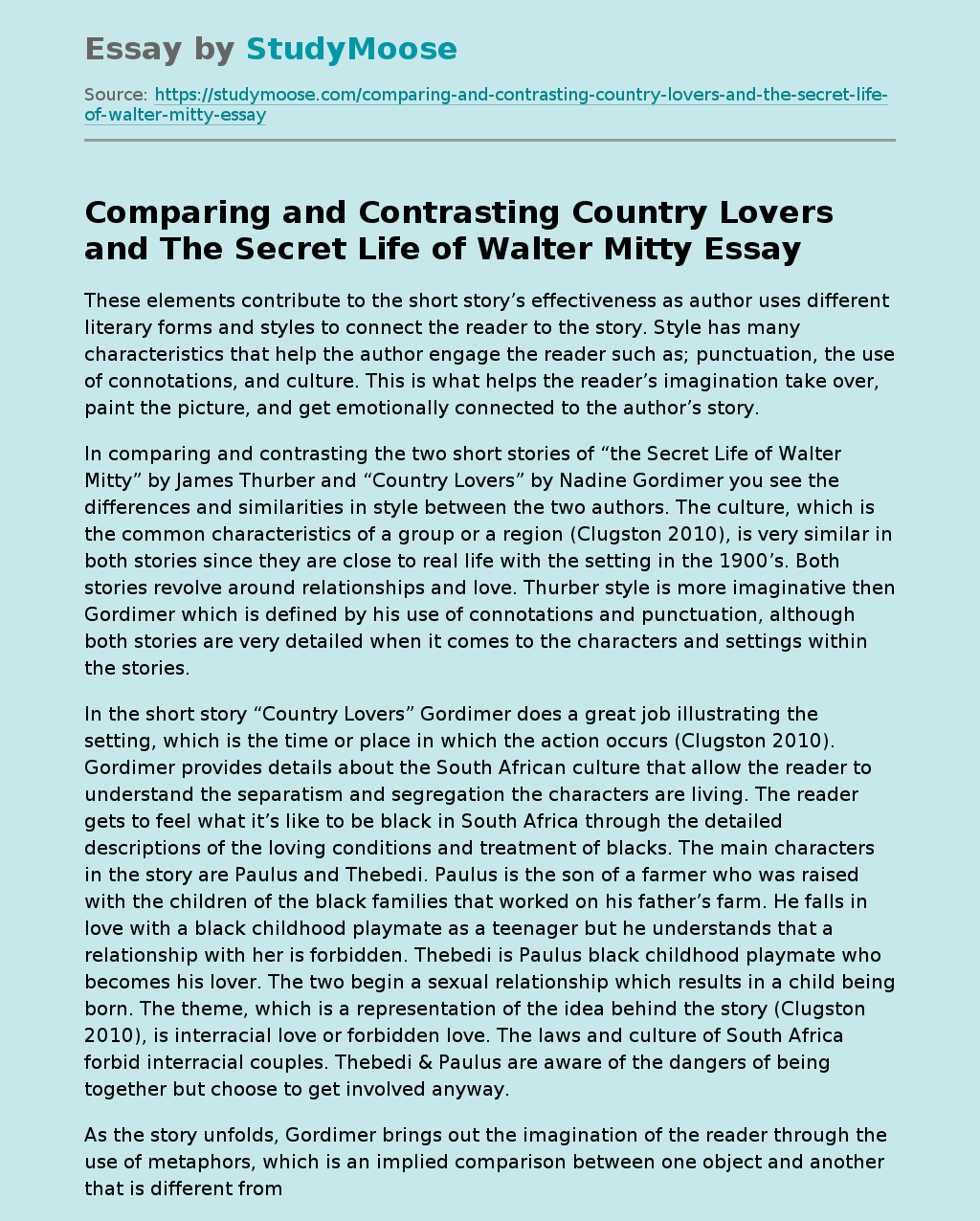