The Secret Life of Walter Mitty” by James Thruber

James Thurber is one of the best known humorists in America, and the work “The Secret Life of Walter Mitty” is considered to be one of the Thurber’s “acknowledged masterpieces”. The story was published in 1939 in the New Yorker magazine to great applause, and was first collected in his book “My World and Welcome to It”. In 1947, Hollywood released a movie of the same title, starring Danny Kaye and Virginia Mayo.

The name of the main character Walter Mitty and the derivative word “Mittyesque” have entered the English language, describing an intellectual person, who spends more time in heroic day dreams than paying attention to the real world, or more seriously, one who deliberately tries to trick or persuade others that he is something that he is not.

Don't use plagiarized sources. Get your custom essay on
“ The Secret Life of Walter Mitty” by James Thruber ”
Get custom paper
NEW! smart matching with writer

In military circles, this usually refers to people who try and fake a successful career. The idea for Walter Mitty was got from a book “Malice Aforethought” by a leading British crime-fiction writer Antony Berkeley Cox.

Proficient in: The Secret Life of Walter Mitty

Here the main character is named Dr. Bickleigh, who runs away from unbearable reality into fantasies markedly similar in character to those of Mitty. Nevertheless, Walter Mitty is very much a Thurber protagonist, so much so that he has been called “the archetype for dreamy, hapless, Thurber Man”. Like many of his physically unimpressive male characters Thurber often paired with larger woman in his cartoons, Walter Mitty is dominated and put upon by his wife. Like a man who saw the unicorn, he escapes by way of fantasies.

The title itself describes what this story is all about.

Walter’s negative manner of speaking of himself makes the reader realize that he is not very happy in his life. He is an ordinary man, who first dreams about being a commander of a hydroplane who should get his crew out of danger from the hurricane. This short story is about a man, Walter Mitty, and his wife who make a trip to town, Waterbury, to run instructions. Mrs. Mitty needs to stop at the hair salon and she commands her husband to leave the car at the mechanic and go to the store to buy overshoes and some unknown objects that he couldn’t recollect.

Throughout the trip to town the old man is lost in day dreams, where he is heroic at the end. These fantasies are the secret life of Walter Mitty. The real-life setting in this story is rather mundane: a hairdresser, a parking lot, a hotel lobby, a drugstore – all everyday elements of every town or city. The dimness or banality of these locations reflects the dullness of Mitty’s everyday life. This is pretty contrasted with the environment of Walter’s fantasies: a “Navy hydroplane” in a storm, an operating room, a courtroom, a dugout, a wall before a firing squad.

These locations are tense, gripping, and out of the ordinary. The main character is a middle-aged, middle-class man, flees from the routine drudgery of his suburban life into fantasies of heroic conquest. In the story Walter Mitty proves that he is a very forgetful and a really stubborn man with a vivid imagination. He is constantly being distracted, and starts to dream often. His daydreams all has him as a successful, brave, heroic person, who is called in to save the day. Walter imagines himself the hero of his fantasies as a navy pilot commander, doctor, sharpshooter, bomber pilot, and noble victim of firing squad.

His daydreams changes throughout the story. In his final vision, he sees himself facing a firing squad. It is another expression of his exceptional courage and bravery. Reading the story the reader understands that these dreams mean something more, the old man Mitty feels that he can be a lot more than what he is in his everyday life. The catching is the way Thurber introduces the changes of events Mr. Mitty is imaging. The story begins with him in one of his fantasies as a daring Navy pilot and then his wife cuts in saying “Not so fast! You are driving too fast! ”.

Walter was going so fast, because he was caught up in his imagination of being a naval pilot, he did not pay attention to how he was going. This was one of his many dreams. He imagines all these stories because he wants to make his life interesting. And his wife doesn’t seem to support him, she is always nagging. Mitty’s wife treats him more like a child than a husband. She only sticks to her guns and doesn’t let anything get by her. Thurber writes his story around Mitty’s daydreams and his return to reality. This novel seems to be the bunch of stories put together in one.

In a Walter Mitty’s second daydream he is a “know-it-all” doctor, who fulfils a very difficult operation, on a millionaire banker. He seems to be brave saying “I could have killed Gregory Fitzhurst at 300 feet with my left hand”. In the real life he isn’t the one to perform an important operation; he is merely an occasional bystander of the hospital. Mitty has no courage, and has no charisma and would never participate in such a daring act in reality. The next dream depicts Walter as a commander of a bomber in the military, resolving to fly it to the other troops to drop off more ammunition.

He isn’t putting up a flight or wearing a handkerchief over his eyes, he is behaving like a man. And again his imagination is interrupted. Walter’s last dream finds him in front of a firing squad, very quiet, getting ready to be executed. The old man is actually just a observer of the Waterbury trial, wishing that he was an accused. Mitty hits the District Attorney, who tries to wake a beautiful woman up from devastation. Here Walter Mitty is urbane and triumphant too. Once again the creative mind of the man has him doing something totally out of his league. Life places a great gap between wish and reality.

This is true for Walter Mitty, the main character in the story “The Secret Life of Walter Mitty”. This man is far from being a respected man with a good career and his wife looks him down upon him. So he fabricates his own perception of reality, his daydreams, where he, Walter Mitty, is a hero and a leader. The way Mitty is in reality really contrasts the way he is in a fantasy world. His incapacities in the real world quickly turn into abilities in “fantasy land”. The man avoids weakness and does not let any pessimistic views ruin the complete spirit of his ideas.

Every time the main hero has a daydream, he seems more and more unwilling to live in the real life. Why should anyone live in reality when you could live in a fantasy like that? Although Thurber’s humorous stories, essays and illustrations were popular during his lifetime, the author has received little scholarly attention. Some literary critics rejected his works as little more than pattern and whimsical. Lately critics have become attentive to James Thurber’s literary mastery, such as his use of wordplay and attention to narrative form. The scholars have also debated the darker themes of his work which hide beneath the merriment.

Others, referring to his tendency to depict domineering women, like Mrs. Mitty, and ill-fated men, like Walter, blame his treatment of women and views of marriage. In common with Charles Dickens’ Scrooge and George Orwell’s Big Brother, Walter Mitty has outgrown his literary roots to become an everyday metaphor for a certain type of character or behavior. This type of character had an influence on other humorists, notably Mad founder Harvey Kurtzman, playwright George Axelrod (who employed Mitty-like fantasies in The Seven Year Itch) and animation director Chuck Jones (who created a Mitty-like child character for Warner Bros.cartoons).

The Secret Life of Walter Mitty” by James Thruber. (2017, Feb 03). Retrieved from https://studymoose.com/the-secret-life-of-walter-mitty-by-james-thruber-essay 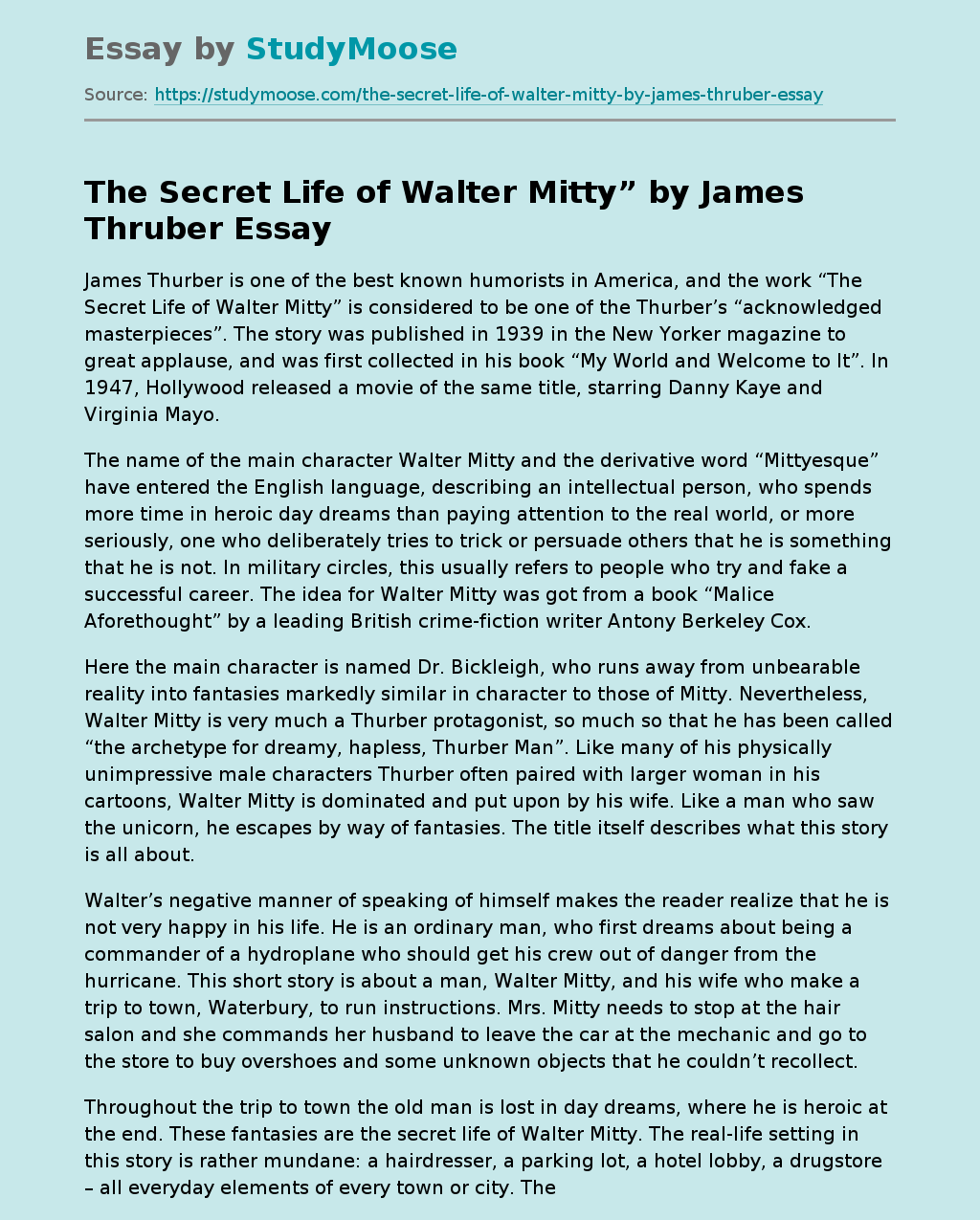