The story “The Secret Life of Walter Mitty” is a form of a short story genre variety. This story was written by James Thurber, and published in The New Yorker in 1939 (Clugston, 2010). This is an intriguing story of a daydreaming husband, Walter Mitty, and his domineering wife as they run a few errands to town. I will make use of literary criticism by explaining my connection to the story, analyzing the meaning of the story, and taking the formalistic approach in discussing James Thurber’s story.

Don't use plagiarized sources. Get your custom essay on
“ The Secret Life of Walter Mitty Literary Analysis ”
Get custom paper
NEW! smart matching with writer

My connection to this story is strongly held by the fact that I am also a daydreamer. I will admit this is a frustrating characteristic for others, but for one’s self as well; eventhough, the situations discussed in the story seem quite humorous to the reader. Mr. Thurber presents the tone, or mood, of frustration throughout this story. As Walter is daydreaming and driving faster than Mrs. Mitty likes, she abruptly interrupts him. Although the daydream breaks for an instance, he quickly returns to his daydream.

Mrs. Mitty is quick to interrupt again, “It’s one of your days. I wish you’d let Dr. Renshaw look you over.” Her frustration is evident because she thinks that something must be wrong with him. Later when Walter is not wearing his gloves, Mrs. Mitty is certain he has lost them. James Thurber has reinforced her frustration.

Walter’s frustration is expressed in the story several times as well. An instance when a parking attendant awakens Walter from another daydream, the story reads “Mitty becomes a little testy.

” When Walter makes several mistakes trying to park the car, the frustrated attendant tells him to “leave her sit there, I’ll put her away.” When the attendant parks the car with some expertise, Walter replies “they’re so damn cocky, they think they know everything.” Probably the sharpest image portrayed in the story is when Mrs. Mitty is hassling Walter for not having the sense to put on his overshoes. Walter’s reaction is one of self-defense stating “Does it ever occur to you that I am sometimes thinking.” This set the tone that Walter is letting his wife know that just because he may seem lost, does not make him senseless, or that she needs to keep after him the way she does. As a daydreamer myself, I have experienced some of the same frustrations depicted in this story, so I connected with the story immediately.

Now moving on to the analysis of this story, there are several meanings illustrated. According to Koger, there are four themes or meanings conveyed through this story which are “the contrast between a human being’s hopes for life and its actuality, the power of the mind or imagination, the conflict between the individual and authority, and the ascendancy of technology and materialism in the twentieth century” (Koger, 2004). I agree that all of these themes are displayed throughout the story; however, I believe one has been overlooked. I feel that Walter Mitty may have self-esteem issues that he is able to overcome in his daydreams or, even better, they do not exist.

Many examples are apparent contrasting one’s hopes and reality. Walter’s “heroic ability” in his daydreams versus his inadequacies in the reality of the story is one example (Koger, 2004). Another fine example is Mitty’s ability to master technology in his daydreams versus his inability to maneuver his car, or appropriately unwind tire chains (Koger, 2004). Another example, of my own accord, is the confidence that is portrayed in the fantasies that do not exist in the reality. For example, in the first daydream he is a commander taking charge of a ship and traveling through a storm versus being told to wait in front of the drug store, in the rain, for his wife as though he were a child.

The power of the mind and imagination another theme to the story is exemplified through Mitty’s daydreams. Mitty is able to overcome every dilemma he faces in reality through his daydreams. He becomes an expert of machinery, and he no longer fears authority figures, but instead becomes an authority figure. He even boosts his self-esteem by allowing the phrase “the old man ain’t afraid of hell.”

Self-esteem is an important characteristic of the story. The persona or narrator may or may not reflect the author’s perspective (Clugston, 2010). However; Thurber lost an eye as a child (Clugston, 2010). I find it very symbolic that in Walter Mitty’s first daydream; the narrator describes the commander “with the heavily braided white cap pulled down rakishly over one cold gray eye.” I am inclined to think that James Thurber may be the Walter Mitty in the story. That being said, I also understand where the lack of confidence has played into the story. Mr. Thurber is able to cover his bad eye through the words that he writes. Thompson describes Mitty as a “docile nobody muffled in layers of winter clothing with a loquacious and overprotective wife beside him” (Thompson, 2008). This is yet more evidence of the poor self-esteem portrayed characteristically through Walter Mitty.

The formalistic approach is “the most widely used in literary criticism; it focuses on the form and development of the literary work itself” (Clugston, 2010). The setting of the story is memorable because it is cold, and the characters must drive into town to run errands giving clues that the Mitty’s live in the country or a very small town. James Thurber also creatively interrupts the daydreams at their climax, adding to the jolt back to reality. This gives the readers a chance to get lost in the daydreams, and be jolted back to reality as well. Walter is described as a middle aged man unhappy with his life. The evidence of his unhappiness is portrayed through his daydreams where his life is almost perfect.

Mrs. Mitty is described as a nagging old woman who is constantly frustrated with her husband’s absentmindedness. She is constantly telling him what to do and how to act. When he does not, she assumes he has fallen ill. Thurber also uses the same simple phrases such as “pocketa-pocketa-pocketa” for every machine giving the reader the sense that in reality, all machines have the same amount of value in Walter’s mind. Using the simple fountain pen to fix an expensive piece of machinery also gives clues to Walters’s lack of intelligence when it comes to technology. The author also uses very explicit daydreams allowing the reader to understand how far Walter Mitty had escaped from reality.

In conclusion, I have discussed my connection, analyzed the meaning, and taken a formalistic approach to critic this wonderful piece of literature. The connection to the story is easy to come by as every person daydreams occasionally. The story consists of five different meanings or themes as I have discussed. I have also discussed the several different literary actions and the artistic ability used to create an amazingly humorous piece of art. 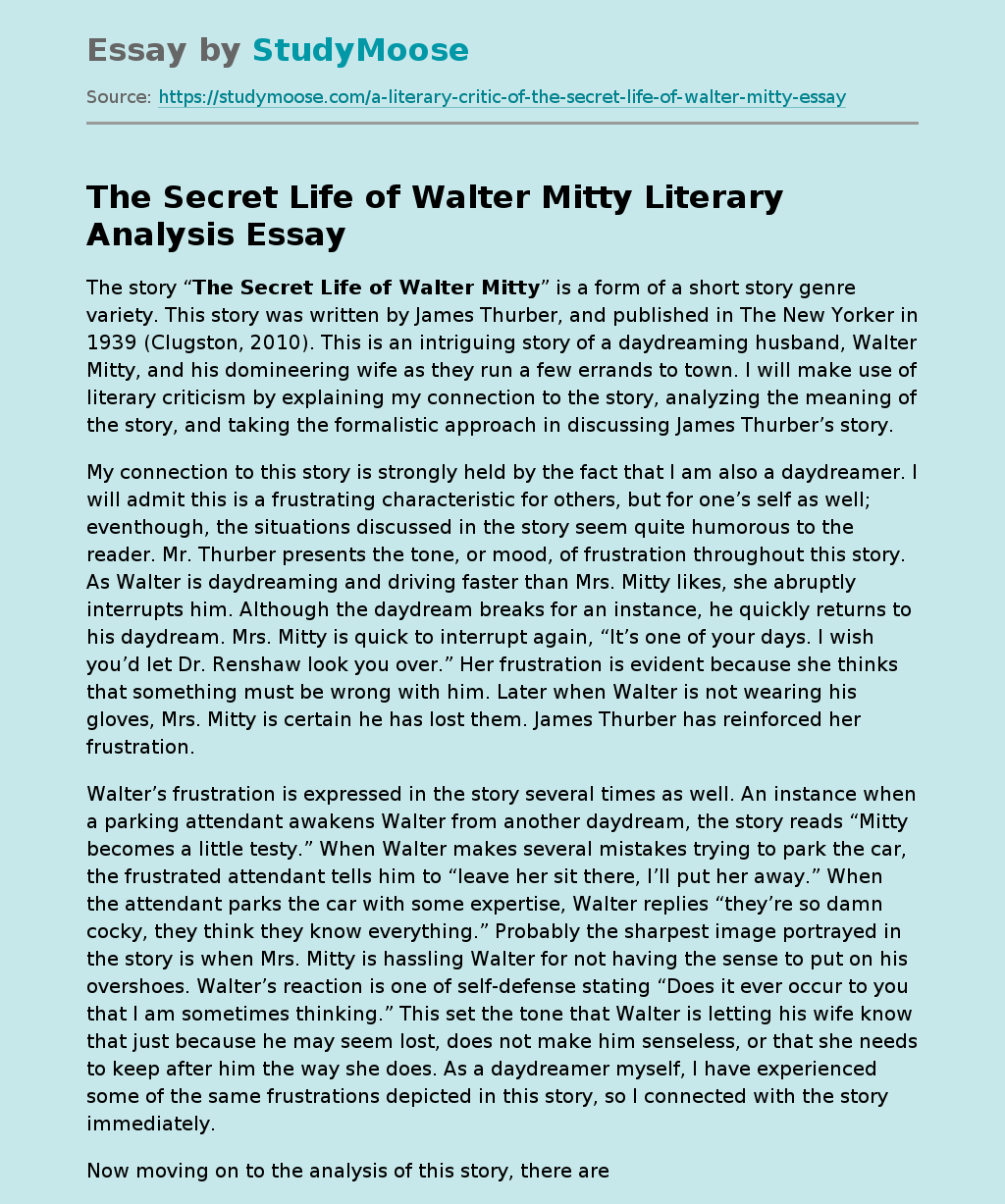