Symbolism and contrasting characterization In The Secret Life of Walter Mitty

In “The Secret Life of Walter Mitty”, James Thurber introduces to us the life of the estranged middle-aged chronic daydreamer, Walter Mitty. The overbearing wife, Mrs. Mitty, is portrayed mainly through her daily dialogues with Mitty, whose disdainful image is deepened by the gender attributes of the females existing in Mitty’s fantasy. This essay argues that through the contrasting characterization in fantasy and reality and the use of symbolism, the sequence of fantasies that Walter Mitty engages in is a journey of attempting to regain masculine potency and search for the lost identity resulted from his wife’s emotional abuse.

Don't use plagiarized sources. Get your custom essay on
“ Symbolism and contrasting characterization In The Secret Life of Walter Mitty ”
Get custom paper
NEW! smart matching with writer

There have been debates among literature critics regarding Mrs. Mitty’s function in her husband’s life. Among these controversies, it is worth noting that Mann defends the “ideal wife” image of Mrs. Mitty by arguing that Mrs. Mitty’s attitude toward her husband is “a response to, and not a cause of, Mitty’s fantasy life” (352). Countering to Mann’s argument, I concur with the majority that, although Mrs.

Mitty’s behavior is normal and logical considering Mitty’s recurrent absentmindedness, Mitty’s innermost yearning for females with attributes drastically different from his wife’s cannot be overlooked. This aspect is reflected in the contrasting characterization between fantasy and real life. Examining the conversations between the Mittys, it is apparent that Mrs. Mitty is either giving orders which Mitty reluctantly obeys without ever protesting, or questioning and disapproving Mitty’s behaviors that do not meet with her satisfaction. He looks at her as if she is the “grossly unfamiliar· strange woman who had yelled at him in a crowd” (Thurber 1).

This demonstrates that Mitty has long grown sick of Mrs. Mitty’s manipulation but is too intimidated by her nagging and bossy character to protest against her. In his daydreams, conversely, he fantasizes about the submission of the subordinate, “pretty” (Thurber 2) and “lovely” (Thurber 3) female characters to his authority. Along with the symbols implying Mitty’s desire to dominate over the female gender which will be discussed later in this essay, the contrasting portrayal of female characters illustrates that Mitty’s subconscious mirrors his inferior position to his verbally abusive wife who, therefore, is rather the ultimate cause of Mitty’s daydreams in which females tend to submit to him.

In addition to the contrasting female characters, power and strength levels are referred to multiple times in Mitty’s fantasies, and are usually associated with symbols suggestive of females’ inferiority that Mitty longs for in real life. In the first fantasy, when Mitty commands the Lieutenant to do a series of actions, he specifies a number of high strength levels such as “8,500”, “No. 8 auxiliary”, “full strength in No. 3 turret”, “eight-engined Navy hydroplane”, and intentionally refers to the engine as “her” (Thurber 1) as if he were to physically use his masculine power to take control over a female. This symbol of sexual manipulation can also be found in the fourth fantasy when he rakishly hums “Aupr?s de Ma Blonde” (Thurber 4) after deciding to battle on his own. In the second fantasy, the sudden malfunction of the anesthetizer makes the female subordinates panic, while Mitty seems to be the only man who can fix this “huge, complicated” (Thurber 2) machine. The emphasis on large capacity levels alongside the portrayal of the female’s inability again affirms Mitty’s subconscious dominance over the female gender.

Blythe and Sweet see Mitty’s five daydreaming sequences as “a continuous attempt at orgasm” (111), with Mitty exhausted at the end realizing he could never be able to escape from Mrs. Mitty’s domination or reach sexual climax. Similarly, I would argue that the daydreams are along Mitty’s journey of striving to gain his self-identification as a man in the society that he is currently alienated from, in order to compensate the long lost masculinity in real life resulted from Mrs. Mitty’s intense disdainfulness. It is obvious that the fantasized Mitty possesses every quality his wife negates in him in real life. The imagined Mitty is powerful in terms of strengths; authoritative, always executing orders rather than obeying; cocky and self-absorbed, emphasizing to himself the impotency of other male characters; determined, having the courage to defend himself when questioned by the others. However, in reality, he is no more than an inept middle-ager who is yelled at by the police, complained by the parking lot attendant, made fun of by the lady passing by, and bullied by his wife. This contrasting depiction further strengthens Mitty’s innermost desire for retrieving his dignity as a man in the society and liberating from his oppressive wife.

The fact that the memory of always having to go to a “young, grinning garageman” (2) to take off his car chains is particularly inserted among segments of Mitty’s daydreams is another symbol of Mitty’s masculinity crisis. With the car symbolizing manhood, Mitty’s incapability of fixing the car by himself implies his failure at being masculine or even attempting to be masculine. His wife ends up making him approach a younger and more capable garageman to make up for the absent masculinity, which in fact contributes to whittling down Mitty’s self-esteem. From the cocky male attendant, to the young male garageman, to wife’s insistence of making him wear “overshoes”, the way Mitty’s subconscious proceeds foreshadows the long-term intimidating influence of Mrs. Mitty in his life.

Moreover, Mitty’s latent hostility toward males is not only reflected by his superiority to all other males in fantasies, but also illustrated through real life events. For instance, Thurber explicitly describes Mitty’s thought after being grumbled about by the parking lot attendant with “insolent skills” “They’re so damn cocky” (2). Yet subconsciously he hopes to become a “cocky” figure with “insolent skills”. The contradicting self-recognition is due to Mitty’s confusion about his pursuit of masculinity, which he attempts to figure out a solution to through daydreaming. It is Mrs. Mitty’s constant denial of the masculine qualities in her husband that inhibits the latter from identifying himself properly. Consequently, Mitty’s somewhat pathetic personal heroism can only be fulfilled in daydreams.

Mitty’s hostility to his wife is extended beyond reality and carried out along his fantasies. As pointed out by Satterfield, the District Attorney in the third fantasy is the projection of the oppressive wife in Mitty’s subconscious. Although the fearless imagined Mitty succeeds in challenging the District Attorney’s objection of him and infuriating the latter, the real-life Mitty is too inadequate to challenge his wife whose long-term dominance has resulted in Mitty’s severe lack of self-esteem. Nonetheless, Mitty’s search for masculinity is intruded every time he is almost able to fulfill his mission. The merciless reality keeps waking him up from daydreaming and reminds him of how much of a failure he is in real life. In the end, after vaguely questioning his wife whether it ever comes across her mind that he is sometimes thinking, he realizes he can never escape from her suffocating manipulation and his journey is forever terminated thereafter. Pointed out by Blythe and Sweet (113), the progressive demotion of the imagined Mitty from “The Commander” to “Captain”, to a soldier facing the “firing squad” denotes his gradual loss of masculine control. Eventually, the “phallic” (Blythe and Sweet 113) symbolism of “erect and motionless” (Thurber 4) signifies his failure at attempting at sexual orgasm, suggesting the failure of his journey.

In conclusion, James Thurber uses symbolism and contrasting characterization to present to us the miserable, repressed life of the extremely henpecked Walter Mitty. Along Mitty’s journey of searching for masculine identity, he recurrently and almost unconsciously gets lost between the cold, merciless reality where he is regarded as a complete failure and the fantasized dreamland where he fulfills his ideal self-image constituting every masculine attribute that he has yearned for. However, he is at last brought to his knees by his wife’s long-term repression which has led to his irreversible deficiency of self-esteem. For future analysis, James Thurber’s portrayal of the gender images in that particular historical context could be further looked into.

Symbolism and contrasting characterization In The Secret Life of Walter Mitty. (2019, Dec 02). Retrieved from https://studymoose.com/symbolism-and-contrasting-characterization-in-the-secret-life-of-walter-mitty-essay 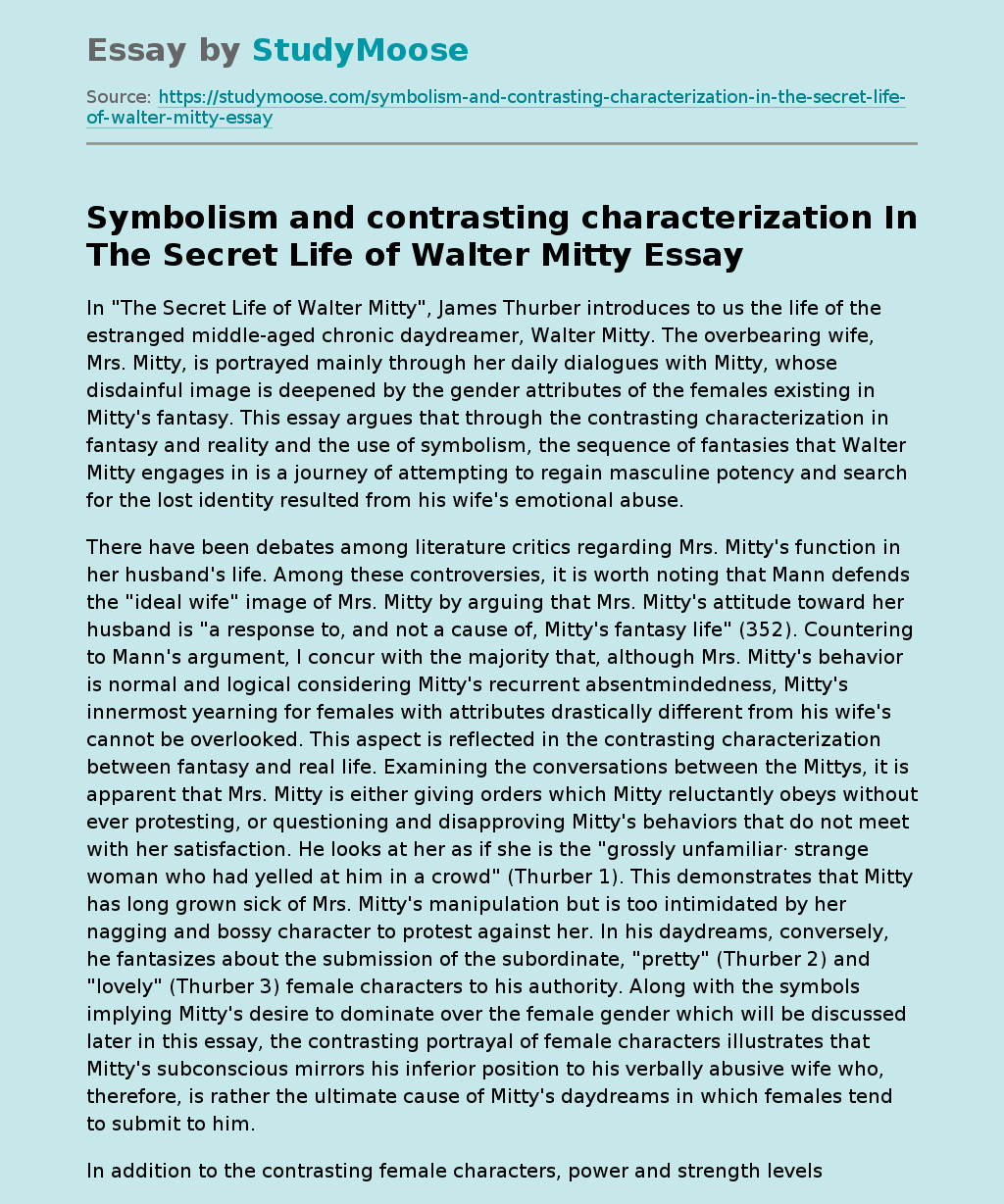