Mulan is a 1998 Disney film based on a two-thousand year old Chinese legend of a young girl, Fa Mulan, who secretly joins the Chinese army to bring back honor to her family. In China, one of the main religions practiced is Confucianism. Throughout the movie underlying themes of Confucianism virtues can be seen such as; honor for family and ancestors, duty to one’s self and devotion to order in society.(SpiritualityPractice).

There are many examples of family honor and honoring ones ancestors in Mulan.

Turn in your highest-quality paper
Get a qualified writer to help you with
“ Confucianism Virtues in Disney’s Mulan ”
Get high-quality paper
NEW! AI matching with writer

The movie opens with Mulan preparing to impress the matchmaker to uphold her family’s honor while her father is praying to the ancestors that she will find a good match. Mulan’s meeting with the matchmaker ends in disaster bringing dishonor to her family(Disney‘s Mulan).

Soon after a message from the emperor arrives declaring one male from every family must go to war. Fa Zhou, Mulan’s father, honorably takes his order to serve, because there is no son to serve in his place.

Even though Fa Zhou is old and disable, he had rather die for his country than to dishonor his family by not going to war. Fa Zhou is the greatest example of the virtue of devotion to order in society in the film(Disney‘s Mulan).

To restore her family’s honor and to keep her disabled father from going to war, Mulan disguises herself as a boy and joins the Chinese army(Disney‘s Mulan).  In the film there is also a dragon named, Mushu, hoping to regain honor for himself.

Mushu is a demoted guardian of the Fa Family. Mushu had previously dishonored the family and has since not been allowed to be a guardian. Mushu comes up with a plan to bring honor back to himself by going after Mulan to guide her to become a war hero(Disney‘s Mulan).

As a girl, Mulan’s only duty to herself is to find a suitable husband that will take care of her throughout her life. Marrying well is also the only way Mulan can bring honor to her family as a girl.

When Mulan is pretending to be a boy her duties to herself are to become a great solider and by doing this she can bring honor to her family. Mulan must also become a great solider as a duty to others. If she is not a great solider she would let down her fellow soldiers who she must serve with to protect the emperor. Mulan at first is a terrible solider but quickly becomes better and wins over her peers in the army(Disney‘s Mulan).

In one scene Mulan and her fellow troops face the Huns. Mulan heroically saves herself and troops but while doing so is cut in the side by the Hun leader. When Mulan is given medical attention, her secret is discovered. Shang, her captain, instead of killing her for her act of treachery leaves her to go home while Shang and the troops march toward the Imperial City(Disney‘s Mulan).

Mulan finally regains her family’s honor by defeating the Huns and saving the emperor. By saving the emperor, she also maintains her duty to society. The emperor awards her with the highest honors and asks her to be in his council. Mulan chooses to go home and be with her family instead. She returns carrying gifts of honor to her father who throws them aside and as he tells her, “Having you for a daughter, is the greatest honor of all.” Shang shows up to return Mulan’s helmet to her, and he then stays for dinner. It is alluded to that Mulan and Shang soon start a courtship.

The movie ends with Mushu also regaining his position as a guardian of the Fa family followed by a party with him and the other ancestors(Disney’s Mulan). The film Mulan is a good illustration of Confucian duties in China. Mulan helps Westerners gain an idea of what life in a Confucian culture might have been like in the time of Mulan. 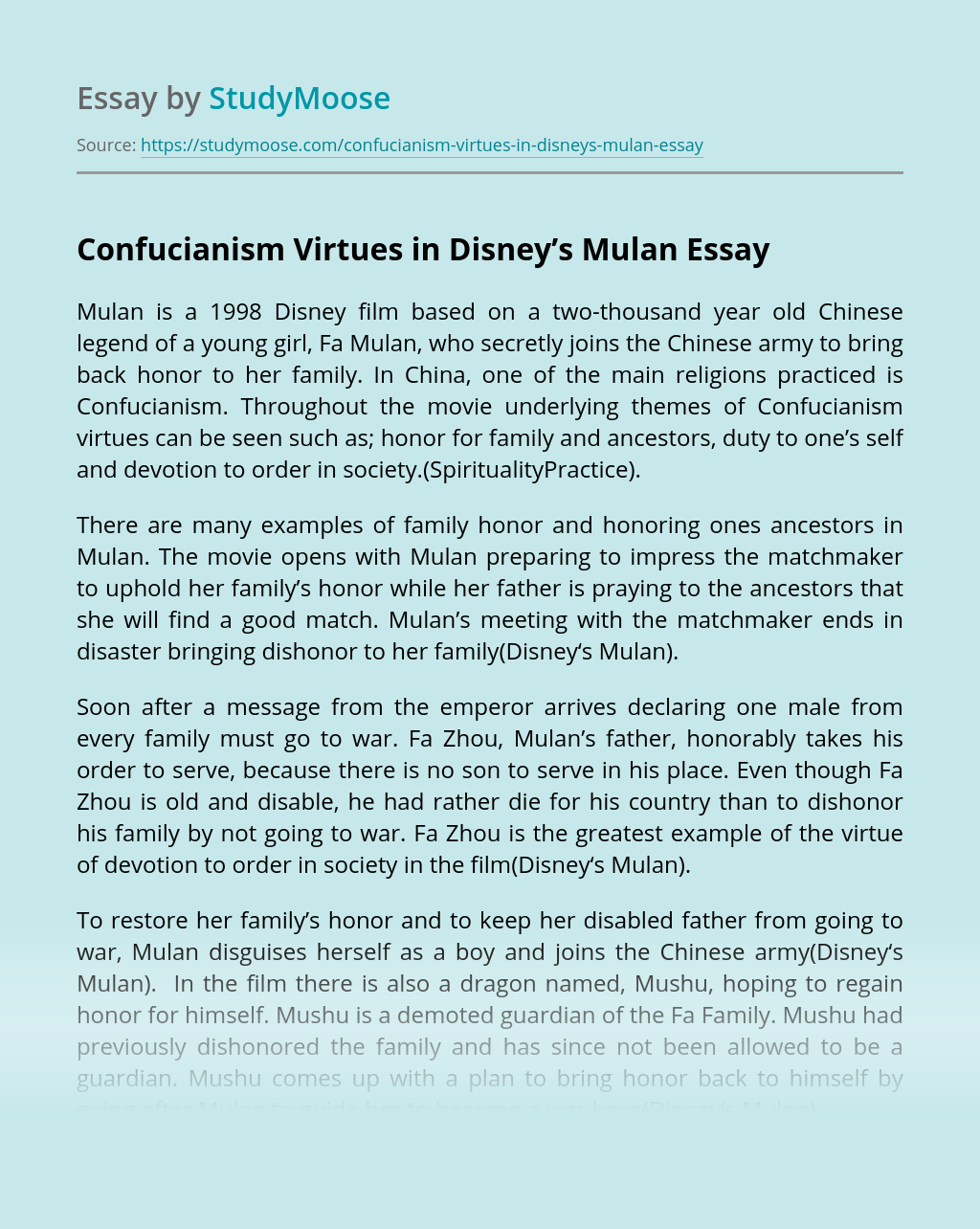 Turn in your highest-quality paper
Get a qualified writer to help you with
“ Confucianism Virtues in Disney’s Mulan ”
Get high-quality paper
Helping students since 2015
Stay Safe, Stay Original