Comparing and contrasting Achilles and other warriors

Comparing and contrasting Achilles and other warriors

Achilles is one of the main characters in Homer’s Iliad. Iliad is a legendary epic covering the formative years of Roman and Greek mythology. Iliad pursue glory, heroism, and love within the authority and influence of supernatural powers. Achilles possessed heroic strength and also had close contact with the gods. Achilles had all the qualities of a grand warrior and he proved to be the most dominant man among the Achaean army.

Don't use plagiarized sources. Get your custom essay on
“ Comparing and contrasting Achilles and other warriors ”
Get custom paper
NEW! smart matching with writer

However his deeply rooted character barred his capacity to act with integrity and nobility. The rationale of this paper is to analyze the character of Achilles and examine how he was similar of differed from other heroic warriors.

He was driven by thirst for glory and was willing to sacrifice anything for his reputation. Achilles had extreme temper; for example, though the demise of Patroclus provoked him to reconcile with Agamemnon, this did not alleviate his fury but he directed his anger to Hector (Homer, 1990, p. 32). Achilles forfeited twelve Trojan men at the funeral of Patroclus, he also killed his opponents mercilessly and shamefully vandalized the corpse of Hector. These events reveal Achilles great anger because he was mourning the death of Patroclus.

Achilles is recognized as the greatest warrior in Achaian army and no other warrior could match him as a fighter. Achilles has a great sense of social order because he decided to act during the plague that was consuming the soldiers at Achaian camp. Agamemnon, Achille’s kind did not act so Achilles decided to find out the cause of the plague by calling for a congregation of the entire army. Achilles is argumentative and petulant because he argues that though Agamemnon gets the best prizes from war, he never worked for them. In the course of argument, Achilles almost killed Agamemnon, though he was saved from carrying out the heinous act by goddess Athena. Achilles believed that the quarrel between him and the king was righteous and same as the war against Trojan army. Achilles major characteristic was excessive pride because he remained angry even after Agamemnon promise to return Briseis alongside other gifts (Vigil, 2006, p. 47).

Gilgamesh is a warrior who fears death throughout George XIII epic. Achilles on the other hand is also very keen with his metaphoric wickedness that can only take place after the death of his earthly life. Gilgamesh and Achilles have a lot of similarities, which include dynamic attitude on death and life centered. They have similar attitudes especially when their heroic comrades died. The death of Patroclus touched Achilles very much whereas the death of Enkidu also caused much distress to Gilgamesh. Achilles and Gilgamesh are two semi-divine heroes who have various matching characteristics and life-events, and they focused a lot with their mortal lives, but not relatively in the same approach. Achilles and Gilgamesh share fundamental similarities in their mortal lives. Each of them is a child of a goddess and a mortal man who happens to be a king. Achilles is a son of Thetis and has an exceptional rapport which enables him to speak with the gods with the help of Thetis (Homer, 1990, p 27). Gilgamesh on the other hand is regarded as one third human and two third god, which makes him to stand out as an exceptional character that exists in relationships with both the mortal world and divine world. Iliad relates the preeminence of Achilles and Gilgamesh in battle where they reveal themselves as headstrong warriors.

Neither Achilles nor Gilgamesh is concerned with romantic and family relationships. The major relationship these epic heroes have is with their mothers, where they seek protection and guidance. Through this rapport, they are able to gain development and wisdom. Achilles can also be compared to other heroes such as Aenes since their lives is determined by supernatural powers. In the book Iliad and Aeneid, Achilles and Aenes are characters who reveal their chivalry and bravely. In the books, Aenes and Achilles are chosen by gods and favored in various periods of their lives (Homer, 1990, p.26). These characters have predestined death and fate, they are sons of gods and they have specific accomplishment and mission in their lives. The major difference between Achilles and Gilgamesh is on anger management. Even after the death of his friend Enkidu, Gilgamesh remains cool and does not translate his fury to anyone, but Achilles anger could not be controlled after the death of Patroclus. Gilgamesh mourns the death of his friend by ritually pulling his clothes and hair, but Achilles mourns the death of Patroclaus by killing several Trojan warriors.

An in depth analysis of the epics of the era reveal contrasting features of the heroes. The circumstance, the physical features and situation might be similar, but the discrepancy is mainly due to mental and intellect framework of the heroes. Aenes fought major battles just like Achilles, but their fate was different. Achilles was predestined to die in the battle, while Aenes was predestined to be an architect of a huge town in the planet. Achilles was more of a cruel enemy and fierce warrior and his task was to wrestle and triumph over bloody wars. On the other hand, Aenes was more civilized and constructive in comparison to arrogant Achilles. Achilles is violent, stubborn, ruthless and hostile and had a capacity to kill Trojan warriors ruthlessly in the battlefield. Achilles battle and attack intended huge massacre. On contrary, Aenes is more placid and sober. Aenes as a warrior had adorable features of restraint, chastity, discipline and love. He was a true leader who never left his comrades. Aenes led the warriors to pursue new home and new culture. He was a fighter, but not even once did he display emotions and power in arbitrary and cruel manner (Vigil, 2006, p. 74).

In conclusion, Achilles was a great warrior, but he was a merciless fighter who killed many Trojan warriors. Achilles shared similar features with other heroes in the epics. These heroes fate was usually predestined and they were mostly sons of gods. They sought advice from their mothers which helped them to develop and gain wisdom. However, an in depth analysis on the character of these heroes depict that there are some differences. Achilles was a violent warrior as compared to most heroes who were able to manage their fury. In addition, Achilles, Aenes and Gilgamesh were heroes of their times.

Comparing and contrasting Achilles and other warriors. (2015, Oct 25). Retrieved from https://studymoose.com/comparing-and-contrasting-achilles-and-other-warriors-essay 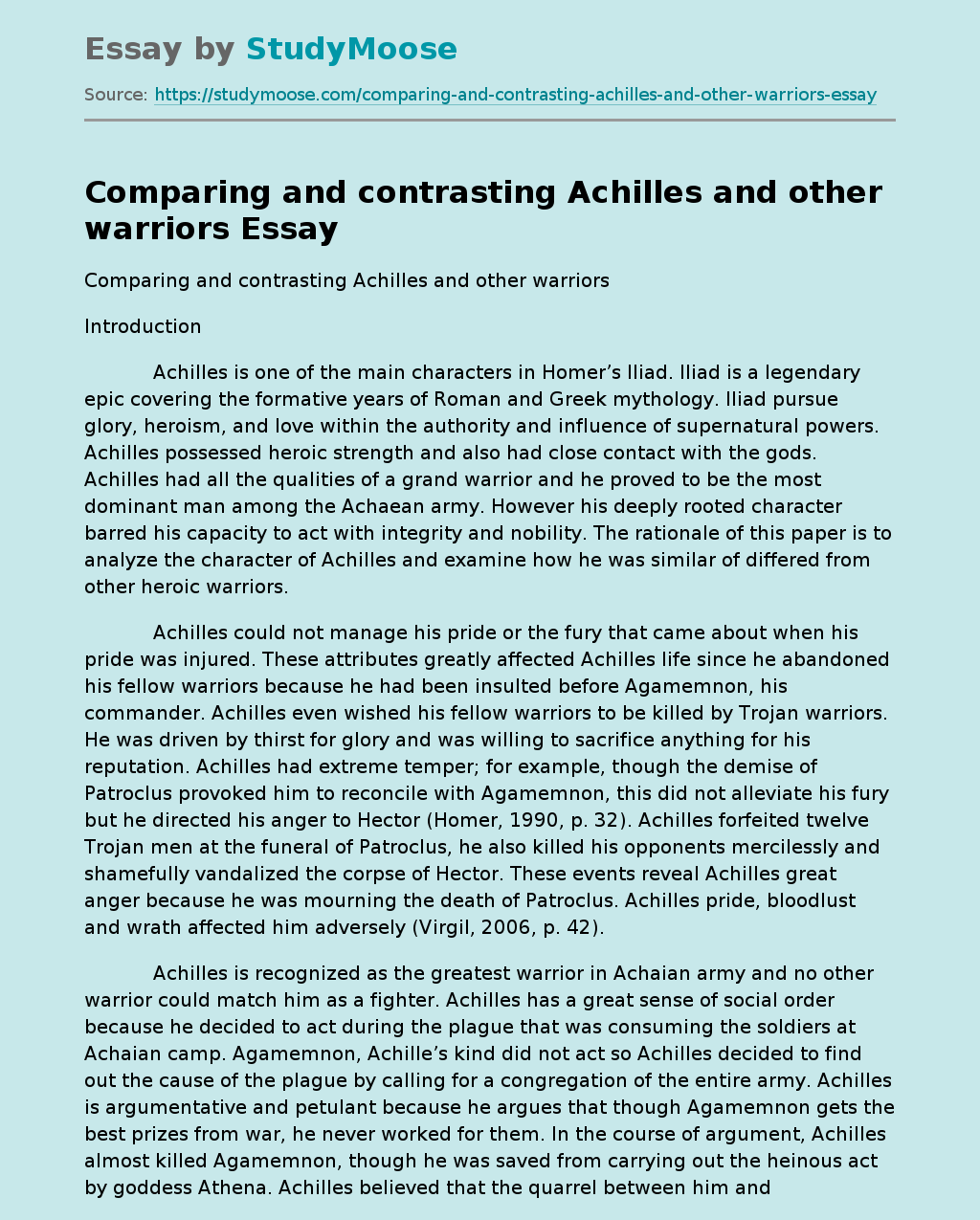