Theseus and Achilles were both great heroes that played important roles in Greek Mythology. Theseus saved many lives by killing a Minotaur, and by solving the labyrinth. Achilles was a fierce combatant for the Greeks in the Trojan War. Both heroes accomplished many great challenges in their lifetimes; however, it is hard to decide who the better hero is. While both Achilles and Theseus fought for their people, Achilles was more concerned about his own well-being, whereas Theseus cared more others.

Don't use plagiarized sources.
Get Your Custom Essay on Greek Mythology Compare And Contrast Just from $13,9/Page

Throughout Theseus’s and Achilles’s lives, Theseus led a much more selfless life than Achilles.

On the other hand, Achilles could not care less about others. When Achilles was called to go fight for the Greeks, he stayed in his tent.

“While Achilles stayed in his tent a fierce battle followed, the hardest yet fought” (Hamilton 263). Agamemnon, a fighter for the Greeks, made Apollo angry because he took the daughter of Apollo’s priest, Chrysies, and would not return her. Apollo punished the Greeks by sending arrows down that sickened and killed them. Achilles was angry with Agamemnon because he made things difficult and his actions resulted in many Greek deaths. Achilles’s mother disliked the Greeks and told Achilles to stop fighting for them. Achilles had no problem rejecting his own people.

Read Also: Topic for a Compare and Contrast Essay

Achilles was not nearly as courageous as Theseus was. Achilles tried to get out of going into the Trojan War. His mother said he would die if he went into the war so she dissuaded him. “The sea nymph knew if he went to Troy he was to die there” (Hamilton 258). Because Achilles did not want to fight, he dressed up like a girl so he would not have to go into the War. Achilles’s act of dressing like a girl when the Greeks needed him proves him to be a coward. Theseus and Achilles were different when it came to respect. Theseus was respectful and Achilles was not.

Theseus showed respect for the Thebans when they asked for their loved ones to be buried. Theseus did not make the decision himself, but instead let the people of Athens decide. “If the citizens consent, then I will go to Thebes” (Hamilton 390). Theseus considered their request which shows he was respectful. Achilles however was not respectful. When Achilles killed Hector, Achilles tied Hector’s body to the back of his chariot and dragged Hectors body behind it.

“He (Achilles) pierced the feet of the dead man and fastened them with thongs to the back of his chariot” (Hamilton 274). Achilles showed no respect for the Trojans or the gods. Achilles angered the gods with his act. Achilles was rude and disrespectful. Theseus and Achilles were similar in some ways but their differences ultimately made one hero superior over the other. Overall Theseus was selfless, courageous, and respectful towards others. Achilles was cowardly, selfish, and disrespectful. It is obvious who the better hero was. Achilles and Theseus were both great heroes, but ultimately, Theseus is the greater hero. 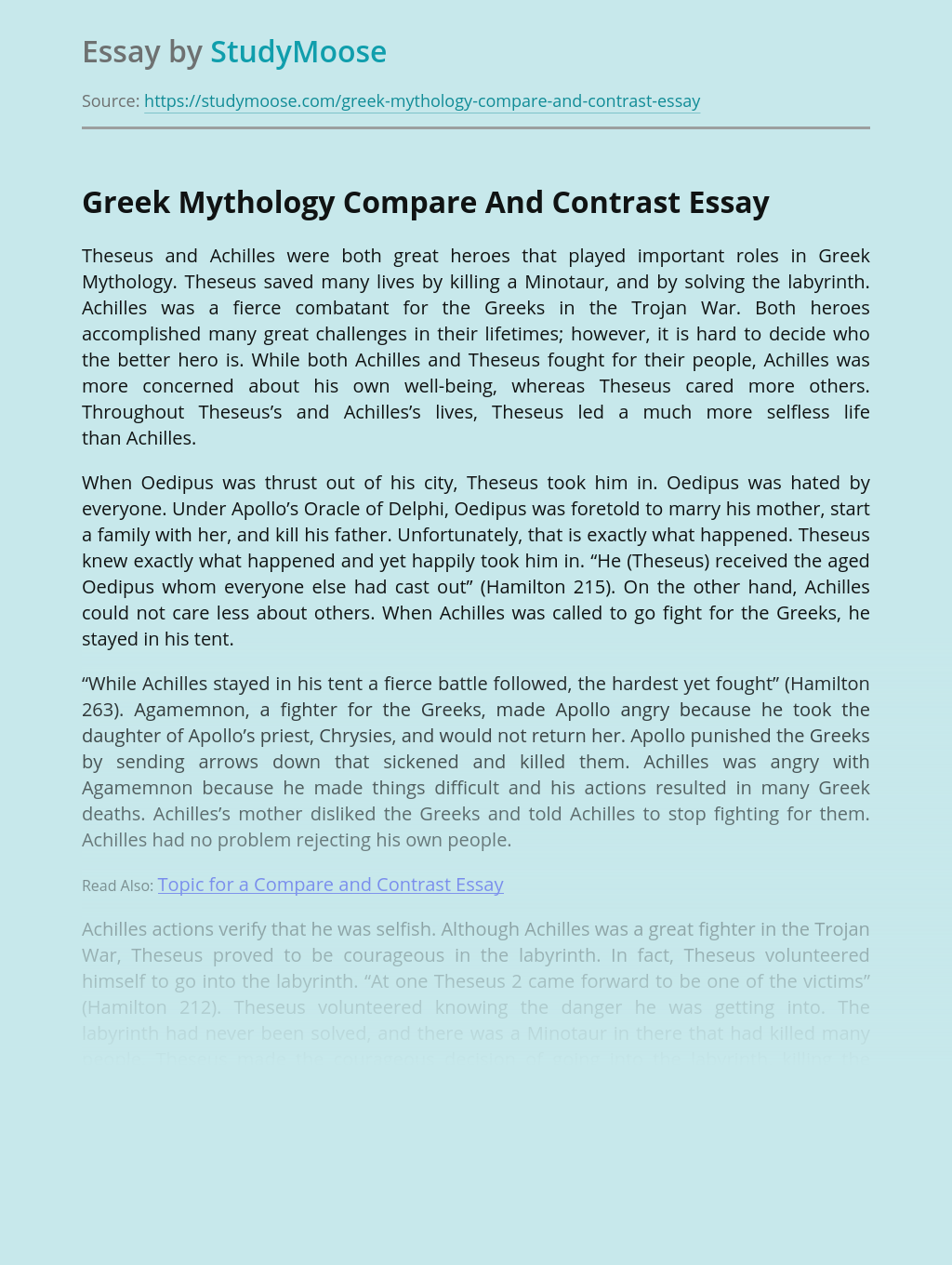 Before the commencement of the analysis, it is important to realize that the airline industry is a global industry with many players interacting in the market. These include airlines such as Etihad Airways, Emirates, Cathay Pacific and United; air craft manufacturing companies such as Boeing, Airbus and Douglas; governmental organizations, regulation authorities, and the millions...

In the present economic situation, the prices of different goods and services are always increasing everyday. Money has become quite hard to earn. Therefore, many people are looking for ways to save their money. In my opinion, as a housework, I think saving money at home is one of the best ways to save our...

Get Essay
Psychology literally means the study of the mind

Psychology is the scientific study of behavior and mind. I am interested in this career because of various reasons. Since I was a little girl, I have always enjoyed helping others, especially those who have disabilities or those who have little. Throughout the past five years, I have been able to get involved within different...

Metacognition has generally been described as thinking about one’s own thoughts. The realization that a human being cannot exist in isolation of his inner self, that he is constantly probing that dam of his very essence to evaluate situations and resolve the never-ending puzzles that daily confront him. Kornell (2009), has described metacognition as self-reflection...

It all started with a propagandist writing one pamphlet that was made by an anonymous English man. This person didn’t just make the revolutionists more boastful and proud of themselves and made the bestseller of the 18th century, but he ignited them to split away from England and persuaded them to go on the road...