Greek mythology is a vast subject with a seemingly infinite number of members. Consequently, only the chief individuals such as, Zeus, Hera, Athena and Ares, are well-known. Often forgotten are the so-called minor goddesses, the goddesses who lurk behind the curtains. Surprisingly, such a “negligible” goddess caused the greatest dispute in all of Greek mythology. The Greek Word ‘Eris’ means strife. Although Strife is an abstract idea, Eris is referred to as a goddess (Blackwell 72).

Although Eris is not well-known in Greek mythology, “[h]er influence can be felt in every quarrel, feud and disagreement on the face of the earth and on the heights of Mount Olympos (Olympus).

Don't use plagiarized sources. Get your custom essay on
“ Greek Mythology and Eris ”
Get custom paper
NEW! smart matching with writer

(Atsma). “She is the friend and sister of Ares, and with him she delights in the tumult of war, increasing the moaning of men. ” Eris is also the mother of various allegorical beings, which represent man’s hardships (Smith). These include Ponos (Toil), Lethe (Forgetfulness), Limos (Starvation), the Algea (Pains), the Hysminai (Fightings), the Makhai (Battles), the Phonoi (Murders) the Androktasiai (Man-slaughters), the Neikea (Quarrels), the Pseudo-Logoi (Lies), the Amphilogiai (Disputes), Dysnomia (Lawlessness) Ate (Ruin), and Horkos (Oath).

Her children are collectively referred to as the Kakodaimones (Atsma).

In Rome, Eris is referred to as Discordia (Monaghan). Eris appears in a few myths but plays a prominent role in a particular one (Nardon). Eris was not liked in Olympus and it was primarily because of this hostility that she was not welcome at a notable wedding (Hamilton 256). The marriage between Peleus, a mortal king, and the sea nymph Thetis, daughter of Zeus, was a distinguished event on Mount Olympus. All the famous mortals and gods and goddesses were present except herself.

Eris was insulted and predictably, decided to cause some trouble. She arrived at the wedding reception in a rage and tossed a golden apple into the air. On the golden apple were the words, “To the Fairest”. Who deserved the beautiful golden apple? The competition was stiff between Aphrodite, the goddess of love, Hera, Zeus’s wife and queen of gods and Athena. Zeus’s daughter and goddess of wisdom. Zeus was asked to select the winner. However, Zeus was no fool. He wasn’t getting involved in this predicament (Blackwell 95).

He told them to go to Mount Ida where they would find Prince Paris of Troy, also known as Alexander. When the three gorgeous goddesses appeared before Paris, he was shocked. However, Paris was not asked “to gaze at the radiant divinities and choose which of them seemed to him the fairest, but only to consider the bribes each offered and choose which seemed to him the best worth taking. ” Hera would make him Lord of Europe and Asia; Athena would lead the Trojans to victory against Greece; Aphrodite would present him with the loveliest woman in the world.

Paris chose the last and Aphrodite received the golden apple. The beautiful lady he was promised was named Helen, a daughter of Zeus. However Helen was already married. When her angry husband Menelaus discovered the absence of his wife, he waged war against Paris, who had abducted her (Hamilton 256). This tragedy became known as the Trojan War. Three generations of despair and blood shed all started because Eris was unwelcome at a wedding (Blackwell 95). Hercules once came upon Eris’s golden apple. He struck it with his club before the apple swelled to twice its original size.

After yet another blow, the apple doubled in size again. Hercules stares at Eris’s legendary apple in confusion. Athena then reveals that “[i]f you just leave it alone, it stays small; but if you decide to fight it, then it swells from its small size and grows large. ” (Atsma). Eris is also known for her involvement in marital discord. The story of Polytekhnos and Aedon conveys Eris’s contribution to matrimonial strife. One day, Polytekhnos and Aedon state that their love for each other is greater than that between Hera and Zeus. Infuriated, Hera requests Eris to initiate conflict between the couple.

An expertise in the area, Eris executes a plan that kills Polytekhno’s son before turning Polytekhno and Aedon into birds (Atsma). Eris is involved in several other myths, although the Trojan War may be considered her prevalent feat. Eris’s primary strength is her ability to initiate commotion and war whenever she pleases. Eris moves about cunningly, seemingly insignificant at first sight. Yet it is evident that her trivial actions result in detrimental consequences. This can be clearly understood from the disastrous Trojan War. As a proponent of war and discord, Eris basks in slaughter (Atsma).

Undeniably, Eris isn’t the epitome of a compassionate goddess. “She is insatiable in her desire for bloodshed, and after all the gods have withdrawn from the battle-field, she still remains rejoicing over the havoc that has been made. ” (Smith). While she is despised, Eris is feared and respected for her perpetual and vindictive wrath (Stewart). Although Eris is often described as ruthless and harmful, Eris is also credited as the goddess who prods a lazy man to work. This lazy man compares himself to his successful neighbor and envies his accomplishments. The lazy man is then encouraged to work diligently.

In such cases, Eris may be considered a friend to mortals (Atsma). Neither in Ancient Greece nor Ancient Rome was Eris worshipped . However a religion known as Discordianism was founded in the 1950s. The religion centers around Eris and her values which include: randomness, chaos, disagreement. Ironically enough, the first rule of Discordianism is that there are no rules. Furthermore, some of the followers themselves, known as Discordians or Erisians, embrace the religion as a joke. Nevertheless, there are those who consider the religion a philosophy and literally worship Eris (Beyer).

As the goddess of strife and discord, Eris tends to be victorious in her objectives. Her ability to instigate tension at any time could be an explanation for her success. Eris is notoriously known for the commencement of the Trojan War as well as for her association in marital dispute (Atsma). She is detested yet respected and her appeal for bloodshed and manslaughter contributes to her cold-blooded goddess persona (Stewart). Although she was not worshipped in ancient times, a novel religion, Discordianism, revolves around the values she represents (Beyer). 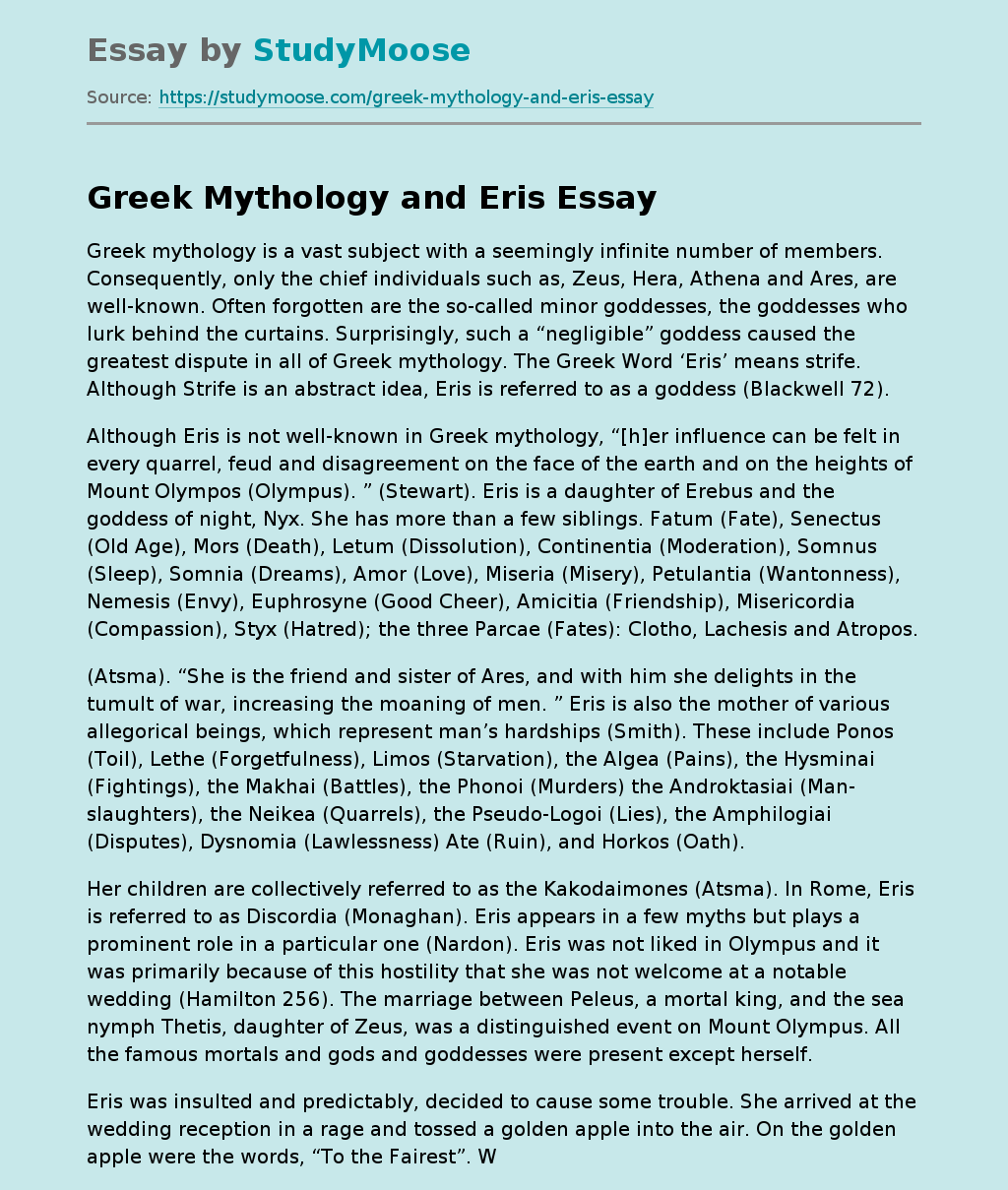