Zeus and Thor are both respected gods in Norse and Greek mythology. Both have amazing strength and powers and were feared by many because of this. While both were the all mighty gods of their time, one huge difference was that Zeus was the god of all gods. In Greek mythology there was no one who ruled over Zeus and ultimately Zeus was in control of all the gods and people. While Thor was the strongest god of Norse mythology, his father Odin was the supreme ruler of the gods like Zeus was in Greek mythology.

Don't use plagiarized sources. Get your custom essay on
“ Gods: Greek Mythology and Thor ”
Get custom paper
NEW! smart matching with writer

While both had amazing strength, Zeus still had the power over all the gods which Thor did not. One of the huge similarities is that both Thor and Zeus were gods of the sky and thunder. Zeus would use a thunderbolt as his weapon and Thor would use his hammer in which only he was able to lift. Both of these gods also had a similar appearance.

Both were muscular built and had long hair and also a long beard. Thor and Odin also both had children outside of their marriage. While Thor had children with two women, Zeus was known for his lust for women and sex and had a very large number of children.

Zeus’s lust for women was one of his biggest weaknesses and also got him in a lot of trouble with his wife. While Zeus was the God of all gods and the common man respected him, Thor seemed to be more worshipped and liked as a god.

Thor was the protector of the people and did not require any form of sacrifice from the people for his help. This is one of the reasons Thor surpassed even his father Odin in popularity. Odin required human sacrifices since he needs warriors on his side to fight with him at the Ragnarok, while Thor did not since he is practically a one-man army.

These made him more liked then even his father Odin who was the god of all gods in Norse mythology. Another large difference between Thor and Zeus was the fact that Zeus was immortal and Thor was not and would eventually die. The Greek Gods were immortal, and were never depicted as in danger of “dying”. While most pantheons were immortal, the exception to that rule was the Norse Gods, who could die from injury or old age. Thor and other Norse gods would eventually die in the battle of Ragnarok. He fought the Midgard serpent, which surrounds the whole world.

While he did succeed in killing this serpent, he walked about nine paces from its dead corpse and died from the poison it had spewed out onto him. While Thor was the mightiest God of his time just as Zeus, He was unable to avoid the faith of dying during this battle. Zeus is meant to rule Mount Olympus for all eternity amongst the rest of the Greek gods. Zeus had a hatred for his father unlike Thor. Thor fought alongside of his father while Zeus was the destruction of his. Zeus could not actually kill his father because his father Cronus was immortal just like Zeus.

Instead, Zeus used his father’s own weapon to slice Cronus into a thousand pieces. Zeus then tossed all the pieces into Tartarus, the deepest crater in the underworld, and Cronus never escaped. Cronus was still alive because he was immortal, but he was harmless since his body was scattered in Tartarus. Thor had nothing but respect for his father and would do anything to help him. While Zeus did destroy and hate his father, he had plenty of reason to since his father was not what most would consider a good father.

Cronos would have eaten Zeus like he did to the rest of his brothers and sisters, since he had a fear that one day one of them will rule over him. If it was not for Zeus’s mother Rhea creating a plan to save him, Zeus would have been eaten by his father and not have overthrown him and become the ruler of the gods. Overall both gods possess exceptional power and are the strongest of their times. Both gods are extremely dangerous and getting on their “bad side” is not generally a good idea. To me is seemed Thor was liked a lot more by the people then Zeus was.

But with Zeus’s affairs and also the fact that he was the most revered god of his time, while Thor was not really the most revered god since Odin was, Zeus had a lot more criticism. I liked how Thor had his special weapon (Mjollnir Hammer), but I felt as if Zeus using the thunderbolt as his main weapon made him just appear more as a “Sky God” even though Thor does use thunder as a weapon as well. Both gods have many differences and similarities but one thing everyone can agree with is that no one wants to get into a battle with either of these mighty gods. 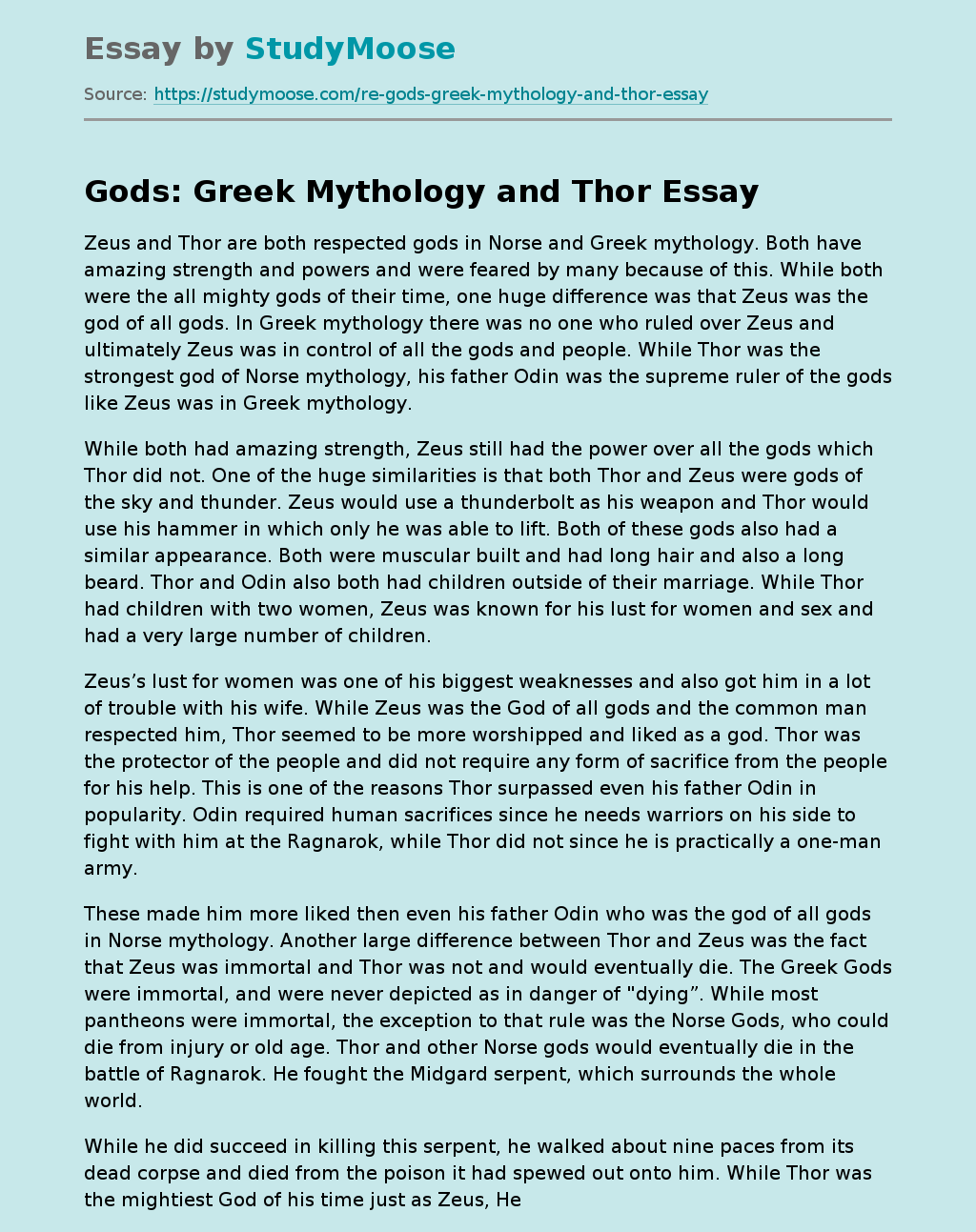