“Forget the big players in the world; it is the people in the margins of our society whose stories are most compelling. ” To what extent do you agree with this statement? Respond to this question with close reference to one or more text(s) you have studied. The Heke family that feature in the ground-breaking New Zealand film from 1994, ‘Once were warriors’ directed by Lee Tamahori are clearly a family living on the margins of society. They live in a state house next to a busy and noisy motorway in South Auckland, New Zealand.

Don't use plagiarized sources. Get your custom essay on
“ Once Were Warriors ”
Get custom paper
NEW! smart matching with writer

Their story is undoubtedly a compelling one: an abusive husband with a love of beer drinking and parties who gains respect from the use of his fists at the local pub; a long-suffering wife who has somehow managed to hold the family together through an obviously tumultuous 18 year marriage; a disillusioned older son who flees the dysfunctional household to join a gang; a pubescent daughter who is the de-facto mother of the family; another son who has gotten in with the wrong crowd and is committing petty theft and two younger children, Polly and Huata.

Director Lee Tamahori uses a range of camera and sound techniques, dialogue and compelling themes to teach us about the dangers of excessive alcoholism and moving away from our ancestral connections. Jake ‘the muss’ Heke is a compelling protagonist. After being laid off from his job, he uses his redundancy money to bring home seafood for his family. We are initially positioned to see him as a loving and caring family man, that is until his wife Beth discovers he has been laid off and sees her dreams of buying their own home go out the window.

Jake is a man of excuses who sees the dole as being “only 15 bucks a week less than my wages” and bursts into a tirade of abuse when his wife Beth resists his sexual advances after discovering the truth. Jake also excuses his own propensity for violence when he says, “Look when I get like that, get out of my way, but you’ve got to get all lippy on me. Sure I’ve a temper, but who hasn’t? ” It is apparent that Jake has an inferiority complex dating right back to his courting days of Beth saying “I was never bloody good enough” and that he descends from a “long line of slaves” unlike Beth who originates from more upper-class Maori roots.

What this highlights is that domestic violence, while inexcusable can often have its origin in insecurities from years beforehand. This is why men in particular need to seek help when they are struggling with issues instead of resorting to excessive bing-drinking to numb emotional pain. Jake’s wife, Beth is also on the margins of society as we see her struggling to raise her family amidst all the physical and verbal abuse around her. Gradually the low angle shots of Beth become more prominent as her courage to stand up to her abusive husband increases as also seen in her dialogue. I won’t have any more of these parties or your bloody ugly mongrel mates coming over. ” Tragically, Beth’s surge in power in response to Jake’s failure to take the family to see Boogie in the Boy’s home comes too late, as unbeknownst to her, Uncle Bully has raped her daughter, Grace sending her into a downward spiral which culminates in her suicide. Beth’s courage in standing up to Jake and restoring the family without him is compelling.

It must have inspired many women across New Zealand and indeed the world to leave behind dysfunctional and violent domestic set-ups. The fabulous low-key lighting and low angle shot of Beth at the end as she calmly informs Jake that ‘from now on I make the decisions for my family’ is inspirational and reminds us of the ‘mana, pride and spirit’ that many Maori have. She finally goes ‘home’ to her Maori ancestral roots as well as literally home to restore her devastated family in the wake of Jake’s departure.

Perhaps the most compelling story of hope in the film is that of younger son, Boogie who is ‘sent into welfare’ after the state decides his family can no longer control him after his mother, Beth fails to accompany him to a court hearing (due to suffering a beating and rape at the hands of Jake) as a result of a string of petty crimes. Boogie finally gets the tough love he needs from Maori man, Bennett a distinguished tane who teaches Boogie to use ‘his taiaha on the inside,’ instead of on the outside.

Boogie learns that true mana is found by using your mind and developing the inner-strength and resolve to solve problems instead of resorting to violence. Bennett, initially called a ‘black bastard’ by Boogie despite being Maori trains Boogie to reconnect with his maori tikanga and culture which effectively clears up Boogie’s confusion about his Maori identity and that this can be a source of pride. This shows that with the appropriate guidance, initially wayward youth can have a chance to redeem themselves, although this is a job parents and to a lesser extent teachers need to be doing.

State foster homes should only be a last resort. In conclusion, ‘Once Were Warriors’ left an indelible mark on the psyche of many New Zealanders with its brutal violence and depiction of problems such as binge-drinking and poverty that previously were swept under the carpet. Only by examining characters on the margins of society can we truly learn how easy it is to get there ourselves if we do not value our families, our education or seek help when we are struggling with issues from our past. The story of the Heke family is a compelling one and a story we would do well to consider seriously.

Once Were Warriors. (2016, Nov 05). Retrieved from http://studymoose.com/once-were-warriors-essay 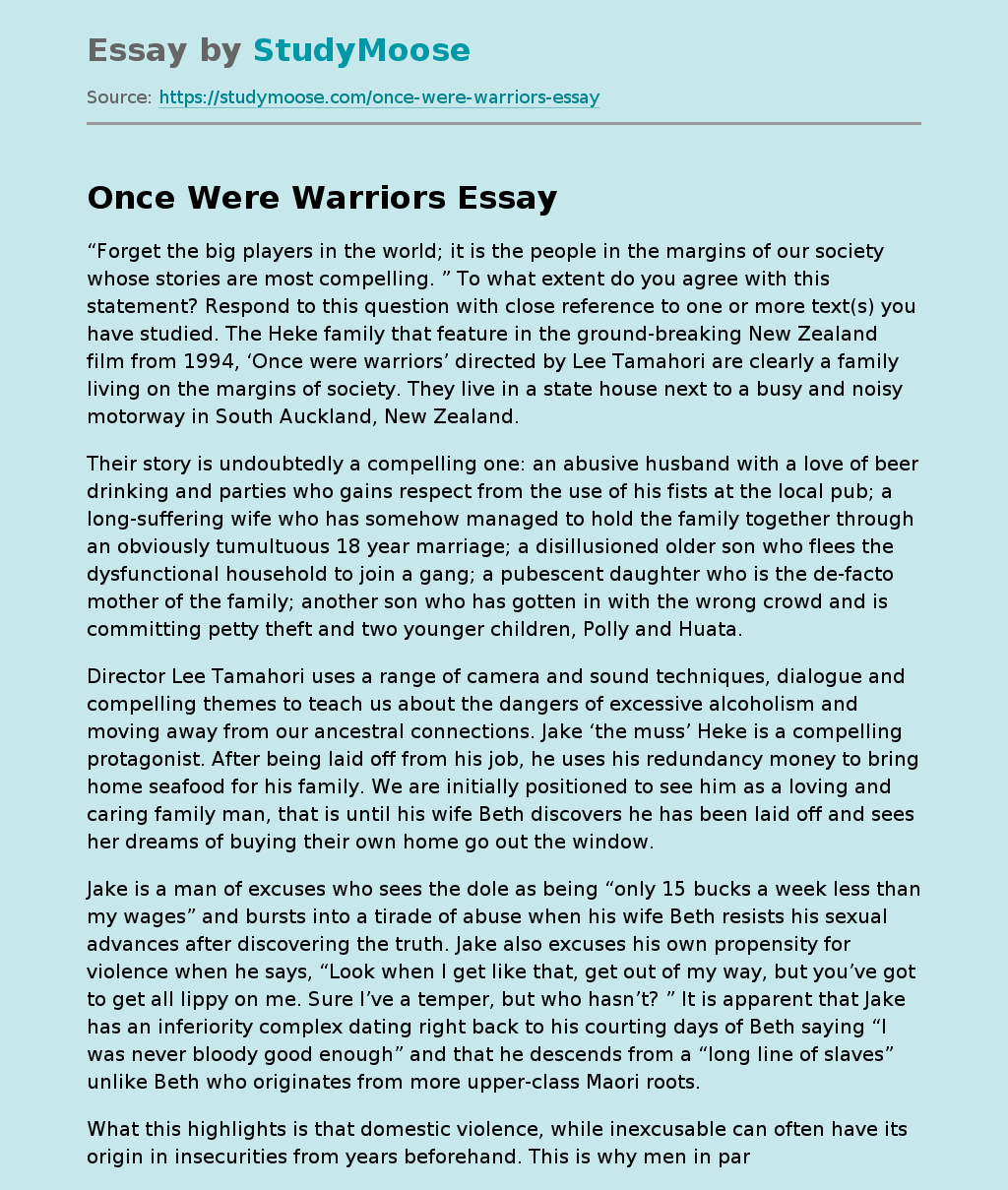