Once more to the lake

1. In the opening paragraphs, White’s attitude was of reminasance and awe. The nostalgia of his memory shared with us not once but twice. His urge to revisit the lake was strengthened with the readers urge to read just a bit more detail. White claws us into the memory with him, like we were there as a story teller, telling ourselves about what was happening, what it smelled and felt like. His attitude was of a warm “jollity” that invited us to join.

Don't use plagiarized sources. Get your custom essay on
“ Once more to the lake ”
Get custom paper
NEW! smart matching with writer

2. Examples of creative language: “and the gods grinning and licking their chops in the hills.” “she ran on moonlight sails.” “With a cake of soap.” “seen lily pads only from train windows”
3. “We went fishing the first morning. I felt the same damp moss covering the worms in the bait can, and saw the dragonfly alight on the tip of my rod as it hovered a few inches from the surface of the water.” The effect of the attention to detail in the first 6 paragraphs gives you the feeling that you are right there beside him.

That you are reading his diary, or watching it in a movie. Everything is given to you and little is left to the imagination but to imagine with the details handed over.

4.”There were cottages sprinkled around the shores.” “This was the background, and the life along the shore was the design.” “The one-luggers throbbed and fluttered, and the twin cylinder ones purred and purred, and that was a quiet sound, too.

5. Sight: “It was a fairly large and undisturbed lake and there were places in it that, to a child at least, seemed infinitely remote and primeval.” The secluded lake and the rare outbursts of the scenery make it seem like the lake was of a magical essence, sureal in its sense of peace. Sound: “The one luluggers throbbed and fluttered, and the twin-cylinder ones purred and purred, and that was a quiet sound, too.” The sense of sound is described to the reader, and every reader can imagine it differently. It makes it more realatable to the reader since he uses examples every person can understand. Touch/Feel: “I watched him, his hard little body, skinny and bare, saw him wince slightly as he pulled up around his vitals the small, soggy, icy garnment. As he buckled the swollen belt, suddenly my groin felt the chill of death.” It talks of the familiar feeling of icy doom when putting on still-wet swimming suits. Most of everyone knows of the feeling, and it again adds to the personable feel of the story. Taste: “There was a choice of pie for dessert, and one was blueberry and one was apple…” We’re given the flavors of the pie, but in reality we most likely thought of the flavors ourselves, because of the common aspect of blueberry or apple pie. Smell: “the smell of the swamp drift in through the rusty screens.” It talks about the smell in a way that even the most negative connotation (like rust) can feel nostalgia and joy.

6. Paragraph 10 describes the peace and utter tranquility in the lake and surrounding atmosphere. It ebbs and flows along with the water as much as it does into our minds, the almost picture-esque paragraph with audio to go along with it.

7. The specifity of paragraph 11 is very meticulous. He gives us the vision, the sound on purpose. He is trying to appeal to ethos and pathos so as to give us the experience as well. He provides specific details so that the reader can feel apart of the memory.

8. The paragraph’s last sentence began with “And” to add as an almost after thought to the prior list of campers. It shows the seperation of the campers (everyone getting drenched in the rain while swimming) and the the “comedian” whom comes into the lake with an umbrella to save themselves from the rain. It’s a very silly thought, and to us as readers it can show the character of everyone there.

9. The final image of the essay given is the son putting on wet, cold swim trunks. And just as how the author imagined himself in his son, we can imagine ourselves as his son. Trying to bear the cold, clinging cloth as you re-dress. It brings back an almost child-like action, which was once done before.

10. The author uses the word “And” around 130-140 times throughout the essay. The word acts connective in nature, we’re going through the man’s memories so there are so many details to add and feelings to feel. It’s indecisive and exactly as you would expect a verbal recounting of a memory, a story of the past. It makes the essay feel that much more of a story from someone you know. 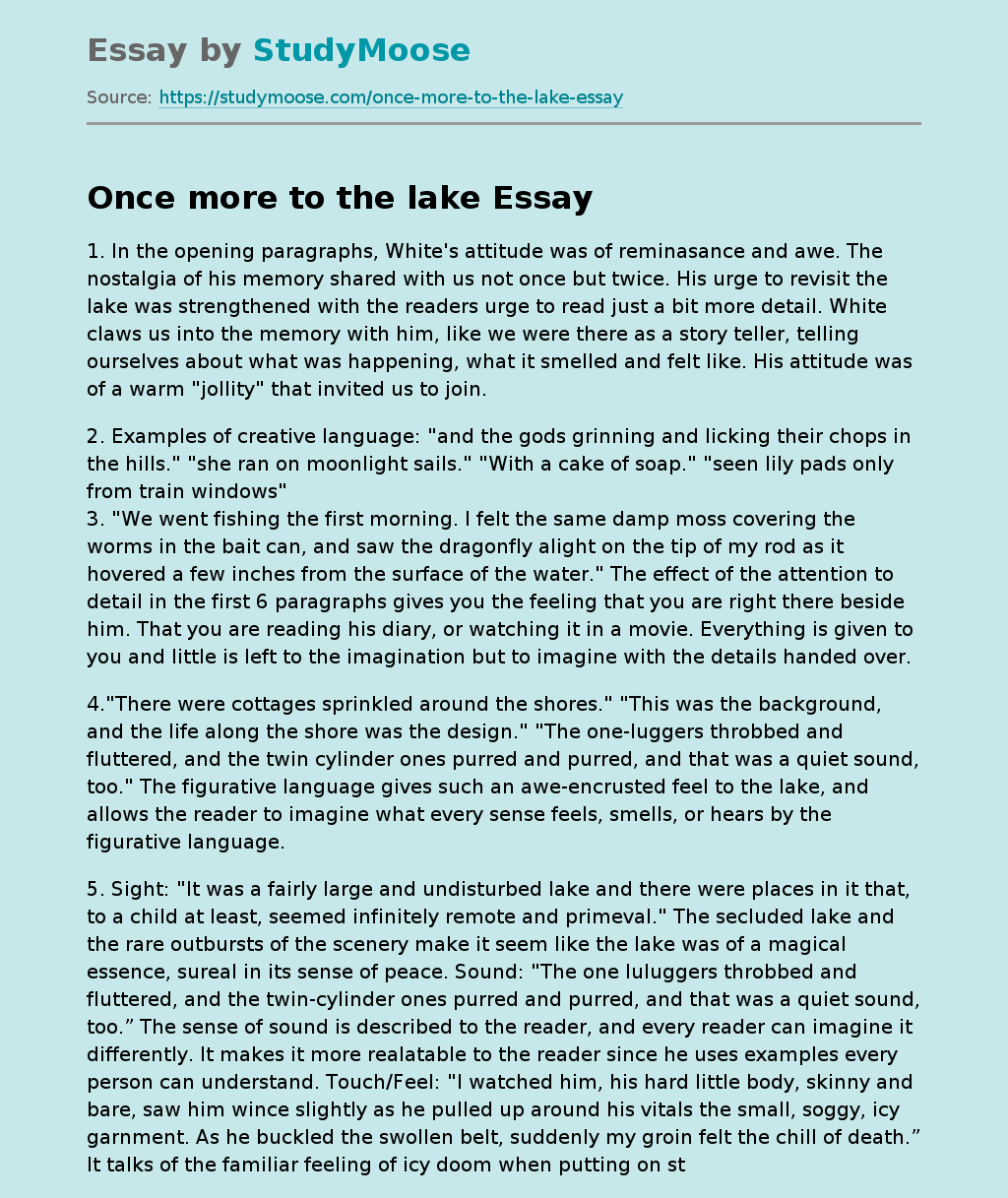