"Once More to the Lake" read through analysis

“Time has been transformed, and we have changed; it has advanced and set us in motion; it has unveiled its face, inspiring us with bewilderment and exhilaration.” -Kahlil Gibran, “Children of Gods, Scions of Apes” . The understanding of the passage of time is the main theme in the essay of “Once More to the Lake” by E.B. White. The essay is a story of White and his son revisiting his childhood vacationing spot and how the passage of time since his previous visits has a relentless hold on him as White comes to accept his own mortality.

Don't use plagiarized sources. Get your custom essay on
“ “Once More to the Lake” read through analysis ”
Get custom paper
NEW! smart matching with writer

White uses literary techniques such as imagery, metaphor, and tone to illustrate the comparison of the lake as he remembers it as a boy to the subtle changes it has faced since he has been away. White often describes recent experiences and then relates them closely to his past experiences which bring up seemingly forgotten old memories he had not known he could remember.

His use of these comparisons contributes to this essay’s theme of embracing the passage of time and the ability to comprehend one’s own mortality.

On the way to the lake, White wonders how the lake would be different; ” how time would have marred this unique, this holy spot . . .”. He was certain there would be changes as he slowly descended into detailed reminiscences of the smells of his old bedroom and the “stillness of the cathedral”. When White and his son settled into the campsite and as he heard his son sneak out to go to the shore, something White used to do, he adopted a “dual existence” and had, “by simple transposition”, become his father and his son was himself as a young boy.

The imagery used by White contributes to the comparison in the essay because it leads the reader through the entire passage with words so rich and alive the reader could feel exactly what White was feeling and in turn relate those feelings to their own experiences and fond memories.

The speaker also uses the repetitive statement that ” there had been no years”, that is, he felt he had traveled back in time to when he was a child at the lake. His tone is deep and penetrating when speaking of the fondness he has of this “utterly enchanted sea” and the appreciation and reverence he has for it being constant and unchanging as though it brought him comfort to believe that he had never grown; that he was still a young boy and, for as long as he was there, he would remain forever young.

Near the middle of the passage White speaks of how he came upon a path used by horse-drawn carriages that had had three tracks but now, with the existence of the automobile, there were only two tire tracks left and he stated that for a moment he “missed terribly the middle alternative”. It would be acceptable to think then that he would realize the change and his own reality that he was him and not his father but still he refuses to accept the idea and continues on describing the unchanging, “fade-proof lake”.

As he continues to find differences of the lake from when he had been there as a boy his tone changes. White speaks of the outboard motors and their “unfamiliar nervous sound” using words to describe them as “petulant”, “irritable” and said they “whined about one’s ears like mosquitoes”. The diction he uses in describing these dissimilarities made White sound as though the thought of having to cope with these changes was unbearable and that he was denying the fact that time had passed and he was not a young boy anymore. The sound of the new motors was the only thing that would shake his vision that his child was he and he was his father.

Lastly, White brings up the thunderstorm which symbolizes a rebirth because once the rain comes and the “return of light and hope and spirits”, he begins to look at his son and the entire trip in a different light. He then realizes, while looking around and watching the campers play in the rain, that though the children are playing the same way White used to he can make the connection that this is a new generation and not his own past. White went on to say that the joke about getting drenched in the rain was “linking the generations in a strong indestructible chain”.

Then all at once as White watches his son gather his wet, cold bathing suit to go swimming in the rain and then put it on, he suddenly feels the chill of the cold bathing suit as if he put it on himself like he once did as a young boy. He referred to the sensation as the “chill of death” because he realizes that he, like is father, is going to die, and has an involuntary acceptance of his own mortality . He had watched himself trade places with his father and watched his son take on his previous role. White’s diction, imagery and tone supported his deep-felt emotion for his precious summers and the comparison of his internal battle of how he wanted to remain a young boy at the lake and how he was unwelcome to the idea that time had continued on and he could never turn it back.

"Once More to the Lake" read through analysis. (2016, Jul 16). Retrieved from http://studymoose.com/once-more-to-the-lake-read-through-analysis-essay 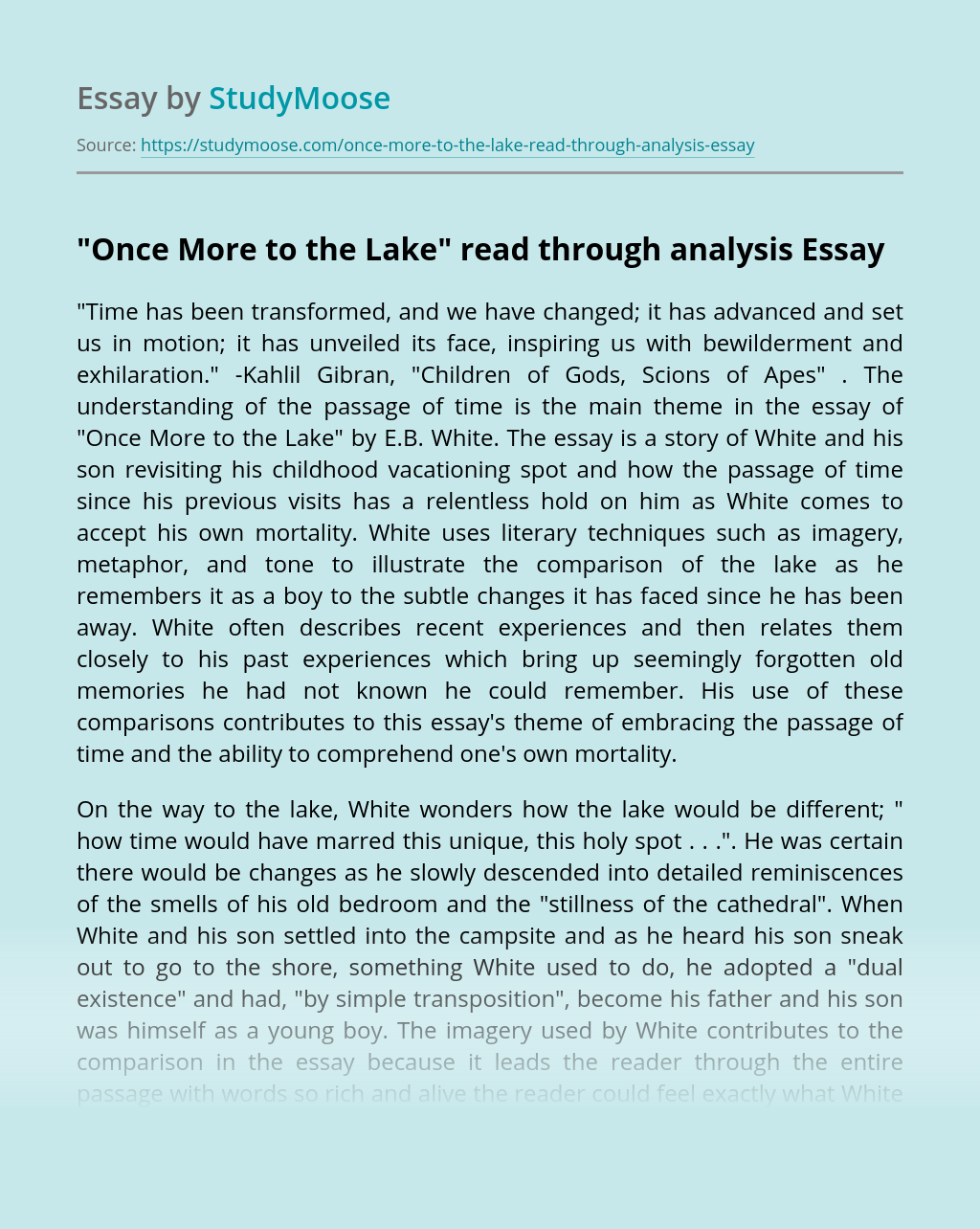