“Mother Tongue” and “Learning to Read and Write”: Compare and Contrast

The two essays “Mother Tongue” by Amy Tan and “Learning to Read and Write” by Frederick Douglass show similarities, but the differences presented between each outweigh the similarities. The essays are very descriptive of how each came to understand the English language. Tan and Douglass describe their own experiences that led to them learning English and how to read and write it. Although Frederick Douglass and Amy Tan both face obstacles in learning English, but their experiences are unique based upon their background and time in which they live, the educational advantages and disadvantages that they have, and the factors that motivate them to succeed.

Don't use plagiarized sources. Get your custom essay on
“ “Mother Tongue” and “Learning to Read and Write”: Compare and Contrast ”
Get custom paper
NEW! smart matching with writer

Neither Tan nor Douglass have family roots tied to America. Their ethnic backgrounds play a huge roll in how society views them during the time period in which their story takes place. Douglass is an African-American slave living during the 19th century. This time period in America proves to restrict Douglass from his learning due to society’s prejudices.

By contrast Amy Tan is living during the 20th and 21st century. She is free and able to receive education, but her mother does not speak English well. This results in struggles for Tan while she is at home and in school. Tan’s family originates from Asia. Her mother is fluent in Mandarin Chinese because it is her native tongue. She grows up in America with her mother, and as a child Tan learns English. She faces difficulties in school because she finds it hard to understand how the English language operates.

Her mother speaks English informally which is no help in Tan’s understanding.

Tan is constantly hearing English being spoken two ways. She hears it spoken one way at home and another way everywhere else that she goes. When she takes her English tests composed of analogies between phrases or questions concerning writing formality she becomes confused. Along with difficulties at school Tan witnesses her mother being treated as an outsider. It is evident to anyone that comes in contact with Amy Tan’s mother that she was not from America. There are many incidents throughout “Mother Tongue” where her mother is treated poorly just because she cannot speak English well. For example, Tam’s mother is at the hospital awaiting her CAT scan results to see if she might have a brain tumor only to find out the hospital has lost the results. Tan says, “She said they did not seem to have any sympathy when she told them she was anxious to know the exact diagnosis, since her husband and son both died from brain tumors. She said they would not give her any more information until the next time and she would have to make another appointment for that” . All of this affects the way Amy Tan becomes motivated to overcome her abilities to understand English and writing.

Like Amy Tan, Douglass faces many difficulties growing up, but his troubles are very different than hers. Douglass is a young slave who is illiterate, and he is limited in his abilities to learn. Visualizing the time period that Douglass grew up in is critical when trying to understand how limited he actually is as a slave. During this time period American society does not view slaves to be on the same social status as white people. Slaves are viewed as property, a possession, and they have no place in society to be educated. Douglass is fortunate in the sense that he is a house slave and he has the freedom to find ways to read and write. He could hide books or at least find some sort of literature to view. Douglass and Tan were both limited in their ability to comprehend and write English.

The process in which Douglass and Tan learn to understand the English language is similar in the sense that they face obstacles, but the obstacles and advantages that each of them have are significantly different. It is evident that the difference in time period, their backgrounds, and their abilities all play a part in how they come to learn English whether it be comprehension, writing, or speaking. For example, Tan faces the obstacle of being around English being spoken two ways, but she had the opportunity of attending school. Douglass on the other hand has the advantage of being around an English speaking family, but he faces the obstacle of not being able to go to school. Tan grows up in a different time period than Douglass. She is free and able to attend a school in order to get her education. She is not limited in her resources to learn and she has every learning aid that any other child has growing up in America. The issue with her ability to learn is the fact that she is around her mother who does not speak English formally. Tan is constantly having to translate for her mother in order for others to understand what she is trying to say. Tan witnesses her mother being treated unfairly and she has to step into the situation in order for her mother to receive the respect she deserves. All of this shows how difficult that it was for Tan to understand the way that the English language functions.

Douglass does not have the ability to attend a school in order to learn how to read and write. His mistress teaches him for a while, but that process ceases after her husband does not want Douglass to be educated. After his education is taken away, he is not allowed to read anything: “Nothing seemed to make her more angry than to see me with a newspaper” . Douglass has to find ways to receive education because he is not provided any resources. He makes a plan to make friends with the little white boys that live near him. Douglass carries bread with him while he is out of the house so he could trade the boys the bread for the knowledge of reading. Douglass emphasizes the importance of this plan by saying that “The plan which I adopted, and one by which I was most successful, was that of making friends of all the little white boys whom I met in the street. As many of these as I could, I converted into teachers” .

Douglass practices what he has learned by hiding books and reading them whenever he has free time to do so. He eventually learns how to read through this process. His process for learning to write is very similar. Douglass observes four letters that are written on the lumber for building ships F, A, S, L, but he has no clue what they are until later in his life. The lumber is marked as either “L.F.”, “S.A.”, “S.F.”, or “L.A.”. The letters’ meanings are the position of the ship that the lumber is intended to be placed. For example “S.F.” is meant for the starboard forward side. Douglass takes these letters and challenges any boy he could find that he knows more letters than him. He keeps gathering letters by repeating this process. The boys obviously know more letters than Douglass, but over time he becomes better equipped with his arsenal of letters. He takes what he learns and copies his master’s writings in copying books and practices writing until he can write just as well as Mr. Hugh. Both Tam and Douglass have to overcome obstacles in order to better understand English, but their difficulties were different which makes their learning process unique.

Tan and Douglass both face inequality due to their race and ethnicity which motivates them to succeed, but their reason to succeed is different. American society treats them differently because of prejudices. Douglass knew he was not going to be given an education so he finds another path in order to gain it. Tan knows her situation is unfair. She sees the way her mother is treated which drives her towards understanding English. Tan faces inequality because she is an Asian American child. Her mother is treated poorly because she cannot speak standard English. Tan experiences how hard it is to grow up in a home that speaks informal English. She also explains how she sees other Asian American kids going into math related fields simply because they can not understand English as well as others. It is like society places her in a box limiting her because her and her mother are different.

Douglass lives during a dark time in American history. He faces troubles that nobody should have to face. He is automatically born into having no rights simply based on the color of his skin. Because he is born into slavery he does not have equal opportunities to get an education as a child. Douglass is provided minimal education which is taken away when his master ceases his learning. The society of the American south at this time has the mindset that only white people are to be educated. It is considered to be a crime to educate a slave. Douglass should not have to face this issue, but it is his reality. Douglass has to struggle in order to learn the English language.

In conclusion, the differences outweigh the similarities in “Mother Tongue” and “Learning to Read and Write”. Each story tells about the authors’ experiences through difficulties, and how they come to learn English by overcoming the obstacles that they face. Tan and Douglass are living during two different time periods, and they come from two different backgrounds. The obstacles that each of them face are different due to those factors. Tan and Douglass face different inequalities because of their situations. They find motivation to succeed out of this. Each essay shows in a different way how society is prejudice. Nobody should face inequality for any reason.

“Mother Tongue” and “Learning to Read and Write”: Compare and Contrast. (2021, Apr 26). Retrieved from https://studymoose.com/mother-tongue-and-learning-to-read-and-write-compare-and-contrast-essay 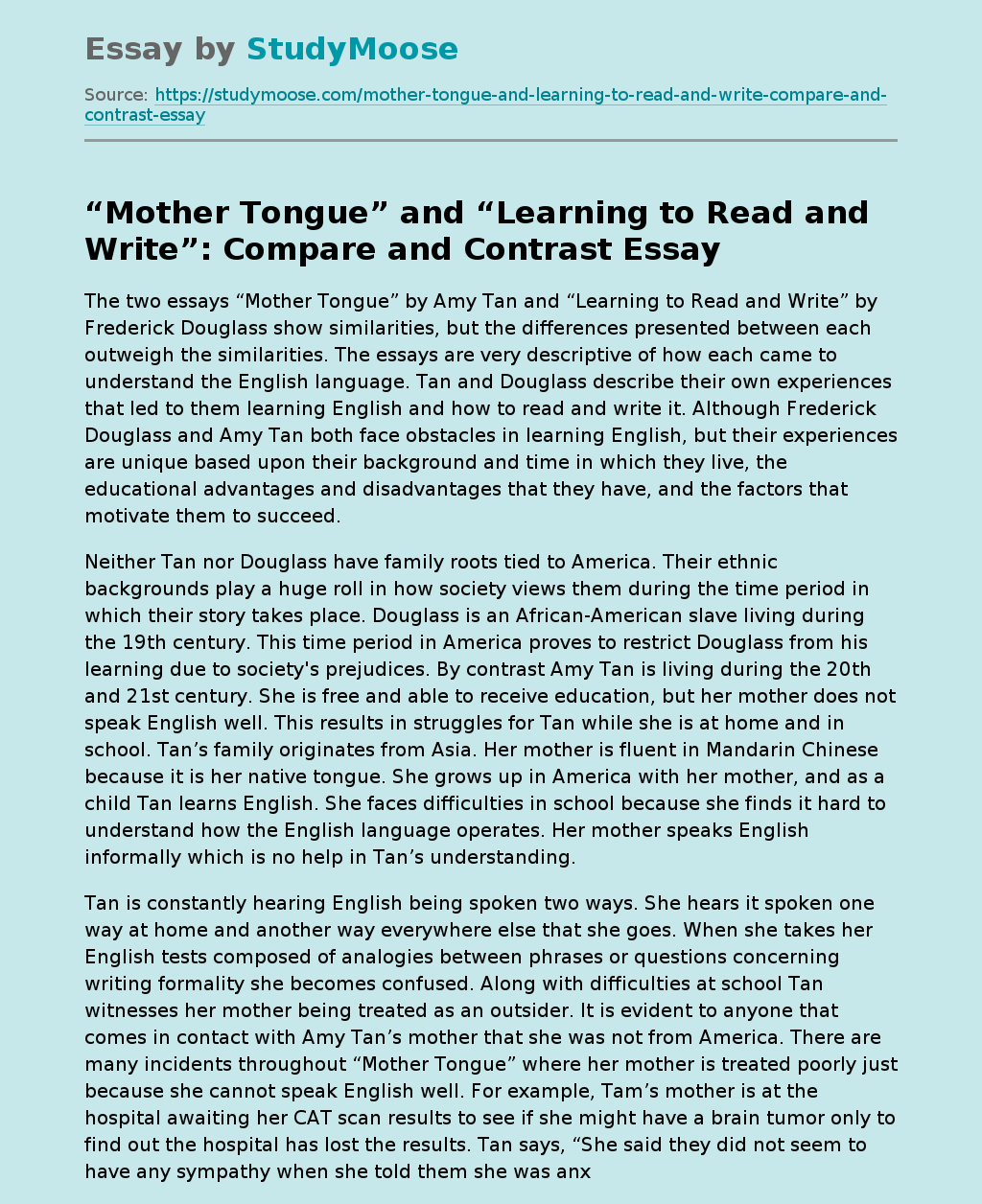