Irony in Nadine Gordimer’s “Once upon a time”

Once Upon a Social Issue Fairy tales have always been told to us as children; whether to comfort or entertain us, they always seem to be a part of everyone’s childhood. “Once Upon A Time”, the title is a characteristic of a fairy tale, but she leads the story to an ending that is anything other than “happily ever after” (Gordimer 12). Although Nadine Gordimer’s title is typical in a fairy tale in the story “One upon a time”, the story she writes is anything but typical.

Don't use plagiarized sources. Get your custom essay on
“ Irony in Nadine Gordimer’s “Once upon a time” ”
Get custom paper
NEW! smart matching with writer

Instead of dealing with characteristics and synonymous with fairy tales, the author uses irony to reflect the idea of humans leading into their destruction. Because the story about the happy family is as far away from a fairy story as it can be. She uses sentences as “living happily ever after”, the title “Once upon a Time” and words like +witch” (Gordimer 12) to imitate a story for children, but this is not a fairytale.

This is a story about the social injustices between people and the injustices in which we see in the world.

Gordimer is not trying to write a story for children. She uses the fairytale-like language to clarify the irony in the story. One of the more interesting examples of irony I found in the text was where the author wrote “Consult DRAGON’S TEETH The People For Total Security… One evening, the mother read the little boy to sleep with a fairy story from the book the wise old witch had given him at Christmas.

Next day he pretended to be the Prince who braves the terrible thicket of thorns to enter the palace and kiss the Sleeping Beauty back to life: He dragged a ladder to the wall, the shining coiled tunnel was just wide enough for his little body to creep in, and with the first fixing of its razor teeth in his knees and hands and head he screamed and struggled deeper into its tangle. The trusted housemaid and the itinerant gardener, whose ‘day’ it was, came running, the first to see and to scream with him, and the itinerant gardener tore his hands trying to get at the little boy”.

When it says “DRAGON’S TEETH” it reminds me of a fairy tale. Usually in fairy tales The story involves an upper class woman, generally a princess or similar high-ranking nobility, saved from a dragon, either a literal dragon or a similar danger, by the hero (in this case the little boy pretending to be a prince). After the mom reads the boy a story of saving the princess through thorns, which in this case is the barb wire from the company “DRAGON’S TEETH” (Gordimer 14) the boy kisses the girl and brings her back to life. This fairy tale is ironic because usually fairy tales end happily while this fairy tale is a more realistic fairy tale. The story’s first paragraph starts with family existing by a man, his wife, their grandmother, and their son. They live in the suburb, in a city, in South Africa under the apartheid system.

The separation between blacks and whites are huge, and every family in the suburb is secured in any possible way. No one from the outside is allowed in. Even though the husband keeps telling his wife that “these people were not allowed into the suburb except as reliable housemaids and gardeners, so there was nothing to fear” (Gordimer 12), the family keeps developing their safety equipment, in case something could happened. The irony is that the family has no idea what is happening outside the fence. They call them “these people” (Gordimer 12) as if they don’t even know that they look like. Gradually they add more protection to their home as their fear grows.

Ironically, the protection they install boomerangs back and kills their son. The story’s second paragraph also portrays a perfect family taking all the normal precautions to keep them safe. “It was not possible to insure the house…against riot damage”(Gordimer 12) tells us that they were not able to protect themselves from everything and the repetition of “YOU HAVE BEEN WARNED” (Gordimer 12) tells readers that this story is in fact warning them that with each move they make they build their own prison and bring on their own destruction.

As well as the sign “YOU HAVE BEEN WARNED” wasn’t just ironic but also has significance of foreshadowing by making an effort to continue to make their house safe, they brought it upon themselves that such misfortune should happen. There is also a mention of an intruder on the sign. By the end of the story, we realize this intruder does not have to be a person at all but could be an internal intruder in our lives. In the case of this family, the intruder is their inability to pay attention to the important things in life and just barricade themselves from others. Irony adds to this final effect in that everything the parents do to protect their home becomes useless. The gate speaker is used by the boy as a walkie-talkie. The alarm is set off but no one cares. The high wall is mocked by the cat jumping over it. The ultimate destruction of this is their own son’s death. In the story, “happily ever after” (Gordimer 12) is constantly repeated which is ironic because they live in an injust society.

This family is forced to keep to their own house and be scared for their lives, yet they are living “happily ever after”. The fact that the housemaid is the loyal one in the story is also ironic because stereotypically house workers are deceitful and try to steal their employer’s belongings as well as the housemaid is weeping and crying while the parents show no emotion. The biggest irony of “Once Upon a Time” is the child getting hurt by what was to protect him, especially since bed time stories and fairy tales are supposed to end happily.

In conclusion, the most important element in the story is irony, which is used to reflect the idea of humans leading into their own destruction. And although this story seems to be a fairy tale, Gordimer makes it so that the irony leads to a completely different perspective on the story. Keeping in mind all these precautions/things the characters thought they would die without, bring on terrible misfortune, where the theme sends a very powerful message as well. In reality, many people are obsessed with protection and security. While they forget that being too paranoid can result in danger.

Irony in Nadine Gordimer’s “Once upon a time”. (2016, Oct 06). Retrieved from http://studymoose.com/irony-in-nadine-gordimers-once-upon-a-time-essay 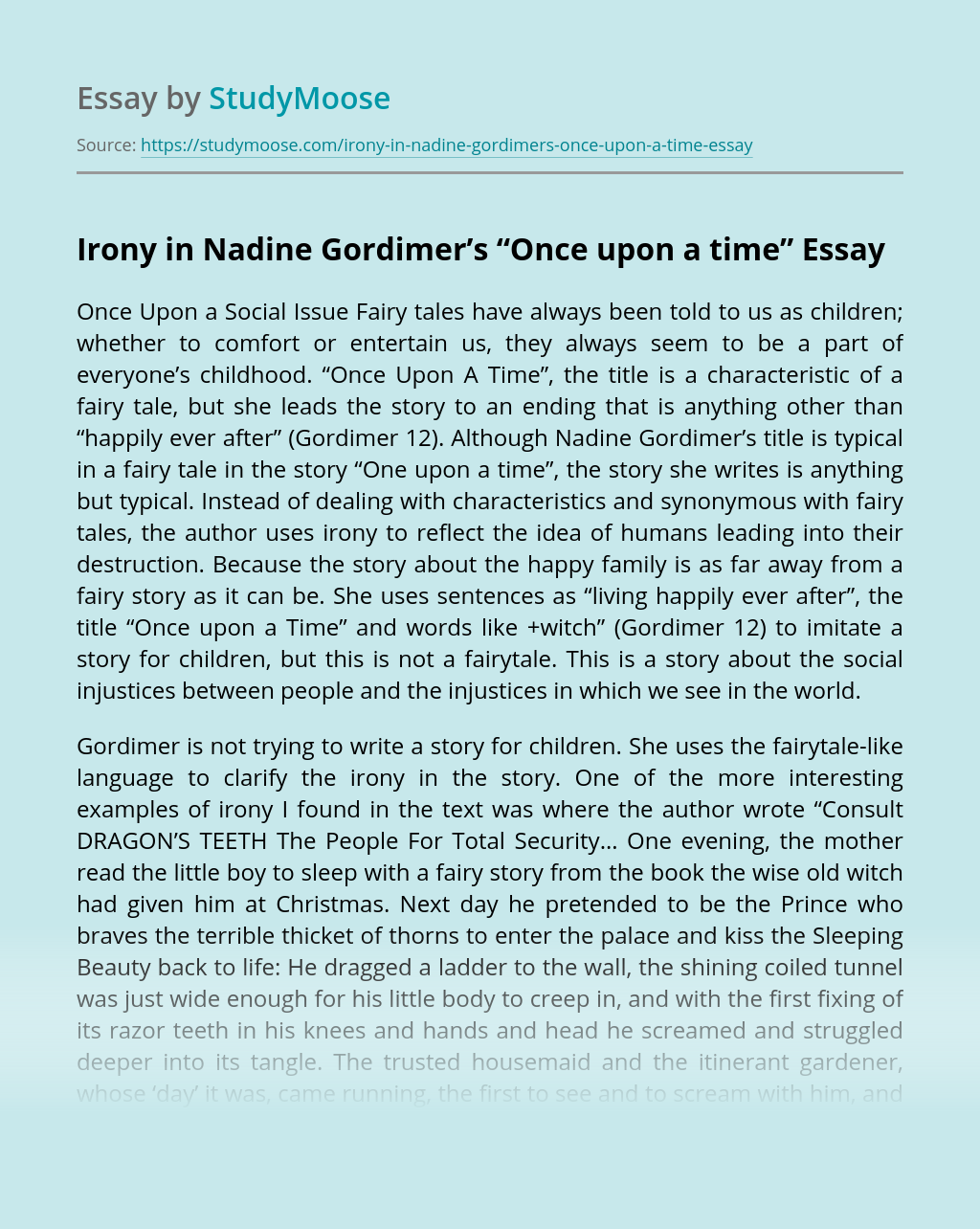