Once Upon a Time Nadine Gordimer

In Nadine Gordimer’s “Once Upon a Time”, Gordimer discusses the consequences of the family’s actions due to paranoia of the outside world. In the extract, Gordimer paints a picture of how the couple had taken extreme measures, erecting physical barriers around them to protect themselves from the purported dangers of their external environment, until they are unaware about the dangers that these barriers pose to themselves.

Hence, the extract underlines the dangers that prejudice poses for oneself and the futility of trying to protect oneself from the infinite dangers lurking.

Don't use plagiarized sources. Get your custom essay on
“ Once Upon a Time Nadine Gordimer ”
Get custom paper
NEW! smart matching with writer

In the above extract, Gordimer employs the use of the third person narrative, which “reveals the thoughts of the family members”. The reader is allowed a bird’s eye view into the reasons why safety was paramount to the couple and the measures taken by them to keep their house safe. Also, with the third person narrative, details that foreshadow the grisly fate awaiting the little boy are made more apparent.

Moreover, without any names pegged to the characters, Gordimer leads the reader to believe that the incident seems typical, which conversely allows the reader to be provoked into a stronger reaction towards the devasting effects that prejudice brings and the possibility that it can happen to almost anyone. Therefore, with the third person narrative, Gordimer not only manages to invoke the reader’s incredulity towards the extreme measures taken by the family in protecting themselves, but also foreshadows the unhappy ending for a supposed fairytale. The purposeful omission of the boy at the start of Gordimer’s narration in the above extract foreshadows that the boy would not be living “happily ever after”.

The story’s structure is a reversal of a classic fairytale’s structure, by stating that “a man and his wife who loved each other very much and were living happily ever after” at the beginning. The story begins with the premise that the couple is living happily ever after, but only introduces their child later, which breaks the conventional fairytale’s structure, foreshadowing an unhappy ending. Thus, Gordimer foreshadows that the boy was unable to live happily at the end of the story with a reversed fairytale’s structure and the deliberate separation of the boy from his parents. Gordimer also makes use of imagery and irony to emphasise the extreme prejudice that the family harbours and the effects of prejudice that they would later experience. In the extract, the plaque to deter intruders had “the silhouette of a would-be intruder” which “was masked” which “therefore proved the property owner was no racist” as one could not tell if the would-be intruder “was black or white” .

The image of a silhouette already conjures up a black person in one’s mind, which adds an ironic element when one continues reading that “people of another colour were quartered” and “not allowed into the suburb” . The colour of a silhouette has one linking the intruder with black people as it is dark. This further adds on to the irony with the panic that the wife experiences that the black people might “open the gates and stream in”, as the family was concerned about protecting themselves from people who were already barred from their suburb merely due to their race. One could not tell a person’s race merely from a silhouette, which emphasises how narrow-minded and racially biased the community is. Thus, Gordimer points out the absurdity of actions carried out due to a person’s racist outlook and foretells the disastrous consequences in store for the family. Gordimer also uses diction to convey the absurdity of the protective measures as taken by the family.

She writes that anyone who “tried to open the gates” and “pulled off the sign” is oddly required to “announce his intentions” with the installation of gates meant to keep intruders out. With the word “announce”, Gordimer highlights the futility of the security measures taken by the family, because no intruder will request for permission to break in and underlines the ludicrousness of trying to be protected from intruders. The irony is that the intruder is now depicted as a civilized individual who would await permission before intruding. Additionally, the gates were meant to keep intruders at bay, not to serve as a warning to the family before the house was broken into. Thus, Gordimer allows the reader to rethink the effectiveness of the security measures employed by the family and the futility of such measures, as one cannot prevent someone who just wants to break in.

Once Upon a Time Nadine Gordimer. (2016, Apr 20). Retrieved from http://studymoose.com/once-upon-a-time-nadine-gordimer-essay 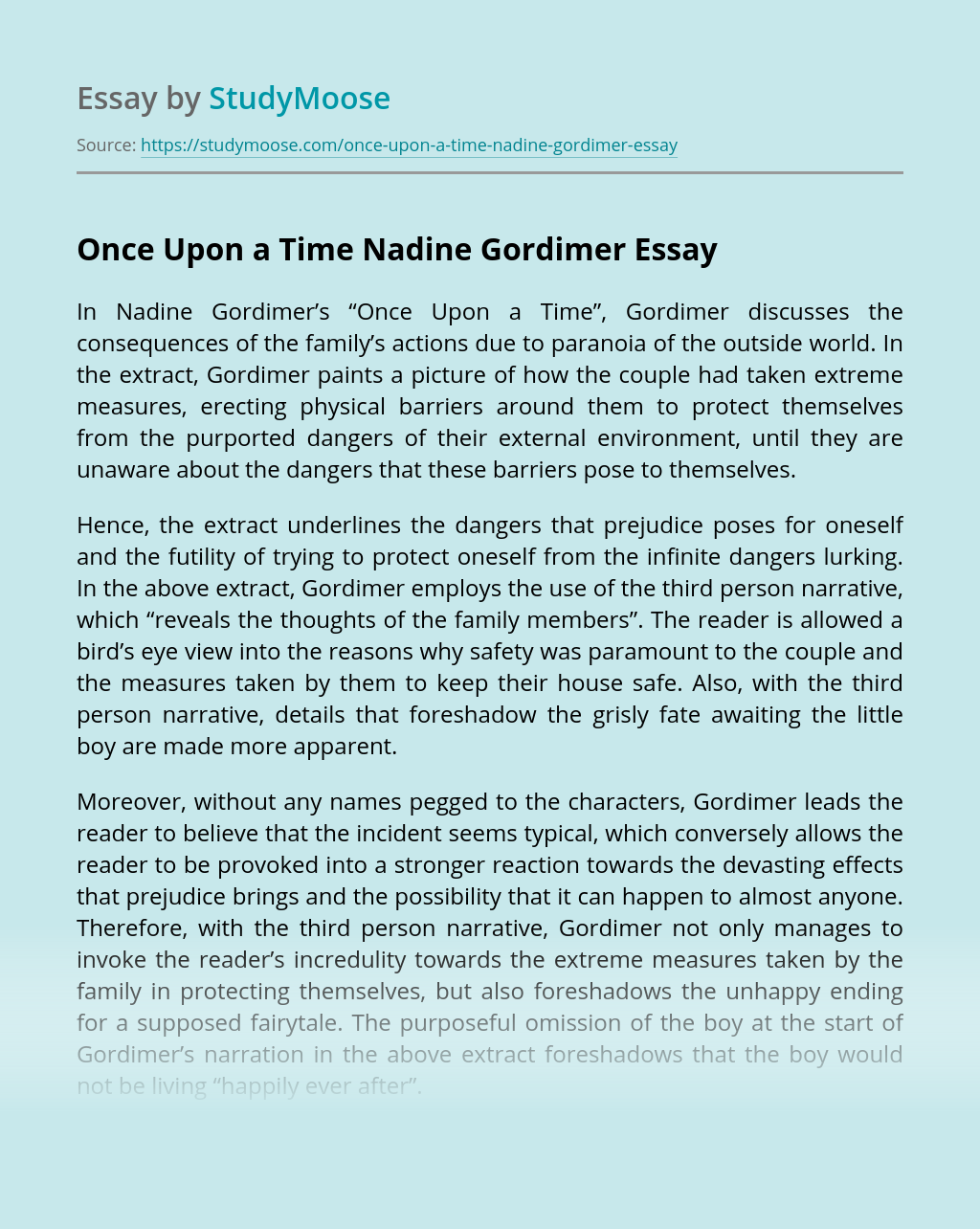