Two Brother In “A Brother’s Murder” by Brent Staples

In “A Brother’s Murder” by Brent Staples, found in Evergreen text book Brent Staples write’s about his younger brother, Blake, who took a very different path in life than his brother Brent did. In the beginning of the essay Brent writes that he receives a phone call that Blake has been murdered by being shot six times by a former – friend. The choices Blake Staples and his perception on life is what led to his death. It was just a matter of time before Blake either was to kill or be killed.

Turn in your highest-quality paper
Get a qualified writer to help you with
“ Two Brother In “A Brother’s Murder” by Brent Staples ”
Get high-quality paper
NEW! AI matching with writer

The essay goes on to tell about the conditions in which Blake grew up. The neighborhood in which the brothers lived was violent, and young men grew into having a street life persona. Through-out Blake’s life he witnessed many situations caused by violence. Brent recalls a conversation he overheard there between two Vietnam veterans, in which one of them said how much he preferred to fight with young men from the inner city, who wear “their manhood on their sleeves.

“They weren’t afraid to fight, believing that violence proved they were real men. Brent and Blake moved away from their home in Chester, Pennsylvania to escape the environment filled with violence and poverty. Whereas Brent moved to Chicago to better himself by becoming a journalist, Blake moved to Roanoke, Virginia into the same violent and drug infested environment. Blake chose his way of life by engaging and surrounding himself in negative behaviors such as drugs, guns, and gang violence.

When Brent came home to visit his brother sees that his Blake has been transformed and now hangs out with drug dealers and gangs. When Brent went to see his brother Blake in Roanoke, Virginia Brent realized his little brother was worse than when they left Chester, Pennsylvania. When Brent notices a wound on his brother’s hand, Blake shrugs it off as “kickback from a shotgun”. That he feared for his younger brother’s life and tried to talk some sense into him. Brent offered his younger brother a ticket to leave the dangerous drug infested projects and

Blake refused never showing even though he said he would. My conclusion to this essay is that how two brother who faced the same struggles and who lived in the same environment can take two totally different paths in life by the choices that each of the individual’s take. Brent blames himself for his brother’s death feeling guilty and empty questioning himself what he could have done to prevent his brother’s murder and what if he intervened earlier offering him to leave the projects.

Two Brother In “A Brother’s Murder” by Brent Staples. (2016, Jul 20). Retrieved from https://studymoose.com/two-brother-in-a-brothers-murder-by-brent-staples-essay 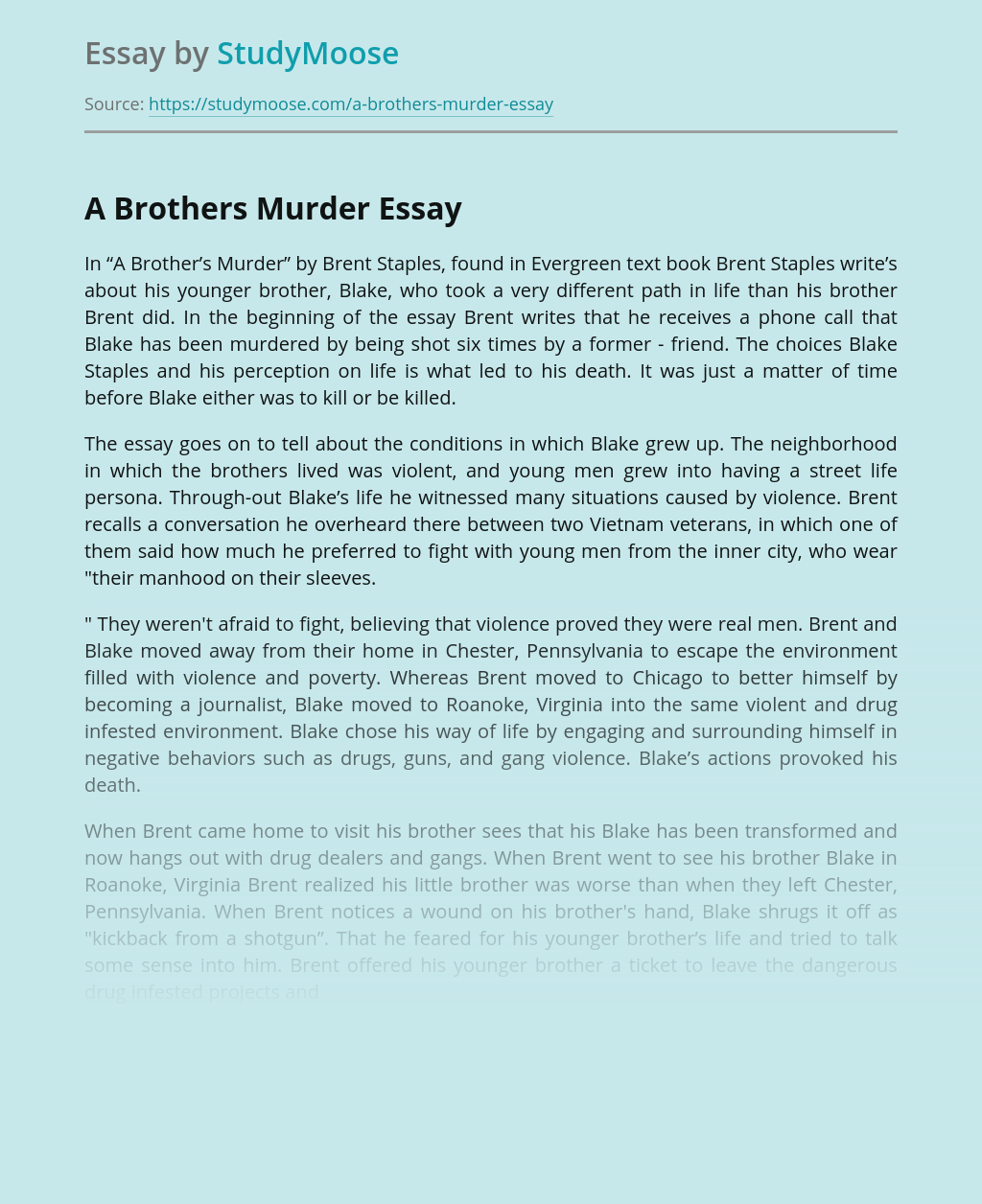 Turn in your highest-quality paper
Get a qualified writer to help you with
“ Two Brother In “A Brother’s Murder” by Brent Staples ”
Get high-quality paper
Helping students since 2015
Stay Safe, Stay Original