"A Tale of Two Cities" by Charles Dickens

A Tale of Two Cities has long been one of Charles Dickens’ most favored books. This book opens in the year 1775 by contrasting two cities: Paris, France and London, England. Throughout this story various characters are “recalled to life”, meaning that they have had a new chance at life. Dr. Manette is clearly mad after being in prison for eighteen years. When Lucie, the Dr.’s daughter, and Mr. Lorry eventually nurse the doctor back to a healthy state and out of his insane state they had “recalled him to life.

Don't use plagiarized sources. Get your custom essay on
“ “A Tale of Two Cities” by Charles Dickens ”
Get custom paper
NEW! smart matching with writer

” Dr. Manette was nursed from an insane state with no real life to a sane one with a very functional life. In doing this Lucie and Mr. Lorry, in a way, gave Dr. Manette’s life back to him or “recalled him to life.” Another instance in which someone is “recalled to life” involves Charles Darnay.

Charles Darnay is on trial for treason in England(Book 2, Ch.2-4). C.J Stryver and Sydney Carton are representing Darnay in this trial.

Sydney Carton saves Darnay from death in this trial with his miraculous wits. Through this Darnay is given another chance at life ,and therefore was “recalled to life.” The last and most significant instance of someone being “recalled to life” is found in the last chapters of this book. Sydney Carton has recently switched places with his look alike, Darnay, and is awaiting the guillotine.

” Through these words Sydney recognizes that by sacrificing his life for Darnay, a loved one of Lucie, he will be doing the best thing that he has ever done and can do. Sydney is finally satisfied with himself, he is no longer a drunken fool, but a hero that now can live or die with himself. By dying, and saving Darnay for Lucie, Sydney Carton is “recalled to life.” Throughout this book “recalled to life” has been the most important theme. Almost all of the main characters in this novel were “recalled to life.” This theme was the most important because it allowed us, the readers, to see the characters trates being used by them and to understand how much a character would do for another. When Carton represented Darnay on trial and saved his life we saw how smart Carton was.

In the last instance of “recalled to life” we saw how much Carton really felt for Lucie when he saved Lucie’s husbands life in return for his own. The theme “recalled to life” is seen throughout this novel and should be recognized as one of the most important.

"A Tale of Two Cities" by Charles Dickens. (2020, Jun 02). Retrieved from http://studymoose.com/tale-two-cities-new-essay 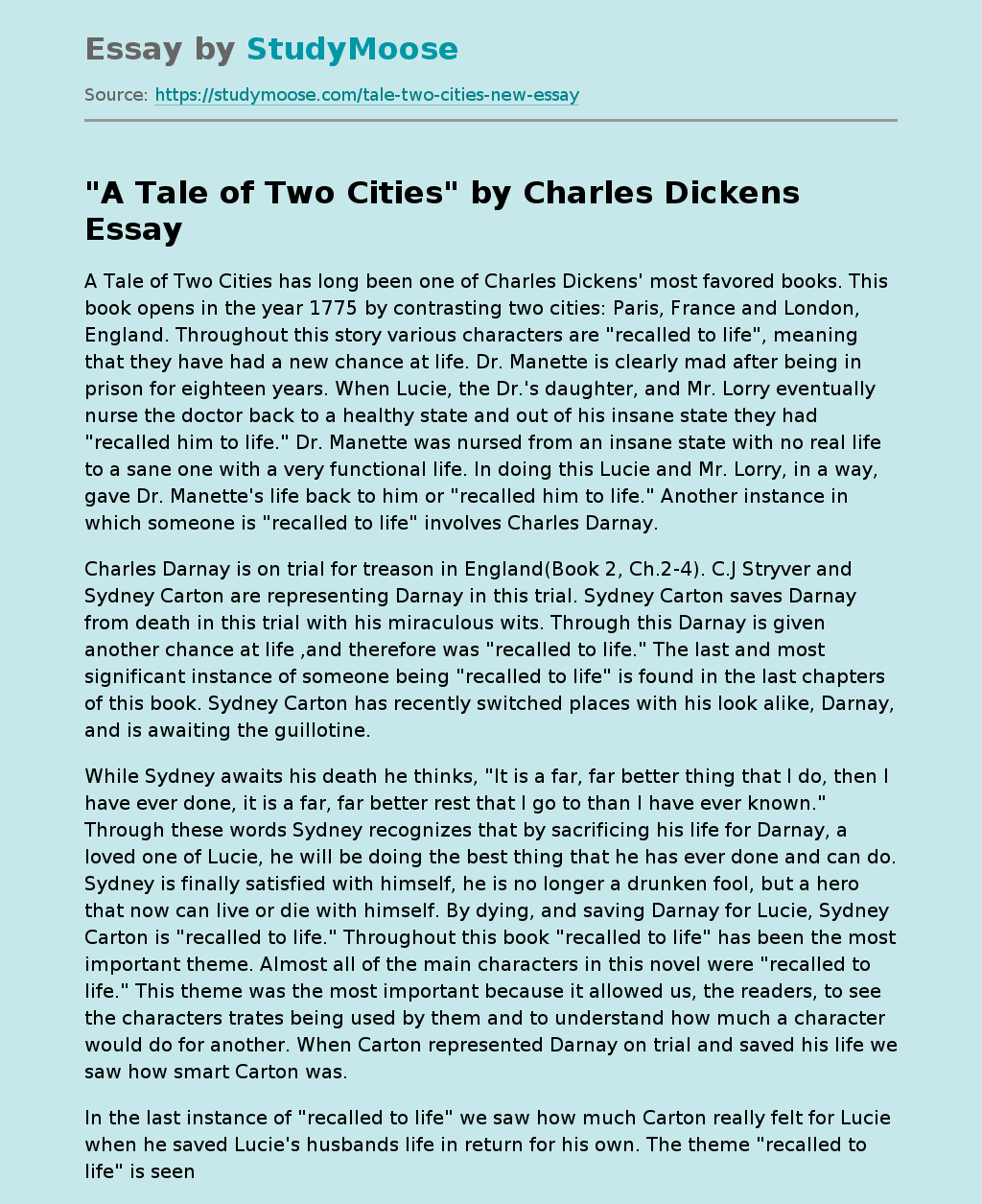