The Child's Story by Charles Dickens

The Child’s Story is one of Charles Dickens short stories which published in the mid-1800s as one of his annually Christmas short stories. I choose this story because the story has a deep meaning message, which is reflected ourselves, to the reader but the story is easy to understand. Charles Dickens is a writer and journalist from England. He was born in Landport, Portsmouth, on February 7, 1812. He left school at the age of 12, in order to work for supporting his family financial problem.

His first experiences of working in bootblack factory and living in poverty created the concerned which marked in his novel, Oliver Twist. After his family released from the financial problem, he continued his study to Wellington House Academy for two years and then he worked as a clerk in Gray’s Inn. In 1836, he was married to Catherine Hogarth until 1858 and they had 10 children. He worked as a weekly journal editor beside also wrote 15 novels, five novellas and hundreds of short stories.

He was a social criticism for issues such as poverty, children’s rights and education. He died caused by stroke on June 9, 1870 and was buried in the Poets’ Corner at Westminster Abbey. The story is about the traveler who was on a trip to nowhere. On the trip, he met a beautiful child, a handsome boy, a young man, a middle-aged gentleman, and an old man. Each person that he met had their own favorite things to do and each person always disappeared after they have finished the activities where the traveler were being asked to come along with them.

The traveler was trying to call each of them again and again after the lost but they never showed up. The meeting with the middle-aged gentleman was different than any person that he had met before because they weren’t just by themselves, in fact the gentleman had wife who later left him by himself and the traveler. The traveler, the gentleman and his wife found the gentleman’s children at the long green avenue.

There were four children who found as little figures and grew up by time until the time had arrived when their children were mature enough to choose their own way and soon after that, their children got what they wanted to do and where they wanted to go. Then it was the time for his wife to go to heaven and the lady left them both alone. Suddenly, the traveler was being left alone and he called the gentleman in vain all over again because the gentleman never showed up. Finally, he met the old man when he passed out the wood and sat next to him. Surprisingly, friends that he had met before were showed up in front of him and he realized that they were the reflection of him from time to time.

II. Analysis
A. Plot
The story has a quite simple plot to be analyzed because the arrangement of this story is chronological. The story starts with exposition where the narrator tells us about the traveler’s journey which described as magic journey. Then the rising action starts when the traveler meets a beautiful child, then he loses him. The rising action as in the situation when the traveler meets a beautiful boy repeats in the situations when the traveler met a handsome boy and a young man. He meets each of them, then he joins to do each of their favorite things together and in the end, he loses them. The traveler’s meeting with the middle aged man leads to the climax of the story. The climax starts when the middle aged man loses his three children because they grow ups and they has decided which way they want to go and what they want to reach in their life.

The traveler is a brave, friendly, and curious person because he travels by himself and he takes his risks to come along with strangers, he doesn’t afraid to go with the strangers and open up to them. The second character is the Beautiful Child who represents the images of children which cheerful and playful (…so, he played with that child, the whole day long, and they were very merry.) The third character is the Handsome Boy who represents the images of boy who full of curiosity (And the boy said, “I am always learning. Come and learn with me.”) and he is an adventurer (But, they were not always learning; they had the merriest games that ever were played.). The fourth character is the Young Man who represents the images of the man who in the phase of searching for true love which is romantic (they made it up, and sat in the dark, and wrote letters every day, and never were happy asunder, and were always looking out for one another and pretending not to, and were engaged at Christmas-time, and sat close to one another by the fire,) and flirty (Well! he was teased sometimes–just as Somebody used to be by Fanny;).

The fifth character is the Middle Aged Gentleman who represents the image of gentleman which always busy (And his answer was, “I am always busy. Come and be busy with me!”). The Middle Aged Gentleman is being left devastated because of the partings with his family that later shows him as a sensitive person. The sixth character is the Old Man who represents the image of old man which a loving (So, he loved them all, and was kind and forbearing with them all, and was always pleased to watch them all,) and nostalgic person (And the old man said with a calm smile, “I am always remembering. Come and remember with me!”).

C. Point of View
Point of view of this story is First Person. Actually, it is quite confusing to determine the point of view until we reach to the last part of the story, when the narrator says “And I think the traveler must be yourself, dear grandfather, because this is what you do to us, and what we do to you.” The last sentence reveals that the traveler is the narrator’s grandfather. D. Setting

1. Physical
The time setting for this story is the lifetime of the traveler. Every meeting’s time represents every phase of the traveler’s life. When the traveler meets the beautiful kid, the time sets in the day light (The sky was so blue, the sun was so bright,). When the traveler meets the middle aged gentleman, the time sets through the changing seasons which explains how fast time flies as an adult (The whole journey was through a wood, only it had been open and green at first, like a wood in spring; and now began to be thick and dark, like a wood in summer;). When the traveler meets the Old Man, the time sets while the sun goes down which explains that the Old Man’s life come to the end of journey (So the traveler sat down by the side of that old man, face to face with the serene sunset;). The place setting for the story starts in the dark path when he starts his journey, then he meets the Beautiful Child in the beautiful place as we can classify as a pasture side by side with a lake or a river (The sky was so blue, the sun was so bright, the water was so sparkling, the leaves were so green, the flowers were so lovely,).

When he meets the Handsome Boy and plays with him, the places that mentioned in the story are the river, on the ice, horse race and a field to play sports. The place setting when he is with the Young Man not mentioned in the story. After that he meets the Middle Aged Gentleman in the woods (The whole journey was through a wood…). When he meets the Old Man, the traveler sits beside the Old Man on the fallen tree after he passed out of the woods (…he came to an old man sitting on a fallen tree). 2. Spiritual

The author of this story makes this story as a good reflection for the readers towards life. The Author doesn’t straightforward to the message that he wants to tell, in fact he uses symbolism to the story that makes the story even more interesting because the author wants us to be more imaginative. F. Symbolism

The way that the narrator describes the beautiful nature around him (The sky was so blue, the sun was so bright, the water was so sparkling, the leaves were so green, the flowers were so lovely, and they heard such singing-birds and saw so many butterflies, that everything was beautiful.) is categorized as imagery. Personification is used in the line: “It was delightful to listen to the wind, and fancy what it said…” Simile also used in the line: “…the white flakes falling fast and thick, like down from the breasts of millions of white birds;”

G. Themes
The theme of this story is “life is a journey”. The author symbolizes life as a journey and the people are traveler. Every phases of life has its own uniqueness, happiness, problems, and lessons, but in the last phase of life, we will realize that we have learned a lot and we don’t lose them all (the beautiful memories, the people who we love) even though we think we lose it.

The Child’s Story is a good story. It is relevant to the readers and it has deep meaning towards life. The story is being delivered in casual language and chronological orders, so that’s why it is easy to understand. We must admit that Charles Dickens has the great ability to make this kind of story which fits to every types of reader. The message of the story tells us to be grateful for what we’ve been through and what will be through in the future. It is normal to lose something or someone in our life, because in the end we will thank for the lesson learned. So, we should live our life to the fullest and enjoy every phase of it.

The Child's Story by Charles Dickens. (2016, Apr 03). Retrieved from http://studymoose.com/the-childs-story-by-charles-dickens-essay 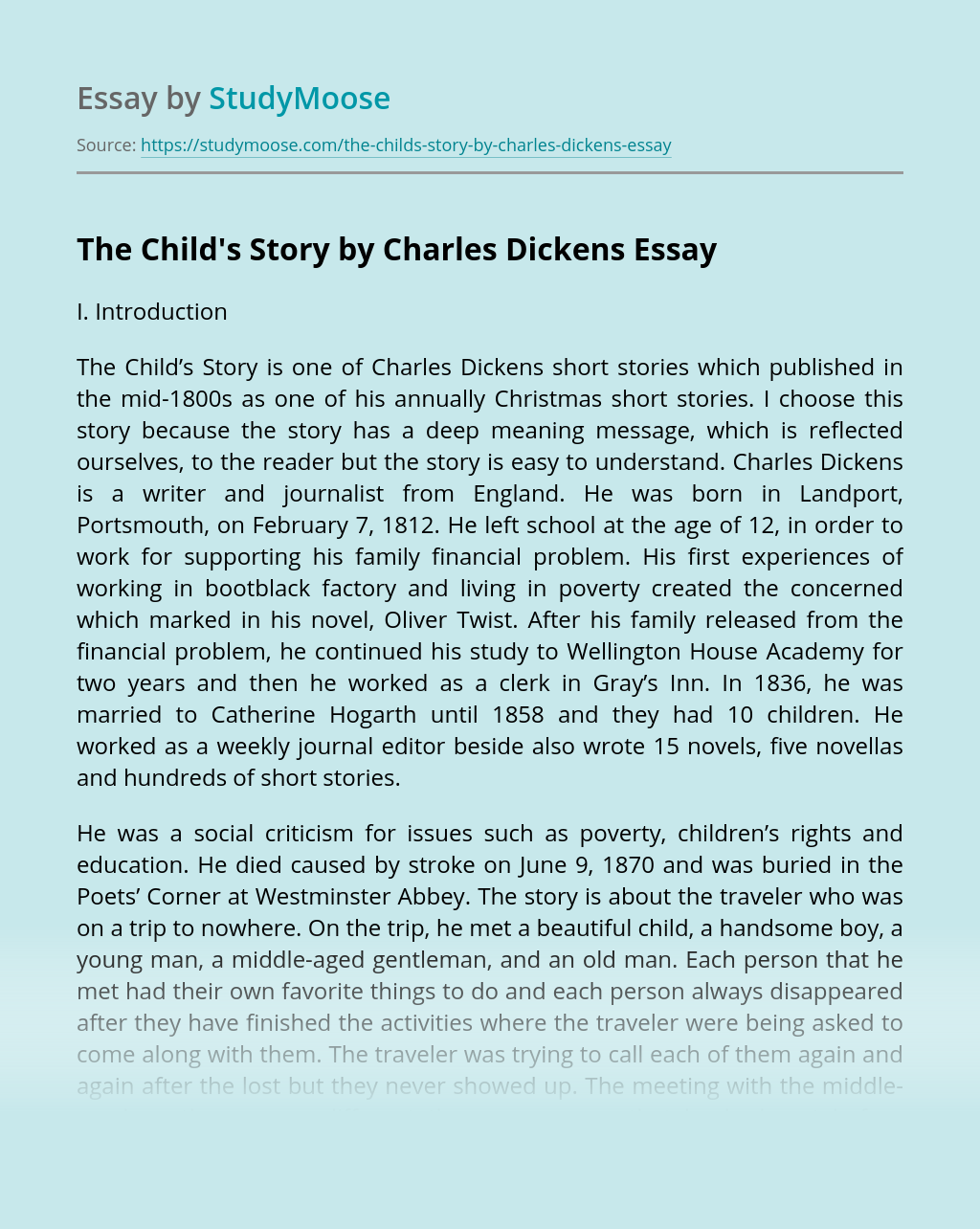 Don’t waste time
Get a verified expert to help you with The Child’s Story by Charles Dickens
Hire verified expert
$35.80 for a 2-page paper
Stay Safe, Stay Original