Discuss Dickens’ presentation of relationships between children and their parents/parental figures in ‘Great Expectations’.

Dickens uses the relationships between children and their parental figures to explore the themes of belonging, as well as status and identity.

Pip, the protagonist of the novel, has been identified as an orphan and never saw either of his parents. Instantly, this gives the reader an idea that Pip did not belong to a typical and perfect family and never had his actual parents look after him or contribute to his upbringing.

Don't use plagiarized sources. Get your custom essay on
“ Parental and Child Relationships in Great Expectations ”
Get custom paper
NEW! smart matching with writer

We are told that instead, his sister brought him up ‘by hand’. This phrase has been used by Dickens repetitively in the novel in linking the two siblings together; the idea that it is emphasised may imply that Pip should in fact be grateful to his sister as she provided him with all that he needed, and that she has a certain power over him. Although they live in the same house and belong to the same family, Pip was aware that his sister was hugely superior to him and he ‘had no hope of deliverance through his (my) all powerful sister’.

It is evident that although she acts as a motherly figure towards him, she possesses all the attributes of a scornful mother and does not allow Pip to forget that he owes his existence to her. It is also evident that she herself did not wish to bring him and ‘repulsed him (me) at every turn’. The description of Mrs.Joe as having a ‘hard and heavy hand’ and ‘laying it on her husband as well as upon me’, along with Pip’s description of her spreading butter on the bread in an ‘apothecary kind of way’ with aggressive verbs such as ‘slapping dexterity, sawed, and hewed’ tells the reader a great deal about her nature; in the household, she played the role of a man and an aggressive figure.

The word choices also makes it clear that Pip thought of her as an almost intimidating figure in his life, despite Mrs.Joe being his sister and playing the role of his mother. Simply by the fact that he calls his own sister ‘Mrs.Joe’, it is clear that their relationship is very formal and is not built on any emotional basis. All these factors contribute to the understanding that Pip has a very disjointed family life and never belonged to an ideal household or had a much needed motherly figure as such present in his life.

However, despite Pip’s relationship with his sister which was solely based on responsibility, he had a very positive relation with his brother-in-law, who consequently acted as a father to him. Dickens has uses juxtaposition of Joe to his wife to emphasise the difference in their characters and the way in which Pip views them. He describes Joe as a ‘mild, good natured, sweet-tempered, easy going, foolish dear fellow’, accentuating the good qualities Joe has and how well he thinks of him as opposed to his sister. Joe fulfils the role of a father for Pip in several ways and during the entirety of his life. In the first stages of Pip’s childhood, Joe protected him as much as he could from the wrath of his wife and tried to aid him in becoming a well mannered and respected young gentleman.

Despite how Pip has treated him in his later life, Joe still remained with him and respected him as much; even after he had ‘turned to the worst point of his (my) illness, he (I) began to notice that while all its other features changed, this one consistent feature did not change’. Pip also describes Joe’s ‘tenderness’, despite his job as a blacksmith, ‘was so beautifully proportioned to his (my) needs, that he (I) was like a child in his hands’. This proves that Joe fully recognised his responsibility as a parental figure in Pip’s life and did everything he could to fulfil it, in comparison to his wife who felt that Pip was simply a burden in her life.

Joe is also a character that Pip loves greatly. In chapter six, Pip says “But I loved Joe… because the dear fellow let me love him”. This shows that in Pip’s early childhood, Joe is seen as an equal. This is most likely because both Joe and Pip suffer through the pain inflicted by Mrs Joe, and Joe is the only character in the book that shows love and affection for Pip. This can be observed in chapter seven, when Pip reveals “I had a new sensation of feeling conscious that I was looking up to Joe in my heart.” These quotations suggest that maybe Pip looks up to Joe and that Joe is Pip’s comrade and confidant. Pip also ‘treated him as a larger species of child, and as no more than my equal’; although this shows that they were both equal, it can be implied that Pip showed no respect for Joe in his fatherly figure.

Pip had another fatherly figure in his life, through Magwitch. Upon discovering that Magwitch is his secret benefactor, Pip feels far from ecstatic. He had tried to forget the acts he committed as a young boy by aiding the convict in the marshes, and his conscience almost seems clear, before Magwitch re-enters Pip’s life. Although Pip’s becoming a gentleman may never have been possible without Magwitch’s generosity, he almost appears offended by the behaviour of his benefactor. Magwitch, on the other hand, is delighted to reveal himself to Pip, and states himself to be his ‘second father’; the way he ‘put away money, only for Pip (you) to spend’ and spent a very long time in attempting to ensure Pip’s position as a gentleman.

The way Magwitch addresses Pip maked it obvious that he considers Pip to be his son, the son he never had; he has worked hard and escaped, risking his life to better that of Pip. However, Pip seems frustrated by this act Magwitch has committed. Most of his frustration seems to be because ‘it was for the convict,[…], that i had deserted Joe’. At this point he realises that he abandoned Joe in order to achieve his own selfish dreams of living amongst the upper classes and improving his position in society. Due to this abandonment, Magwitch begins to fill the void of a fatherly figure in Pip’s life, although he did so against Pip’s will in the beginning. It may also be implied that although Magwitch did become like a father to Pip due to being his benefactor, he did so for his own benefit and for the satisfaction of ‘owning’ someone who had achieved so much in life.

She does not like having the responsibility of Pip, and Pip is left to deal with her anger. Joe and Magwitch on the other hand, protect and help Pip in his life due to the love and respect they have for him, despite not being related to him directly. Joe is also the only character who stays faithful to Pip the entire time, despite not sharing a birth relationship with him. This emphasises the theme of belonging and goes to show that through these relationships, Dickens has put across the idea that relationships built on love, respect and commitment are worth more than blood relationships in general. 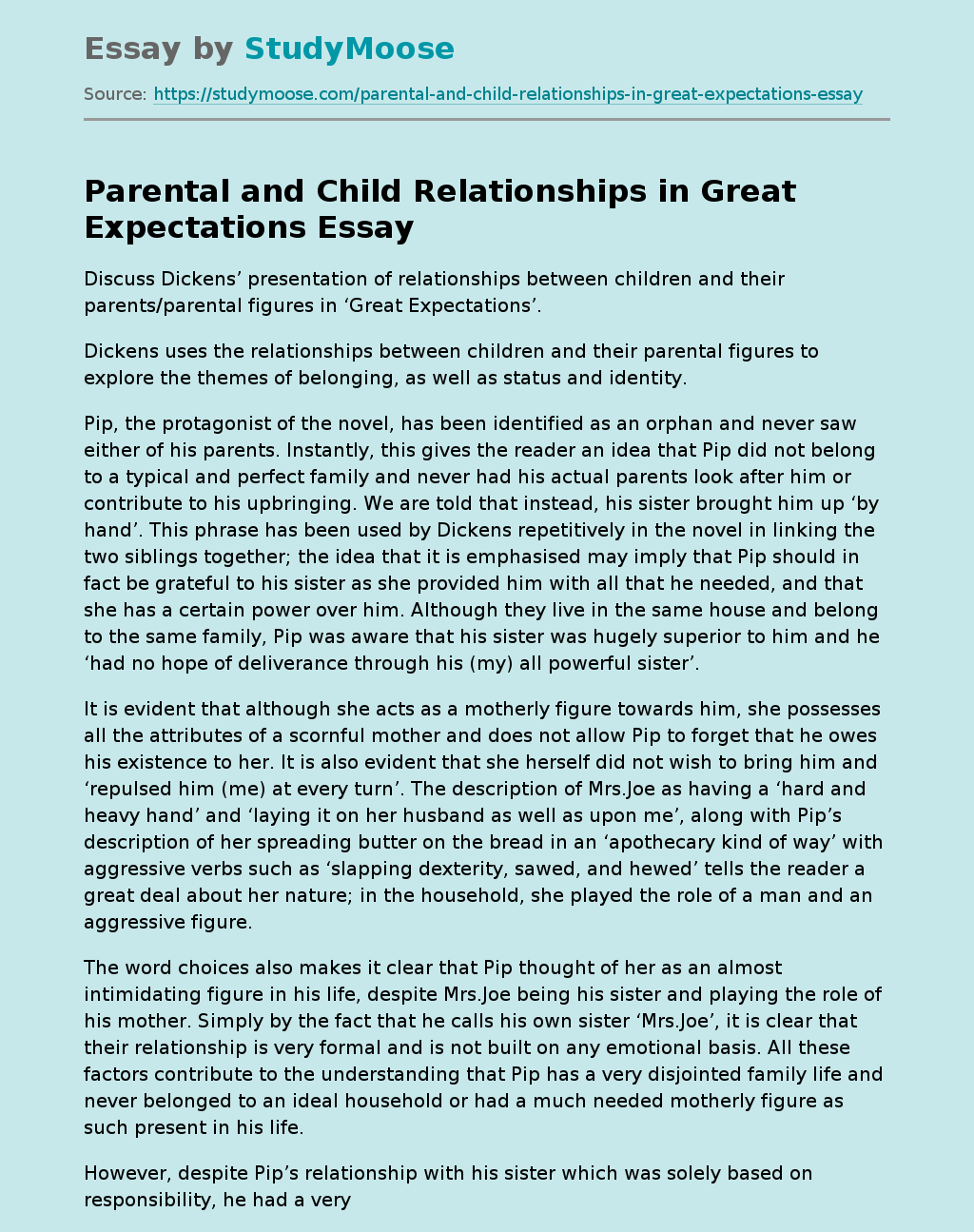