In his novel, Oliver Twist, Charles Dickens narrates a classical story (in a true life experience manner) of a mistreated Orphan, named Oliver Twist. The story unfolds the adventure of Oliver Twist who lost both parents at a very tender age and thus lost his chances of decent living. His mother died at childbirth, while his father was conspicuously absent in his life from the beginning. He spent his tender years in a far away “babyfarm”, where children were giving little or no care and treated with contempt.

Don't use plagiarized sources. Get your custom essay on
“ Oliver Twist by Charles Dickens ”
Get custom paper
NEW! smart matching with writer

“You needn’t mind sending up to me, if the child cries, nurse,” said the surgeon, putting on his gloves with great deliberation. “It’s very likely it will .. ” Oliver Twist went from one sordid experience to another till providence eventually brought him face to face with his true identity and his heritage. In the end, he was adopted by a decent family and was bestowed a decent living he never had and had always dreamed of.

When he was just nine years old, he was sent to the workhouse (the same place his mother had died while giving birth to him), where he met with unbearable hardship.

It was the tradition of the workhouse to starve orphans, giving them just about enough to keep them alive. The staffs were not only insensitive to the needs of these orphans, they were also cruel to them. So when Oliver Twist went to meet Bumble, a staff of the workhouse, to demand for more gruel, “Please sir, I want some more”, he was tagged a trouble maker.

Oliver’s treatment was a typical example of giving a dog a bad name so one can hang it. His penalty for this was that he was offered as an apprentice to an undertaker, named Sowerberry, where he met with more hardship.

A boy named Noah claypole ridiculed Oliver’s dead mother which led to a fight between the two of them and only Oliver was punished for that. He decided to run away to London to start life afresh, but unfortunately, the social vices of Victorian London had only more cruelty in stock for him. Oliver wanted to lead a decent life but when he met characters like Dawkins, the Artful Dodger, Charley Bates, Fagin and the rest of the bandit, he could not keep himself away from troubles.

His false arrest led to an injury which culminated to being taken in by Brownlow. Brownlow offered Oliver an ample opportunity to live a decent life, a life he had wanted so much, but Nancy and Bill Sikes came to ruined it all by taking him back to Fagin. Nancy later realized that they had ruined Oliver chance of a better life and she felt remorse about it. Till luck brought Oliver’s identity to the open and revealed Mr Monk’s (Oliver’s half brother) evil plan for him, his life kept revolving around controversies.

Charles Dickens deployed his characters to be cruel and mete out hardship to Oliver twist and to themselves as well to achieve the plot of the play. It was only the family of Maylies and Brownlow who were nice and caring to Oliver. From Bumble who sold Oliver’s locket to Mr Monk who wanted to cheat Oliver of his inheritance and the group of bandit that first took in Oliver in London, all were characters that displayed a great extent of sternness of the society to the needs of a wanting orphan.

Summarily, the theme revolves around the experiences of an orphan boy, left in the cruel hands of a society that cares little about children that have lost their parents. It also delves into the crude and brutal life styles of criminals. The book is a satire, a mild social critic of the insensitivity and unthoughtful of the society toward the orphans, especially children, who where enforced to work in workhouses. These workhouses were unkempt, unmonitored and overly in a chaotic state.

In the book, Charles Dickens draws the attention of the general public to the social vices of his time, most especially the law that states that orphans should work in the workhouse. The diction of the book also helps to a great extent in making the book a social satire, the diction is full of sarcasm and a peculiar humour painted with gloom. There are several scenes of melodrama, with passages marrying humour and horror together.

Today, the book is still relevant in our contemporary world, for it still addresses social issues like child labour and child involvement with crimes with are on the increase everyday. The book has adapted into several films and musical. Over, the book has made a literary and economic success. 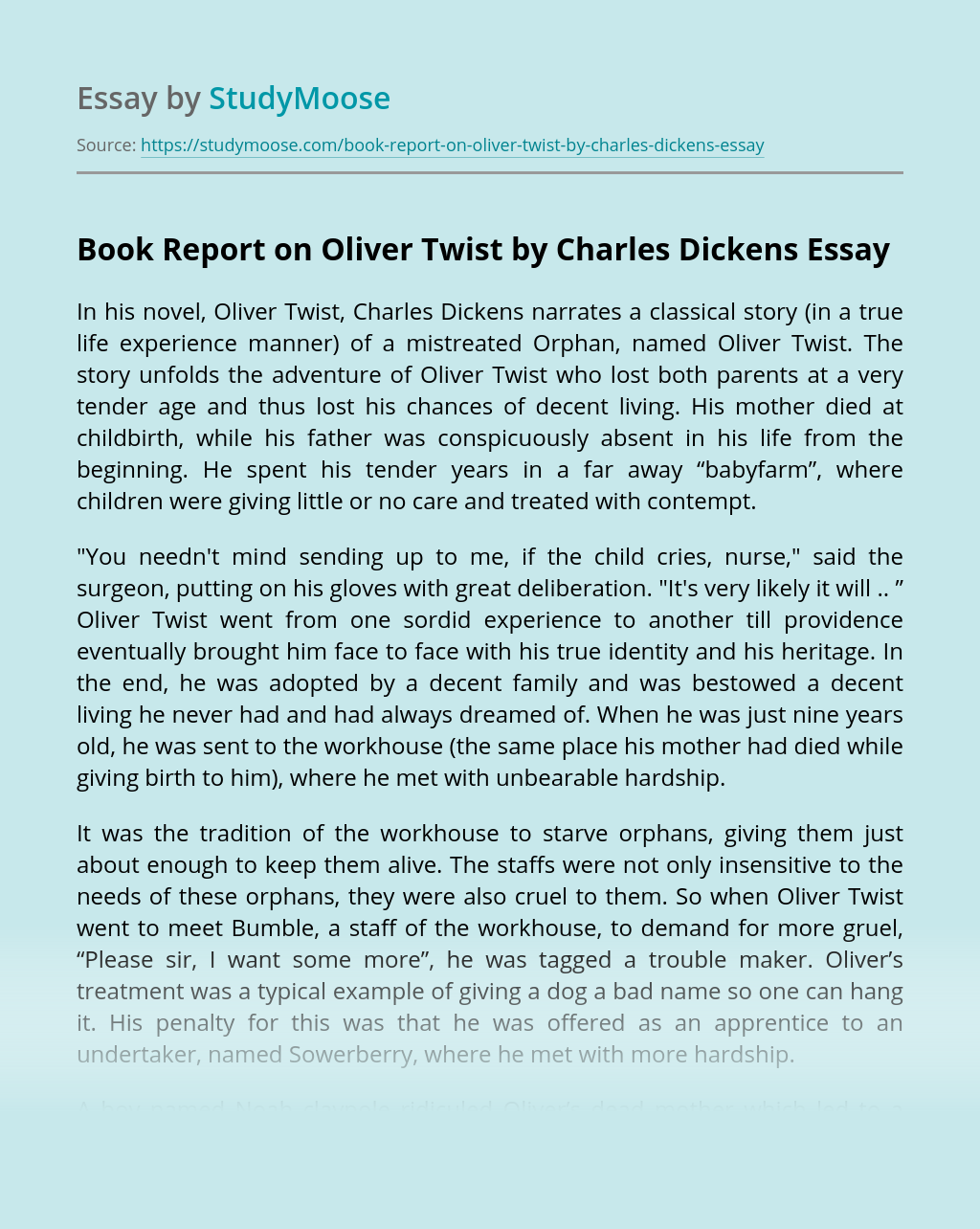