In the 19th century England was transforming into a heavy industrialized country. The industrial revolution caused many changes to the people living in rural areas. There was a great exodus from the villages to cities because of rapid industrialization. Many people lost their jobs and had to populate the streets of London. People who lived in the dirty streets of London had little choices in life and many of them joined the criminal world, while others had to cope with the poor conditions of the workhouses.

The differences of lifestyle between the lower and upper classes were sharp.

The poorer sections of society had little food and were plagued by famine and dirt. The upper class lived comfortable lives and enjoyed luxuries that the lower classes had not even laid eyes on. Their comfortable lives caused them to be ignorant of the burden that the poor people had to shoulder; this inevitably caused social unrest in Victorian London as the richer people looked down at the lower class as born outlaws.

The novel “Oliver Twist” is about an orphan who wanders through Victorian society facing both misery and fortune. Oliver was a child endowed with natural goodness and an instinct for survival.

He fights against committing evil actions to establish his identity in Victorian society. Charles Dickens, in his famous novel “Oliver Twist” criticizes London society, He criticizes the workhouses that the “paupers” had to live in. He shows that middle class people such as Mr. Bumble and Sowerberry are insensitive to the feelings of the poor, and he shows the readers the horrors of living a criminal life, which some people had resorted to.

Dickens uses great detail when describing events in his novel. This descriptive writing makes the novel seem very realistic and maintains the interest of the reader.

Through his language we get a view of London society. Dickens often uses exaggerations in his writing to emphasize his point and make it more effective. He also uses sarcasm to punch his messages to the readers. Reference to nature in the novel often paves the roadway to what would happen soon afterwards. Dickens also uses nature to symbolize the conditions of the lower class section of society. When Dickens was twelve, his family fortunes were on the decline. Charles was sent to work in a boot- bleaching factory and to hoard with other unwanted children in Mrs. Roylance’s house.

Charles Dickens found life miserable as he walked daily from the factory to the boarding house. Keeping Dickens’s history in mind, we could view him as a spokesman to the poor. He had gone through hardships when he was still at youth. This gives a lot of credibility to his views in Oliver Twist, has actually gone through an orphan-like life for a while. Charles Dickens reveals three sections of society in his novel. These are the lower class, the middle-class and the Victorian upper class. The lower class is divided into two sections, the poor section of society and the criminal world.

Characters like Fagin and Bill Sikes belong to the criminal world. They are hard core criminals who recruit poor people who are forced into crime due to their conditions. The middle class consists of characters like Mr. Bumble and Mrs. Sowerberry who are tactless to of the poor and are insensitive to their feelings. The Victorian upper class has a few exceptions on their attitudes towards the poor. These exceptions are represented by characters like Mr. Brownlow and Rose Maylie. They have high moral values and self-dignity. They welcome Oliver when he is in dire conditions and take care of him.

Most of the upper class people, however, do not trust lower class people, such as Mr. Grimwig. The novel “Oliver Twist” is set in London and its surrounding districts. The main character, Oliver Twist, spends his initial years of his lifetime in workhouses Dickens uses satire to criticize the conditions in the workhouse. We can’t help but to praise Dickens’ style of portraying the hunger of the orphans. He tells us that in the workhouses the orphans lived “without the inconvenience of too much food” which was quite enough “to overload” one’s stomach and “make it uncomfortable”.

The orphans in the workhouse had very little food to eat. They were extremely thin and pale. The intensity of hunger is shown in the novel through Dickens’s use of sarcasm. The bowls that the orphans were served their food in, “never wanted washing”. The orphans were hungry enough to devour “the very bricks of which it was composed” The orphans were also “sociably flogged” as a warning for the other orphans not to break any of the “tender laws”. Dickens sarcastically praises the English laws saying “What a noble illustration of the tender law’s…

They let the paupers go to sleep” Through Dickens’s satirical language the readers get the impression that London society was very harsh on these “paupers”. We also see the irony in the words “Tender laws” as such laws cannot be, by any standard called “tender”. We see that Dickens is a master of linguistic devices such as irony, satire and sarcasm. Dickens uses emotive language in describing the feelings of the orphans. Many a times do we see that orphans have wished for death, “he wished, as he crept into his narrow bed, that that were his coffin, and that he could be laid in a calm and lasting sleep…

” This use of pathos in his language shows us that orphans went through so much misery that the best way out for them was death. People belonging to the criminal world are stereotyped to be harsh and cold blooded. We see Bill Sikes’ vicious nature in the treatment of his dog “poker and the clasp-knife in his hands”. Bill Sikes and Fagin are always in conflict as well, showing us that criminals have cooperation problems, even though they belong to the same level of society. “I wish you had been the dog, Fagin, half a minute ago”.

These criminals also have no pity towards children. Sikes threatens Oliver with death. “Get up or I’ll strew your brains upon the grass”. Here we see Dickens’s use of violent language to stereotype a criminal. Further Dickens uses slang language in the speech of the underworld criminals to add to the interest and realism of the novel. Dickens uses words like “loathsome reptile” and “hideous old man” to describe Fagin. The outwardly description of Fagin seems to perfectly match his inner poisonous soul which Dickens has introduced us to.

Dickens suitably compares the corrupted souls of the criminals with “poison”, which adds to the overall effect of the readers’ opinions of the people belonging to the criminal world. Throughout the novel, we see that Fagin is referred more often as the “Jew”. It may imply that Dickens may have been a racist. However this gives us a hint that 19th century London society did not accept Jews as normal citizens, but as criminals belonging to the underworld. The middle class people are represented mainly by the workhouse authorities and the Sowerberrys who were extremely unsympathetic towards the orphans.

When Oliver asks for more gruel, the workhouse master looks at it as a great crime and reports it to the workhouse authorities, the description of the workhouse master as being a “fat” and “healthy” sharply contrasts the description of the hunger-struck workhouse orphans whose “bowls never wanted washing”. This contrast makes us sympathize with the orphans as they are unnecessarily parted from food, even though the means to provide it is available. The gentleman in white waistcoat says that Oliver “will be hung” just because he had asked for more food. Oliver is offered for an apprentice to anyone wanting 5 pounds.

The workhouse board bargain over the amount at which Oliver would be given. Dickens describes this bargain as a sale. When Dickens uses the word “sell” he shows us how the poor people were considered to be mere “goods”, which could be bought and sold with a few coins. The description of a well-nourished workhouse master suggests that he kept the money that was meant to feed and cloth the orphans all to himself. Dickens tells us that they used “the greater part of the weekly stipend to” their own use. Once again Dickens uses sarcasm by describing the workhouse masters as being full of “wisdom” and knowing what “was good for children”. 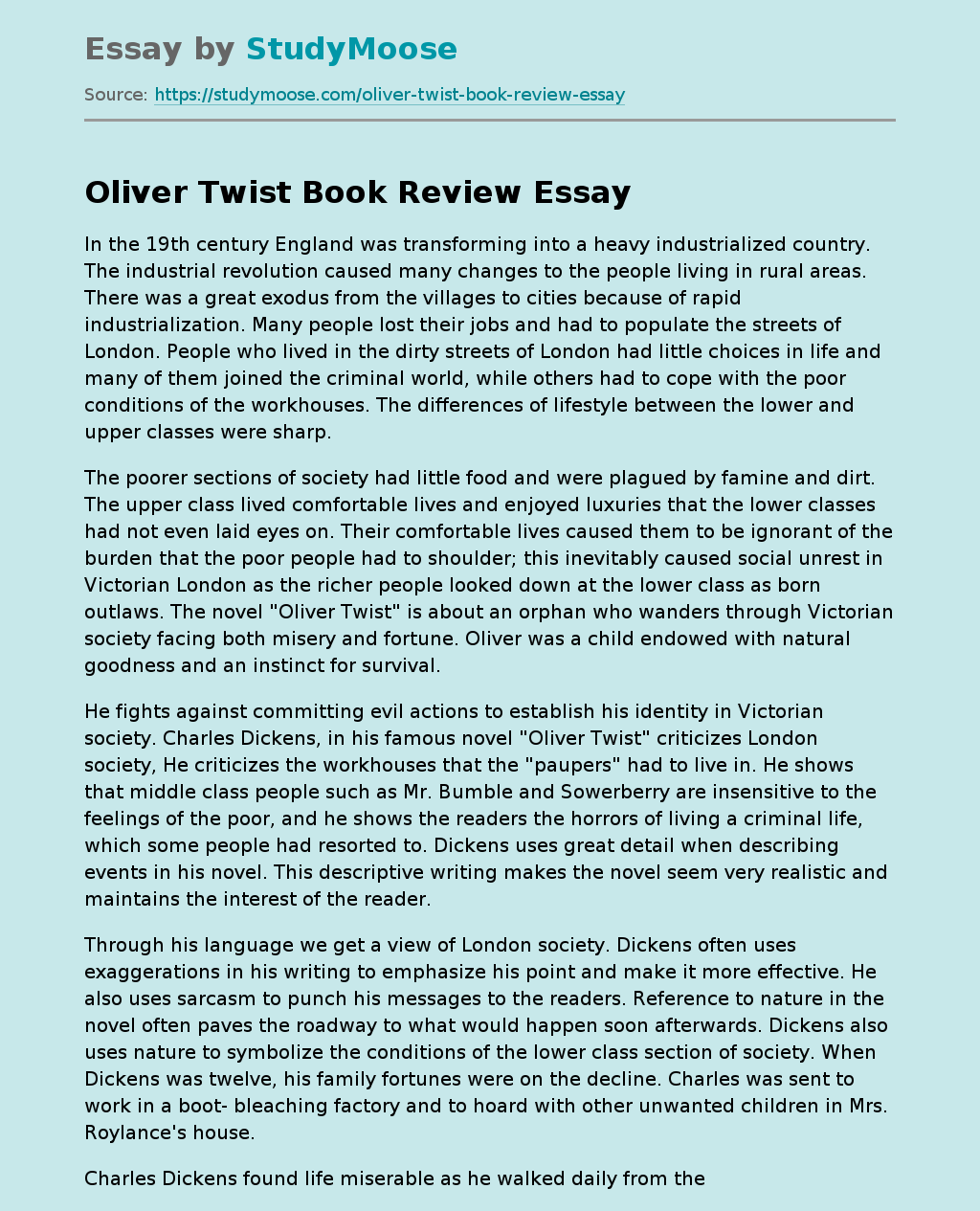