The presentation of Bill Sikes as a villain, in the original text of Oliver Twist and its film adaptation, is very different, with Sikes being portrayed as a more ruthless and remorseless character in the original text. These characteristics of Sikes being a villain are expressed through the way he is presented by Charles Dickens, through the use of language and his various interactions with other characters present in the scene. In the text version of the scene, Sikes is far more intimidating and he achieves this by a lack of speech and physical dominance.

Don't use plagiarized sources. Get your custom essay on
“ Bill Sikes in Oliver Twist Analysis ”
Get custom paper
NEW! smart matching with writer

On the other hand, the film adaptation focuses more on the “human” side of Sikes and how, through the use of digital devices, is presented to be a more regretful and a far less villainous character. In both the book “Oliver Twist” and it’s film adaptation, the interaction that Bill Sikes has with the other characters presents him as a villain, but more so in the extract from the book.

Firstly, in the extract of the book, in a conversation with Bill Sikes, Fagin tries to convince Sikes not be so violent when “beating” Nancy.

When talking to Fagin, Sikes’ response is harsh and asserts his dominance: “Hell’s fire! ” is one particular example where his aggressive use of words is expressed. In addition. Sikes uses short, command like phrases to prove he is the leader and that people will consequently obey him. “Let me out…. Let me out I say”. His use of language creates a semantic field of violence and aggression =.

However, in the film adaptation of Oliver Twist, Sikes does not speak at all, even though Fagin tells him to be “none too savage”.

This lack of speech from Sikes shows that, once again, he is the dominant figure, and is furthermore continued in his interactions with Nancy. In the film adaptation, Sikes does not mutter a single word, until after beating Nancy, and consequently killing her. The silence that exists from Sikes implies that he has no respect for Nancy, and that instead of using words, he results to violence. Nevertheless, although Sikes does not speak, he still has the overall upper hand and asserts this through the physical force that he exerts upon Nancy. 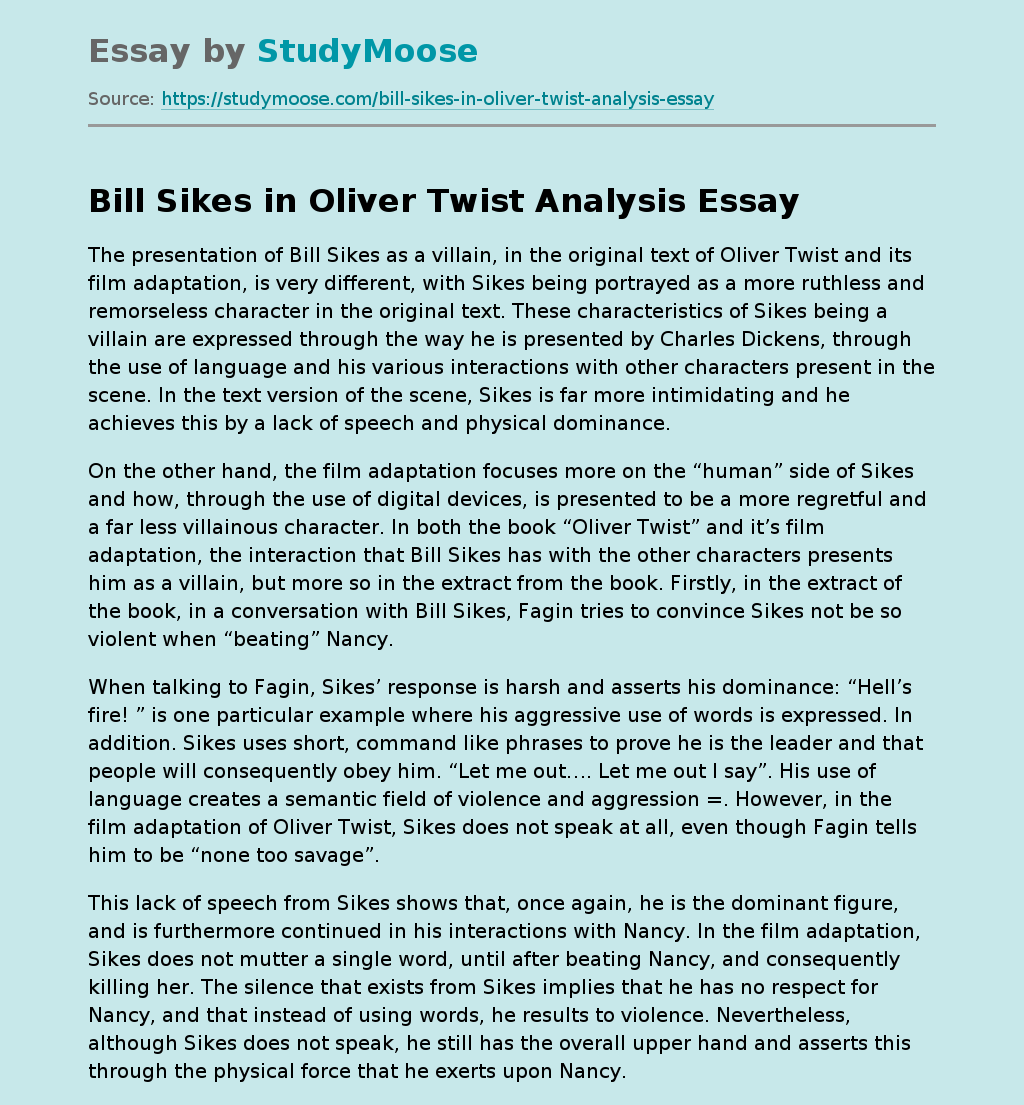