Critical Analysis of the Artful Dodger in Dickens' Oliver Twist

Write a Critical Analysis of the Character of the Artful Dodger in Dickens’ Oliver Twist. Would You Describe the Dodger Only as a Victim of Circumstances?

Jack Dawkins, also known as the Artful Dodger, is one of the most interesting and memorable characters in Dickens’ Oliver Twist. He is reckless and very good at pickpocketing. He is denied the opportunity of choosing his own way of life and is fated to become a criminal. Jack has been a victim of circumstances all his life.

Don't use plagiarized sources. Get your custom essay on
“ Critical Analysis of the Artful Dodger in Dickens’ Oliver Twist ”
Get custom paper
NEW! smart matching with writer

The first thing that strikes us when meeting the Dodger in Chapter 8 of Oliver Twist is the way he looks and acts. We see a boy, who appears and behaves like a full-grown man.

The Dodger is a child, who wears a “man’s coat” and “corduroy trousers” and has a big hat on his head, as Dickens describes him. He is dressed like a young gentleman, looking rather funny with his “half-way turned sleeves”, but his manners is the thing that lures our attention even more.

Not only is Jack Dawkins dressed like a man, but his attitude is like a full grown up as well. He walks and talks like a gentleman and we can distinguish him as a child only by his size. Apparently the way he has been treated by society or the way of life he had to lead influenced his manners.

The Artful Dodger is a pickpocket, he is very good at it and he enjoys it. We see in the novel, after he takes Oliver to his home, that he has been trained by Fagin for a long time and lives with him and some other thieves.

Jack lives with some other kids, who are also thieves, and their leader Fagin. The place they live in is dark, old and filthy; “the walls and the ceiling were perfectly black with age and dirt”. It is not the kind of place children are suppose to grow up in, but the Dodger did live a great deal of his life there. He is the most skilled in the group of little thieves and is their leader and his attitude towards them and Fagin is respectful and friendly.

Jack makes his living by stealing. He has been trained by Fagin from an early age and he is very good at it. Fagin had sheltered the Dodger when he was younger and vulnerable and trained him to be a thief, teaching him a bad way of living and so, depriving him the opportunity of his own choice of building a future. The circumstances of being an orphan led him to be apprenticed by the old thief, Fagin, thus becoming a thief himself and starting to enjoy it, which eventually leads to him get caught and put on trial.

In the end of the novel the Artful Dodger gets caught by the authorities and is under trial for theft. He is caught trying to pick a pocket and they found a snuff-box in him, which is his and which he carries with all the time. Eventually he is send to court where he acts in a derisively and impertinently manner considering himself as a victim, shouting “I am an Englishman; where are my rights?” Apparently he must make fun of the jury, thus making a kind of “glorious reputation” among the thieves community. Eventually the judge grows eager and expels him from the court as soon as the sentence signed. Jack didn’t dodge this situation and gets send to penal colony in Australia.

The Artful Dodger is treated as a criminal and a grown up all his life and he is very well adjusted to that. He is not the kid he is supposed to be and that makes him a victim of society – the victim of many circumstances that can fall on an orphan and deprive it of its childhood. 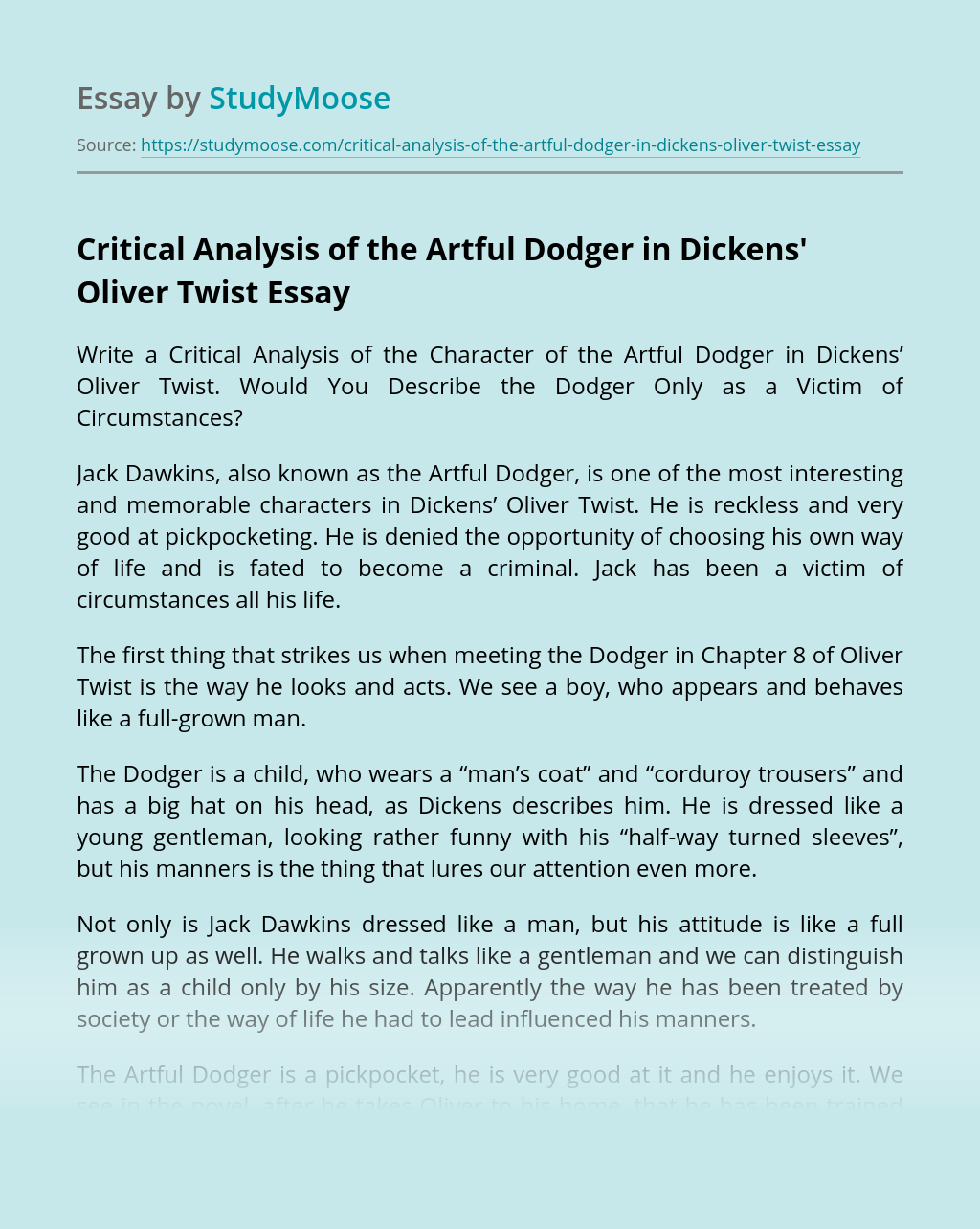