Death Be Not Proud: Simon Birch to The Scarlet Ibis Comparison

It is said that a person can accomplish anything if they put their mind to it. Humans have walked on the moon, swam the English Channel, and overcome disabilities to defy nature itself. In the film Simon Birch and the short story “The Scarlet Ibis”, two boys work to push past their disabilities that limit their lifestyles to the point of eventual death. Both Simon Birch and Doodle (“The Scarlet Ibis”) prove that strength does not necessarily have to come from the healthiest of humans, but that the ideas of tolerance for all should be a universal practice.

Turn in your highest-quality paper
Get a qualified writer to help you with
“ Death Be Not Proud: Simon Birch to The Scarlet Ibis Comparison ”
Get high-quality paper
NEW! AI matching with writer

Through their similarities and differences, these unlikely characters teach the reader about might and acceptance of those with disabilities. Doodle and Simon Birch are boys born with handicaps that could easily have limited their lifestyle. Doodle’s developmental delay and Simon’s small stature cause both characters to rely on those around them for support and assistance. Luckily, the kindness of Joe Wentworth towards Simon Birch and the consistent attentions of Doodle’s brother, allow both handicapped boys to live lives greater than most of the world could imagine.

Swimming, learning to walk, and boxing were a few things that Doodle learned from his persistent brother. Likewise, Simon enjoyed swimming with his friend Joe, and also playing baseball, which was some thing others did not think he could do. Not only did both characters push themselves with the help of their support systems, they also viewed the world around them as a beautiful place, in which they could learn to defy the limitations of their human bodies.

The doctors never believed that Simon would amount to anything and he became a handicapped hero by saving a bus full of kids.

Doctors said Doodle would never walk and through pain, frustration, and never giving up, he was able to learn to walk by his 6th birthday. The similarities between these characters are uncanny, but one thing that is continuously evident is that their disabilities did not handicap them. While these two boys have many character traits in common, their differences are most evident in the way they were treated by those around them. Shame and embarrassment in having a handicapped brother is what motivates Doodle’s brother to teach Doodle to walk.

In contrast, Simon Birch’s best friend, Joe, never treats Simon as handicapped and willingly brings him everywhere he goes. However, Simon’s family and many people around him do not see Simon as a miracle, but rather fear his “differences” as they do not understand him. He is ignored, rudely made fun of by others his age, and even told by a priest that God doesn’t have a plan for him. Doodle’s situation is completely different as his family is very supportive, caring, and nurturing, even if pride is the cause in the case of his brother.

Pride also leads to another contrast between these characters in their inevitable deaths. While Simon Birch dies a triumphant hero’s death, a disappointed brother leaves Doodle behind when he can no longer keep up. Despite Doodle’s warnings, his brother continues on without him only to return to find Doodle bleeding from the mouth and finally overcome by his handicapped limitations. The early deaths of these two boys are yet different as one dies due to love and other out of embarrassment. The important message of tolerance for all differences can be seen in the likenesses and dissimilarities of Doodle and Simon Birch.

Both demonstrate an inner strength, greatly due to their support systems, uninhibited by size or development that makes them mighty. Both also show a love for others that causes them to sacrifice their own lives. Each of their sacrifices paints a picture of how the world treated them differently and how one rose to a hero’s challenge and the other died in miserably being pushed beyond his limits. The greatest lessons are sometimes found in the most unlikely places. Anyone can be a hero, but maybe being a hero is more about looking beyond the surface and most importantly, leaving pride behind.

Death Be Not Proud: Simon Birch to The Scarlet Ibis Comparison. (2016, Sep 10). Retrieved from https://studymoose.com/death-be-not-proud-simon-birch-to-the-scarlet-ibis-comparison-essay 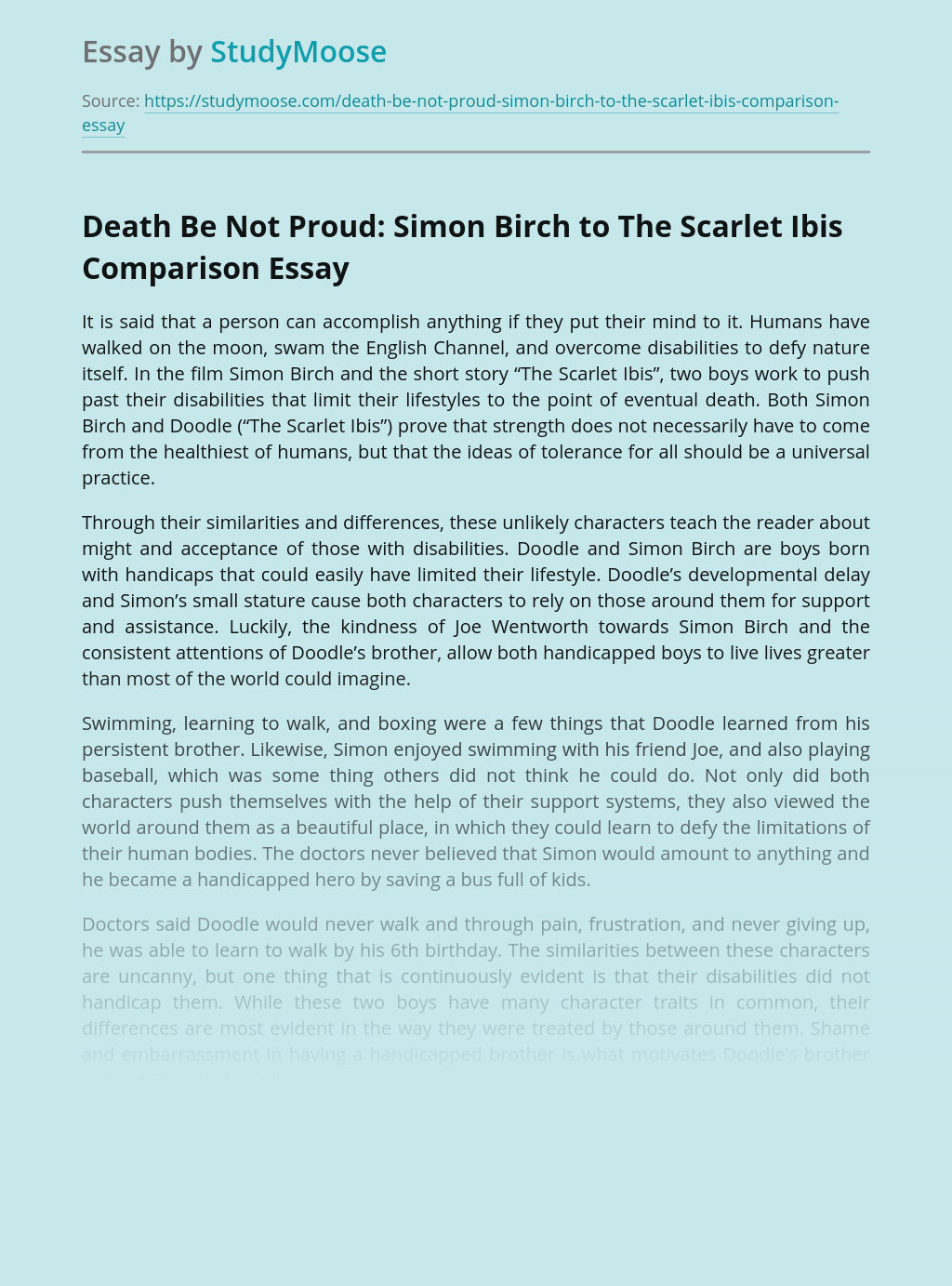 Turn in your highest-quality paper
Get a qualified writer to help you with
“ Death Be Not Proud: Simon Birch to The Scarlet Ibis Comparison ”
Get high-quality paper
Helping students since 2015
Stay Safe, Stay Original