The terms offer and acceptance are terms most commonly found in contact law. An offer makes up the first part of a contract, it is imperative that the offer is definite. The term offer is defined by Treitel as: ‘…an expression of willingness to contract on specified terms, made with the intention that it is to become binding as soon as it is accepted by the person to whom it is addressed…’ (Treitel 1999 P8) Offers must be definite, in able to be accepted.

Don't use plagiarized sources. Get your custom essay on
“ The terms offer and acceptance ”
Get custom paper
NEW! smart matching with writer

‘I…am prepared to offer you…my Lytham estate for £600,000…I also agree that a reasonable and sufficient time shall be granted to you for the examination and consideration of all the data and details necessary for the preparation of the schedule of completion.’ (Clifton v Palumbo [1944] 2 All ER 497). This case is an example of where there was no definite offer. It was held that this letter could not amount to an offer but was instead an invitation to treat to allow proceedings to occur and give a statement of the price.

This was due to the fact that the wording was not clear and suggested that a further contract would be made. There is a difference between offers and invitations to treat. An example of an invitation to treat is an auction sale. This is because ‘an auctioneer can withdraw a lot before the fall of the hammer.’ Payne v Cave (1789) 3 TR 148. It was decided that the auctioneer merely makes an invitation to treat. Bidders then make offers which at any point before the fall of the hammer, an auctioneer can chose to decline or accept.

Shop displays are also not offers. They are also invitations to treat, which invites customers to make an offer to the shopkeeper, whom he can then chose to accept. ‘…the displaying of the knife in the shop window was merely an invitation to treat and the shopkeeper had not thereby offered the knife for sale…’Fisher v Bell

A similar case found that a product in a store with a price attached is not sufficient to be considered an offer, but rather is an invitation to treat. “…in my opinion, the mere fact that a customer picks up a bottle of medicine from the shelves in this case does not amount to an acceptance of an offer to sell. It is an offer by the customer to buy…” Pharmaceutical Society of Great Britain v Boots Cash Chemist [1953] 1 QB 401 Advertisements can be offers or invitations to treat, depending on the advertisement. The legal precedent in English contract law is that advertisements are usually invitation to treat. One of the cases that established this was Partridge v Crittenden. Because there was a limited supply, it was judged that the advertisement was merely an invitation to treat, as if it had have been an offer, then it would have had to have been a unilateral, which would have been impossible with only a limited supply. Partridge v Crittenden [1968] 1 WLR 1204. However there are also cases where advertisements can be offers. In the case of Carlill v Carbolic smoke Ball Company (1892) it was decided that, because the advertisement did not have a limited supply, stated that it was an offer and displayed genuineness, that the advertisement was in fact an offer. This was a unilateral offer as it was made to the world at large. Carlill v Carbolic Smoke Ball Company [1892] EWCA CIV 1 Acceptance can only occur after an offer is made.

Treitel defines the term acceptance as: ‘…a final and unqualified assent to the terms of an offer…’ (Treitel 2007). The normal rule for the acceptance of an offer is communication. However there can be exceptions to this rule. For instance the conduct or actions of the parties may amount to acceptance of an offer. This can be found in Brogden v Metropolitan Railway Company. ‘… a contract had arisen by conduct … A mere mental assent to the agreement’s terms would not have been enough, but having acted on the terms made it so…’. Brogden v Metropolitan Railway Company (1876–77) L.R. 2 App. Cas. 666. Another case where contact arises from conduct, is where a man leaves his job, on the terms previously written, by quitting, even though he did not communicate acceptance to the terms, his acceptance came from the action of him quitting, Lattimore v Mott [2005] All ER (D) 415

The terms offer and acceptance. (2016, May 17). Retrieved from https://studymoose.com/the-terms-offer-and-acceptance-essay 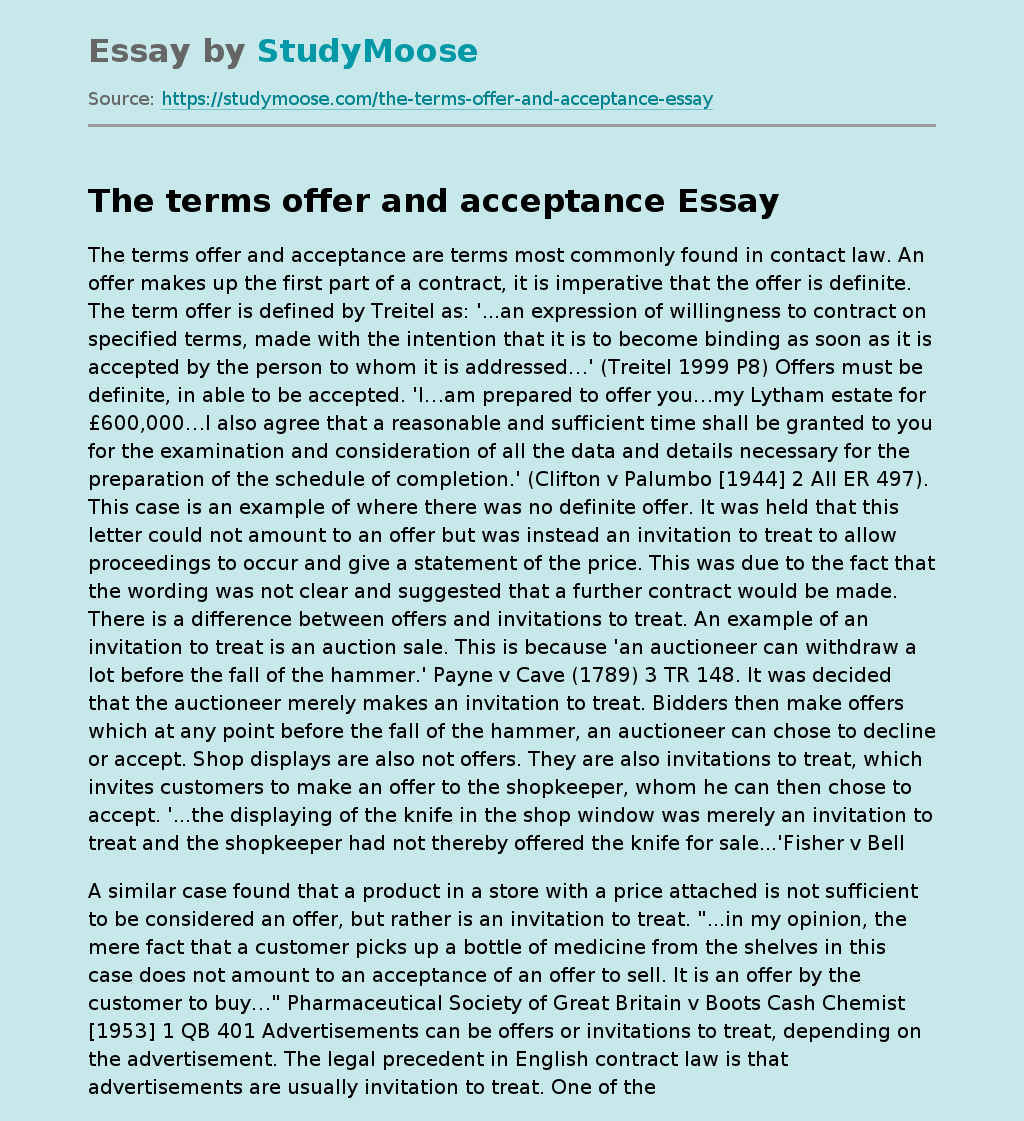