This House Will Offer Dictators Immunity if they Step Down

Don't use plagiarized sources. Get your custom essay on
“ This House Will Offer Dictators Immunity if they Step Down ”
Get custom paper
NEW! smart matching with writer

Furthermore, the obligation to bring former tyrants to justice is so great that it overrides any considerations of sovereignty, jurisdiction or amnesty. There are three main points that I would like to elaborate on. The first being, that incentivising dictators exacerbates the threat that dictators pose throughout the world.

History suggests that encouraging current dictators to leave office by making retirement more attractive will also encourage future dictators to seize power, by lowering the risk that they will face prosecution.

Given that 60 countries, representing nearly a third of the world’s population, are only partly free and therefore at risk of moving further into totalitarianism, this should be a grave concern. There is also the possibility that lenient treatment may allow dictators to regroup and mount a comeback, like Joaquin Balaguer in the Dominican Republic. Bueno de Mesquita, a professor at New York University, admits that allowing leaders to leave with their loot may give them a green light to plunder during their stay in office. He also confesses that he would not be happy with dictators enjoying an opulent retirement where they stay in exotic villas in Spain, compared to the alternative, which is having their head on a pike.

The second thing I want to talk about is the need for justice. The choice between amnesty and accountability is not easy. As a carrot, to push out a dictator, amnesty offers a chance to end years of brutality and corruption. Granted to a former dictator, it might allow a country to focus on more pressing needs – such as building a new state. But, following up on prosecution allows the opportunity of justice for victims. If done fairly, it builds a foundation of lawfulness for a future state. Forsaking justice for a temporary, patchy peace, is not the solution. Since 1990, 67 former heads of state of government have been prosecuted for serious human rights or financial crimes. It’s a meteoric rise, pointing to high profile cases such as,

Chile’s Augusto Pinochet, Iraq’s Saddam Hussein, Liberia’s Charles Taylor and many more. The trend towards prosecution is a healthy one. It marches in the direction of international law, which requires governments to investigate human rights violations and compensate victims. My third and last point is that granting immunity to dictators prolongs the road to peace. When you prosecute someone, who has taken nearly everything from you, has harmed you, attacked you, and murdered your family or friends, it brings closure. This allows individuals to move on. Whereas, if you grant the dictator immunity, you expect the victims to forget a pain that has never been dealt with. The closure would never have come, the people who have killed would never have been brought to justice, and there never would have been an admission that wrong has been done.

Finally, I think the focus needs to be on improving the present. Resources for internal criminal trials or for external trials really take away from what these poor societies need to focus on, which is, how are they going to make daily life better for people? It’s about creating a system where the past can never be repeated. I think it’s about accepting, about disabling the past and drawing a thick line and going on. In conclusion, I’d like to quote Archbishop Desmond Tutu: ‘As painful and inconvenient as justice may be, we have seen that the alternative – allowing accountability to fall by the wayside – is worse.’

This House Will Offer Dictators Immunity if they Step Down. (2016, Mar 20). Retrieved from https://studymoose.com/this-house-will-offer-dictators-immunity-if-they-step-down-essay 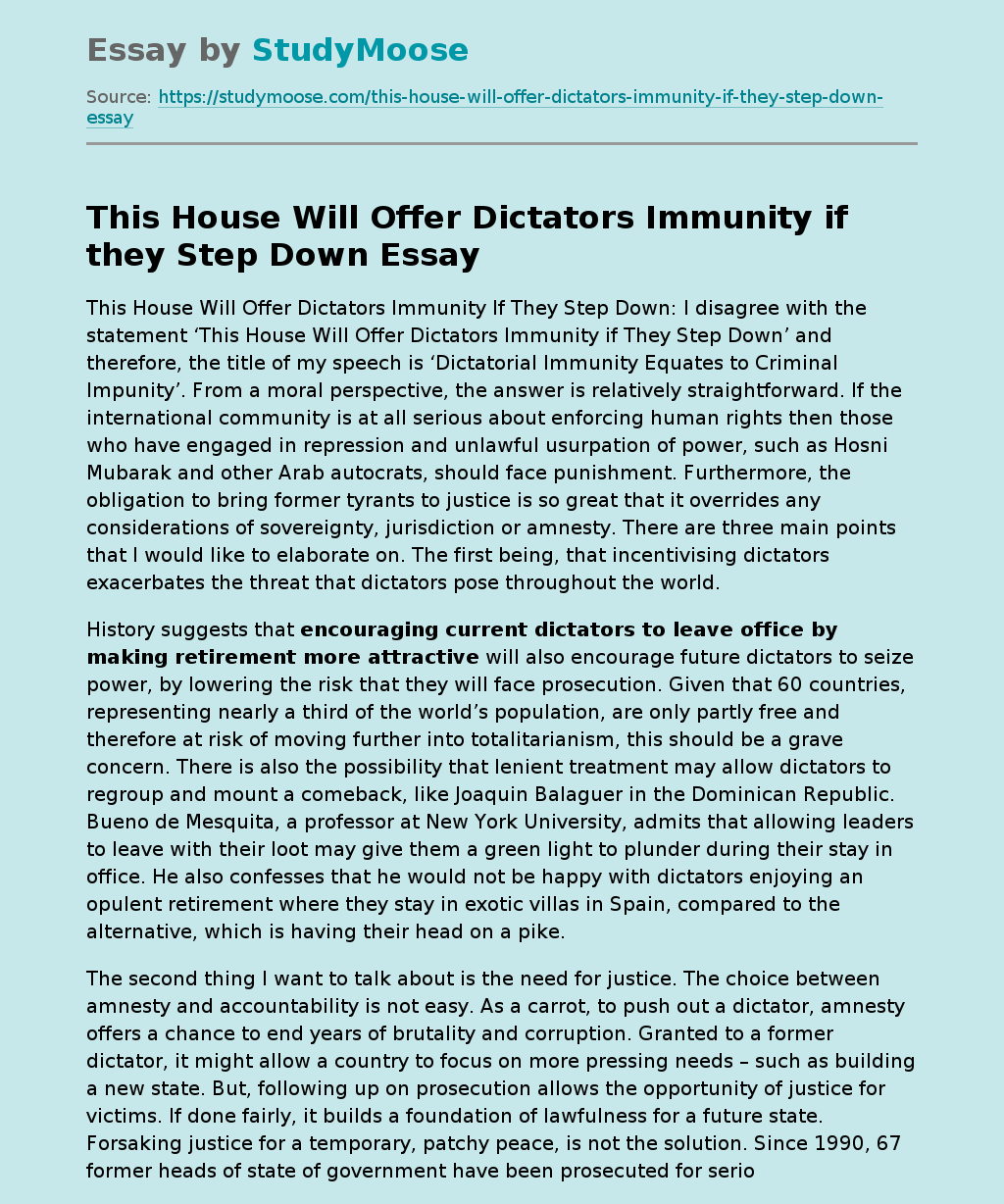