Each Generation Has Something Valuable to Offer

All throughout the world there are many different genres of music being played and listened to at all time of day. Music has a way of distracting people, making them forget about the world and just focus on what makes them happy. Each person has their own taste in music, the music that makes them happy. Therefore, the songs of the world have defiantly shaped our culture. Would our culture be the same without it? Most people would say “no” because music is a huge part of our culture and without it the idea of fun would be totally different.

Don't use plagiarized sources. Get your custom essay on
“ Each Generation Has Something Valuable to Offer ”
Get custom paper
NEW! smart matching with writer

Many people listen to the same music resulting in bringing a community together to raise a better culture. Music has always been a part of mankind because every beat contributes to the tune of the song, doesn’t matter if it came from a stick tapping on the dirt or the notes coming from an instrument. The Beatles, an iconic band in the music world, made it easier for other artists like Michael Jackson and Beyonce with their experimenting in the mid 1960s.

Throughout centuries music has changed drastically to the present day, evolving slowly from the beginning.

Whether we look at the past, present or future generation one thing is definite; each generation has something valuable to offer to the music industry. Music of the past started from the earliest of mankind, no man had an instrument to play to make music. They made their own music with anything they could find in nature.

People made something beautiful out of items that were originally made for an entirely different purpose. This creativity was the true beginning of music. From then music has evolved to become a much bigger craze.

People learned they could sing and instruments were made. The first instruments, the flute and some stringed instruments date back to somewhere between 7000 and 6600 BC in the Prehistoric eras. With music, dance came along in Ancient Egypt and became part of tradition and rituals. Musicians and singers started accompanying the theater plays for the entertainment of community members making music part of everyday life lifestyle. Choirs started to grow in the churches because music became more of an art and people wanted to share it with others.

And finally in the Baroque era, instruments were being intergraded into songs and dance resulting in the beginning of the music we know and listen to today. In the mid 1960s, The Beatles blew up the charts. They claimed many positions in the top 100 and at one point they had fourteen songs on the chart. They were the new wave of rock n’ roll/pop and everybody was crazy about this new boy band. Although they experimented with many things in sound and vocals, they brought new elements to the music industry. They were edgy and brave striving to be the first of many things.

The Beatles wrote most of their own songs, played their own instruments and even sang their own vocals with complex harmonies. This was a thing unheard of by any bands before their time, they were beyond normal, but this difference resulted in their huge popularity by the majority of the population. Being one of the first to make albums, people considered them more important and the other singles were put behind them. The Beatles were the first pop group to be taken seriously by classical music enthusiasts because of their global success.

A great accomplishment for the group and every member deserves the title of legends to live on after their deaths. Twenty first century music technology and styles have changed from previous years. The development of advanced technology for recording and distributing music made a wide variety of artists to gain global recognition across the world including Michael Jackson and Beyonce. As well there were dramatic innovations in musical forms and styles transitioning into country music, hip hop and punk rock to name a few.

Michael Jackson was a man of many talents; he is recognized as the most successful entertainer with his singer, dancer and fashion contributions. MJ has the number one bestselling album of all time, Thriller. Also, along with Thriller his other albums become ranked among the world’s bestselling albums making him one of the bestselling artists of all time. He has been awarded with 13 Grammy Awards, 26 American Music Awards, 18 World Music Awards and the estimated sale of 350 to 400 million units worldwide on all his albums combined.

Beyonce is the most awarded female of the 21st century; she has won 17 Grammy Awards throughout her career but overall she has won over 185 awards. The released of her debut solo album Dangerously in Love earned her five Grammy Awards and sold a total of 4. 9 million copies in the US. Billboard named her the Top Female Artist and Top Radio Songs Artist of the 2000s decade in 2009, and ranked her as the fourth Artist of the Decade. A great attribution to the music industry by both Michael Jackson and Beyonce, making their names recognized forever.

In the past, present or future generations it will always be true that music has evolved over many centuries and in every generation it continues to make people happy and have fun with. Mankind grew from simple music to something much greater and more beautiful. With newer technology artists could share their talent with everyone across the world giving others happiness while listening. The Beatles brought new things to the music industry and helped the success of other artists in the future like Michael Jackson and Beyonce.

Saying that music became a much bigger success as the generations went by, making each singer or band more popular by the year. Everyone has their own taste in music but many people even listen to the same songs. The music has shaped the culture and the culture is the bringing together of the people that listen to the same music. There is not one day that goes by that people aren’t listening to music, there has to be at the very least a few hundred people listening to different songs across the world.

Each Generation Has Something Valuable to Offer. (2016, Oct 03). Retrieved from https://studymoose.com/each-generation-has-something-valuable-to-offer-essay 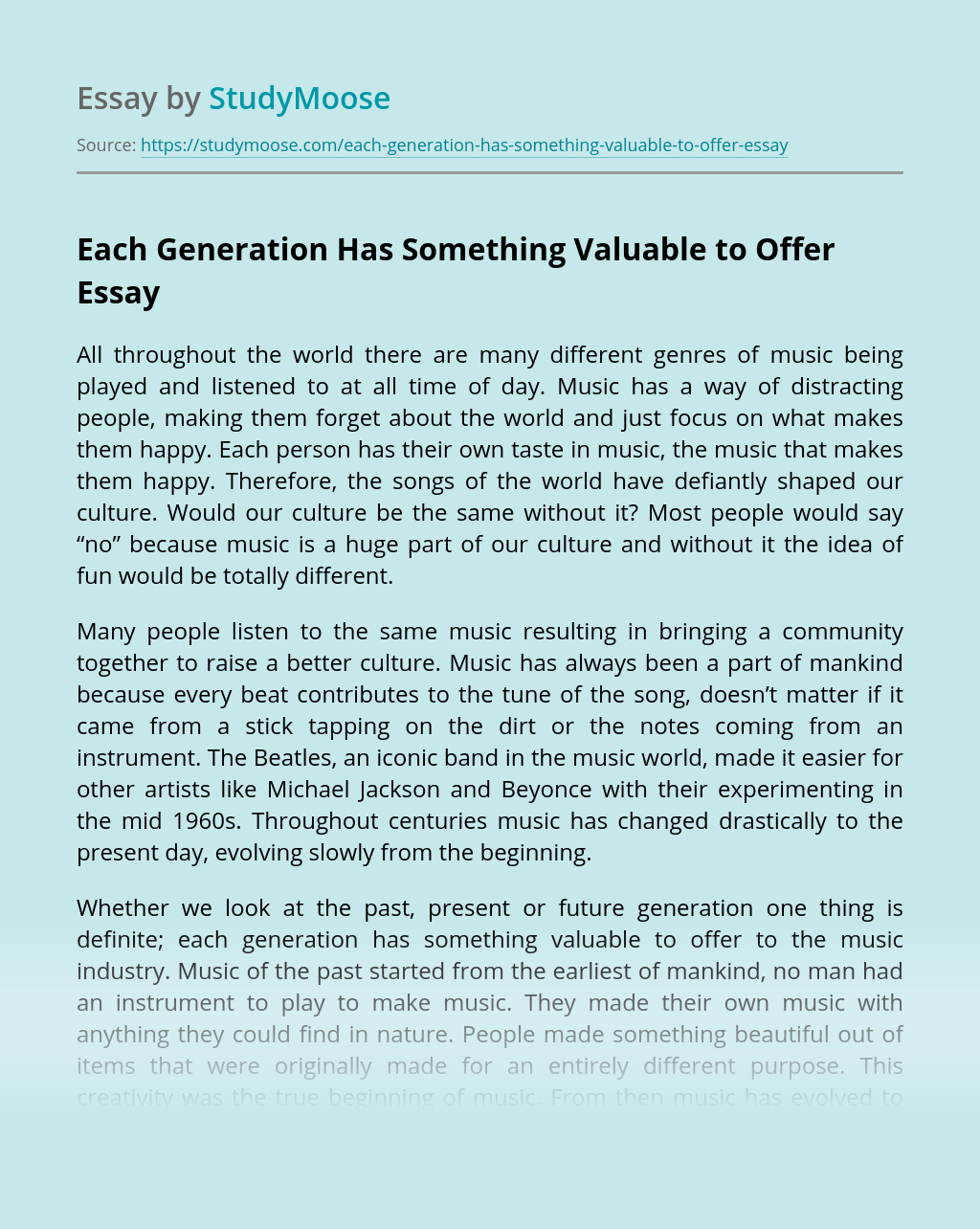