Oppression in A Tale of Two Cities

In the book A Tale of Two Cities, one of the many themes present is that of oppression. There are many examples of this throughout the book, some more obvious than the others.

We can see right away in the beginning that the French peasants are under a hideous oppression by the French aristocracy. All the people of the towns that are described are starved and in great pain, they are depressed and slinking about, gaunt skeletons of human beings. Their desperation is clearly evident in Chapter 5, when everyone nearby rushes to lick wine off of the city street when a barrel of it bursts after being dropped.

Don't use plagiarized sources. Get your custom essay on
“ Oppression in A Tale of Two Cities ”
Get custom paper
NEW! smart matching with writer

As this is occurring, the wealthy French citizens are reclining indoors and use a ridiculous number of servants just to prepare a cup of hot water. When a poor man’s son is run over and killed by the rich Marquis’s carriage, the Marquis makes no apology, and tosses a couple coins at the grieving father.

The aristocrats did not even think the peasants human; they treated them as animals, without a thought to their happiness or well being.

Another example of oppression is in Mrs. Cruncher’s relationship with her husband. Mr. Cruncher orders her about, and treats her like a piece of property, just there to do his will and stay out of his way. When Jerry Cruncher catches his wife praying for his thieving soul, he takes it to mean that she wants him to be caught and punished, so he will stop grave robbing.

His son sees him the next morning bashing his wife’s head into the headboard of their bed as a punishment for her prayers. Mrs. Cruncher lived in a constant oppressive atmosphere as she tried to conform to her husband’s wishes, but was never good enough for him, as he abused her pretty much every day.

A more prominent example of this theme is shown in relation to Dr. Manette. The memory of the eighteen years he spent locked up in the Bastille constantly hangs over his head as a burden. His experience in that atmosphere was so awful that the mere memory of it oppresses him. The Doctor tended to fall back into his half-crazed childlike state throughout the book because his experiences were more than his mind could deal with.

Finally, a major example of oppression taking place is with Sidney Carton. He is oppressed by an addiction to alcohol. His life had taken several bad turns, making him a depressed, almost broken man. When he met Lucy Manette, he felt as though his life now had a purpose again, because he loved her so much. However, Carton realized that with his character and lifestyle, he would never be able to make her happy. The alcohol he had turned to for comfort, which had been his only friend for years, was now working against him. Carton was so far gone that he was no longer able to give up drinking, no matter how much he wanted to. Alcohol now virtually controlled his life, dictating what he could or could not do. This was an awful example of self-induced oppression.

Oppression is such a powerful theme in A Tale of Two Cities, probably to demonstrate how people can put it upon themselves, and how they can break free from it if they believe in their cause enough.

Oppression in A Tale of Two Cities. (2016, Jun 22). Retrieved from https://studymoose.com/oppression-in-a-tale-of-two-cities-essay 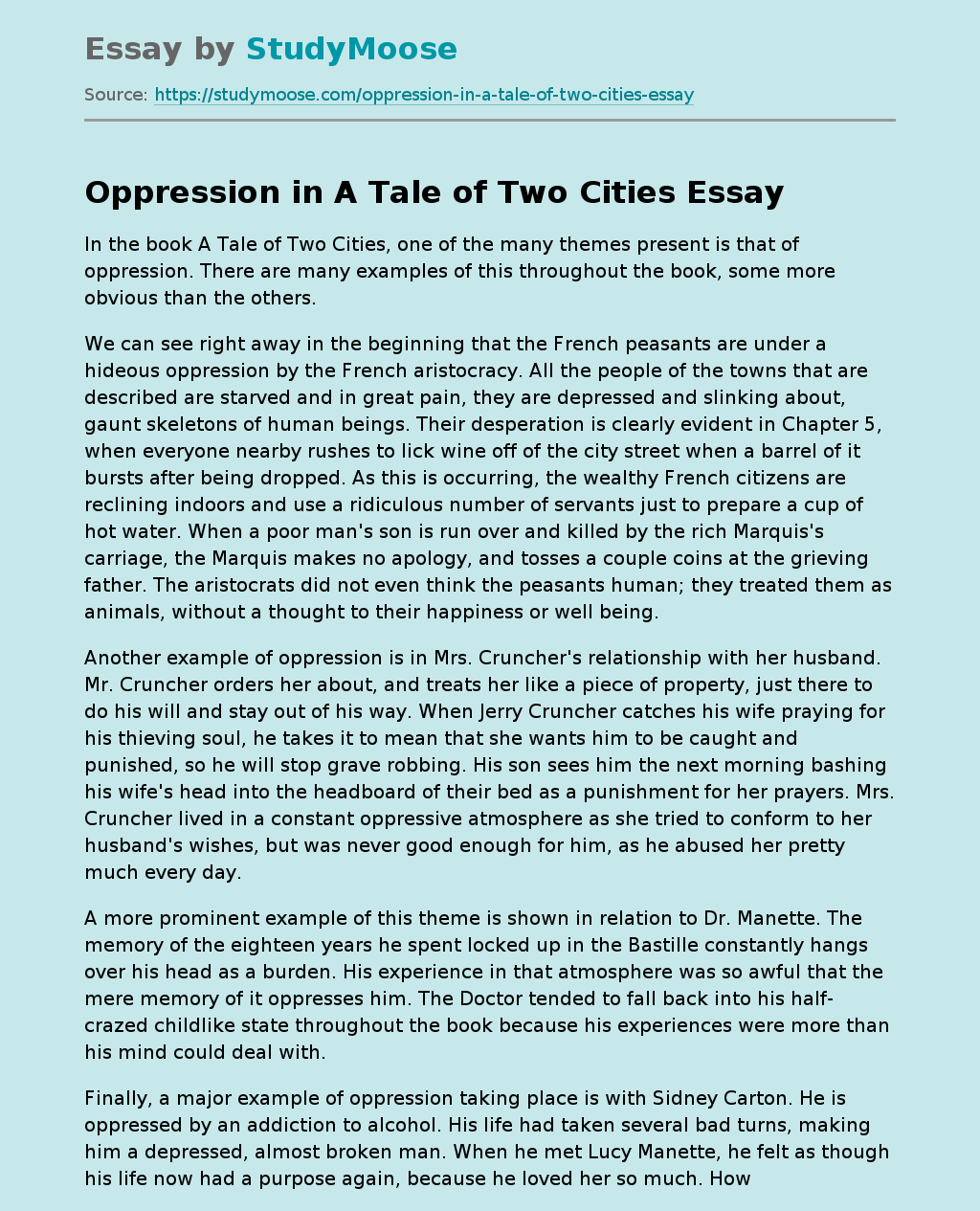