When learning about Ancient Rome you will learn that the city at this time was the strength of the west, as the Greek culture began to decline. It was the first urban area that European society controlled. They found that all roads led to Rome and that everything you could ever need was found there. It made people recognize that this sort of city life was the best and only way to live. It made it both the ideal and sought out way to live for many.

Don't use plagiarized sources. Get your custom essay on
“ Cities of Ancient Rome and Medieval Cities ”
Get custom paper
NEW! smart matching with writer

The city of Rome contained many great engineers and soon its cities became the center of commerce and trade. One specific item that was very popular for trading was spices. It was an easy good to transport, you didn’t have to pay a lot and it didn’t go bad. When the boom in trade and commerce began it changed the system of feudalism into more of a city state ordeal. The cities became not only a center of trade but also cause the emergence of industry.

The immergence of industry called for the division of labor. This broke up the main task into many little ones which caused the amount of production to increase tremendously. This allowed Rome to have a complex social structure, economic surplus, and ecological settings. The city was designed with roads that were very well built that helped other major cities at the time stand as provincial outposts to it. The city had a major center which included large monumental buildings, a market and fountains.

Rome completed in the early sixth century B.C.E a spillway system that allowed fresh water to be carried fresh water to them. These were called Aqueducts and the Romans were the first to develop this water delivery that usually often came from some distant place. Although all of this was happening it was not done to serve everyone. Those who benefited from it the most were the ruling military and the political elite. The poor that lived in Rome didn’t benefit nearly as much as the rich did when all the wealth was being brought into the city. The majority of the people lived in unhealthy living conditions, had little money and the air was very foul. I t was no way to live. As this continued Rome began to decline. Although there were many technological advancements the ways of living for many were unsuitable.

Medieval cities were established in 1066-1550 and were an expansion of London. In comparison to Ancient Rome the Medieval Cities were small in population and also more modest. They were about the size of a small town. This was established by William the Conqueror who lead the Norman Conquest. He began to build outside the walls so there would be less fear of hordes of people coming into the harbor. He built both the tower in London and the Fortunes of London in case it was ever attacked.

Medieval cities had roads that connected to the center of town. Like the center of Ancient Rome it contained a marketplace but not many other buildings. One of the most major importances of the medieval cities however, was its cathedral. Religion was very important here and was to be taken very seriously by the people. To be considered a true human being you had to be a member of the Roman Catholic Church. If you were not you were therefore cast out of society.

The living conditions here were far healthier than that of postindustrial tenements. The houses were built together in a row fashion and they were usually given space in the rear of the house for cultivation. This was perhaps because of the low density and small population of the cities. In comparison to Ancient Rome were the population was much larger. Another difference between Medieval Cities and Ancient Rome was perhaps the roads that the people traveled on. In Ancient Rome the roads were one of there greatest achievements and they were very well built. However, in medieval cities they were narrow and winding rather than paved and straight. 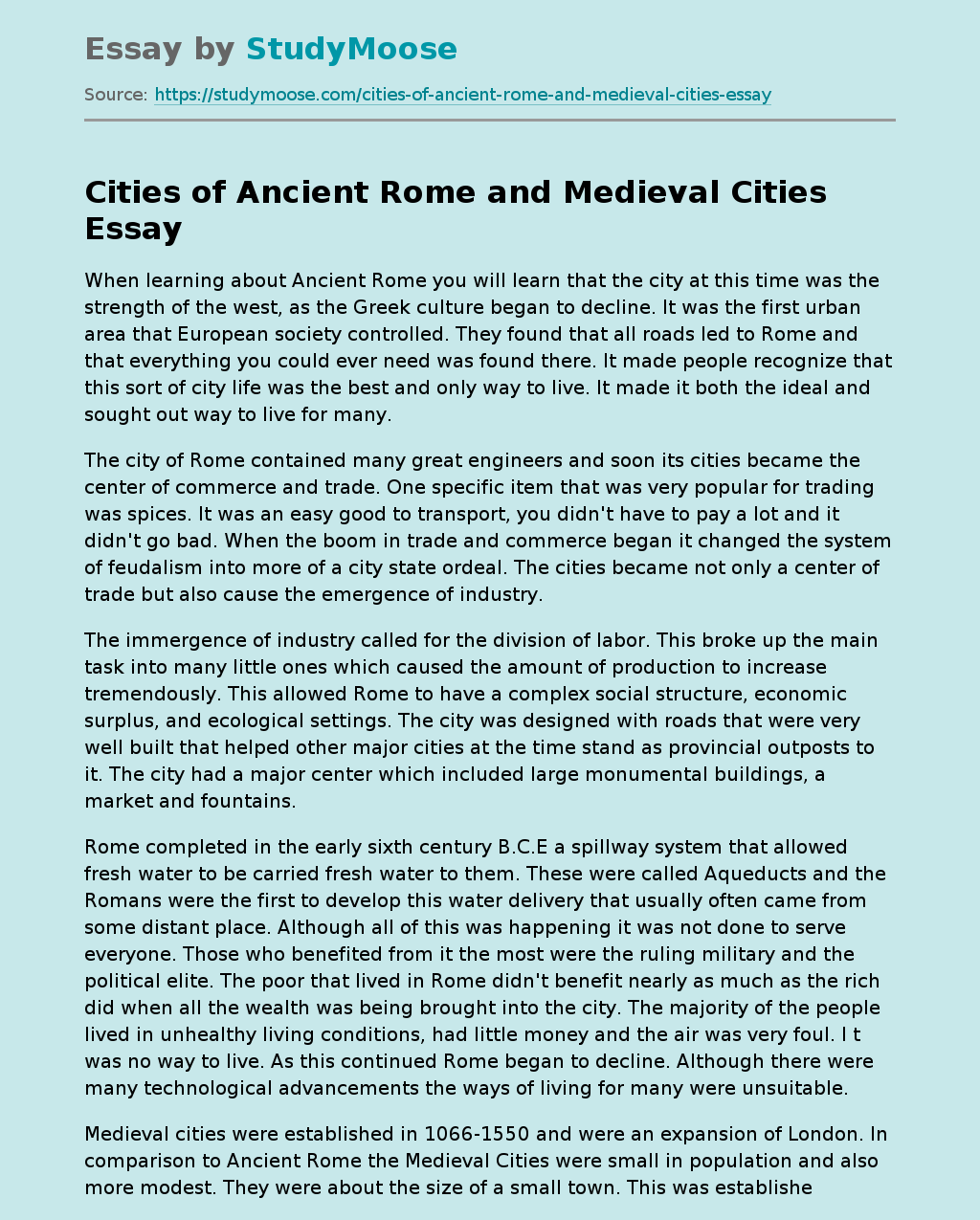