To a large extent the growth of towns in the medieval times greatly altered the mentality of its inhabitants. The social environment created by the mass immigration to towns marks a sharp increase in economic and political awareness, as well as a transition towards a more cultured society, increasingly characterised by intellect rather than religion.

Don't use plagiarized sources. Get your custom essay on
“ How the Growth of Medieval Towns Greatly Altered the Mentality of Its Inhabitants ”
Get custom paper
NEW! smart matching with writer

A typical layout for a large medieval town was based on the design of Jerusalem, the golden city-surrounded by walls, it was divided into four quarters by four main streets, and had at the centre a square with the law court and pillory.

This highlights two interesting aspects of the medieval town. Firstly, the walls, which surrounded most towns, are exemplary of the communal atmosphere that pervaded urban life.

There was a strong sense of kinship between citizens of the town, which no doubt empowered them in their struggle for certain privileges.

The importance of the family also seems to have become more acute during this period. The security of the town, kinship of its citizens, and distrust of outsiders is demonstrated in Ypres, where any stranger arriving in the town had to leave their sword at the gate. The second point to be made is the importance of the central location of the law-court and pillory, which highlights the growing freedom of townsmen to govern themselves.

One of the most important effects of urbanisation on mentality was the growth of political awareness and economic independence. The density of population in the towns along with their economic importance meant that the monarchy was willing to grant them certain economic and political privileges. Although the king retained ultimate control of all towns, the urban areas were given a large amount of freedom.

A notable example is that of taxation. Initially, the king appointed officials who collected taxes from each family, the result was that most officials over taxed and used the profit for personal use. Instead, the townsmen took control of taxation themselves, they chose the person who commanded the office and gathered the sum as a community; any excess money went directly to the town.

Furthermore, rather than being controlled by Royal Officials, each town had a representative body. The borough authorities had control of many aspects of town life: they controlled working hours, set the rate of pay, recorded budget keeping and took initiatives to find new sources of revenue.

Many towns had the right to representation in parliament and free tenure of property, and there also existed a civil constitution. Nonetheless, numerous uprisings were recorded between the twelfth and fifteenth centuries. These seem to have been caused by discontent over unfair taxation, embezzlement of community funds, and evasion of merchant laws.

This shows that even under the jurisdiction of townsmen, corruption prevailed. It also highlights the growing political consciousness among the townsmen. However some historians argue that the growth of political independence in urban areas has been widely exaggerated. Susan Reynolds argues that those living in town and country had the same legal rights.

Although this may be the case, the peasants did not make use of those legal rights as the town did; the fact that they could have been more politically active seems irrelevant. Perhaps a more interesting point has been made by Le Goff, who claimed that peasants simply moved from ‘servitude to the lords to servitude to the townsmen’. In many respects the town did mirror many elements of the feudal countryside. Rather than the landlord, the towns had the mayor or borough council.

These were always made up of the wealthy merchant elite. By gaining control over the gilds, the councils had power over all elements of the trade, and as was commented on earlier, controlled the rate of pay and number of working hours. Furthermore, the leading guildsman acted under the authorities in exchange for certain privileges.

Thus the council borough had quite tight control over the townsmen and shows that their political independence was not so strong as it immediately seems. Nonetheless, what we are looking at in this essay is the ‘mentality’ in urbanised areas, and though the wealthy elite had tight reigns over the majority of the townsmen, it seems clear that political consciousness was growing, though not paramount.

The importance of religion in urban society is a very interesting aspect of this discussion. To a large extent, the towns remained very devout, in each town the first buildings were normally secular and were built in great numbers: London had up to 110 parish churches. In his book Medieval Households, David Herlihy shows the influence that the church had over family life, both in rural and urban houses.

Most notable was their influence on the growth of ‘agnatic’ lineage, also known as the Patrilineage as it meant the ascendancy of males in the family. As agnatic lineage traced the male blood line through a family, the role of women in society became greatly undermined.; much mysogogy is seen in this period.

However, with agnatic lineage came the growing importance of ancestry and created a sense of pride and solidarity in each family. This, combined with the growing allegiance to the town made for a stronger community-based mentality. Thus, the church obviously continued to hold influence in urban areas. The clergy also took an active interest in the growth of fiscal activity.

For example, it ruled that widowed women had to marry outside the household they had been married into and that women could not marry anyone who they would otherwise be inheriting from; these rules encouraged the spread of wealth and stopped individual families from possessing all the money. The Church also took a particular interest in usury, a topic that dominated the code of canon law. Almost all scholars fought against usury, including St.

Thomas Aquinas and St. Bonaventure, who argued that a usurer was a thief of time and therefore robbing God; ‘Giving for usury is in itself and according to itself, a sin.’ (Old Testament) There were also numerous other professions which the church claimed to be sinful, including butchers, physicians, cooks, and dishwashers. However, with the growth of such vocations, the church amended their claims, instead condemning only butchers, acrobats, and usurers.

This demonstrates a certain amount of pragmatism within the church, showing that the church was conforming to the needs of the town, rather than the people basing their lifestyles on the preaching of the church. Indeed this is shown in the growth of towns in the first place, which were originally considered sinful by the church, the makings of Cain.

The existence of such professionals as usurers and courtesans shows that although citizens may have publicly criticised those whom the church called sinful, privately some were associating with them. It seems that to some degree religion was rather superficial element, at least of the wealthier class.

The best example I’ve seen of this is in their treatment of lepers, who were thought to be in purgatory, being punished for previous sins, and therefore holy. Lepers were therefore placed on the outskirts of town, far enough to be safe from infection, but close enough that when they visited the ill, the rest of society would see their piousness.

Therefore, although religion was still influential, there are hints that its predominance was dwindling with the rise of urbanisation. The apparent decrease of the supremacy of the church coincided with the growth of culture in Medieval Europe. The most important aspect of this was the importance which was increasingly given to education and intellect. Urban life necessitated the development of people who could read, write and calculate.

Thus the number of children in education grew rapidly; in Florence in 1338, there were 8-10,000 children learning to read and write, and 1,000 studying mathematics. The abilities of educated laymen, such as doctors, jurists, and notaries, also suddenly became of high importance.

Men who were not ‘narrowly religious’ began to have some dominance in society, and the ‘environment of the man of ‘lay culture” was created. Great advances were made in the study of law as well; Irnerio, for example, was responsible for separating law from ethics and logic. During the 13th century we see the emergence of statutes, and a ‘legal and rhetorical culture with precise and mature features’.

The growth in economic relations also caused the growth of notaries, who were capable of registering agreements and often served as a mediator between law and customs and the changing society. There is also growth in other intellectual fields, such as zoology, medicine, and astrology-many congregated at Magna Curia, where Frederick Il welcomed intellectuals for research and debate.

Hence, there was a great turn towards the intellect and science and a strong increase in non-secular education. The turn from nature to culture was seen on many other levels of urban society as well. As Le Goff points out, the need to arrive at work on time created the demand for clocks, which emerge in various towns in the first half of the 14th century.

This was an important progression, which marked a time when man increasingly controlled nature; as Charles V commented, one could now tell the time ‘whether the son shone or not’. Similarly, historians have noted a growth in the consciousness of ‘statistics’–people started caring about numbers, which is exemplified by Humbert of Romans encouragement of the clergy to spread to the towns where their message could be spread to more people.

Town dwellers also seemed increasingly concerned with space, carefully planning the layout and aesthetics of their town, and spending most money on buildings. This is demonstrated again in the urban burial sights, which were often organised in uniform rows and were apparently prepared with the intention of space efficiency.

In conclusion, I think that the social environment in towns greatly affected the mentality of its cities. Despite the arguments of many historians, I think that the political impetus of the townsmen was enhanced, if not by the town itself, then by the growing importance of money in the urban environment. Perhaps religion remained a very important part of society, but the effects of the growth in culture are more convincing.

Perhaps some of the consequences of urbanisation were rather subtle, or at least effected the richer strata of society rather than the majority of normal citizens. Still, all must start somewhere, and this change in mentality would eventually filter down to every level. As Max Weber said, medieval urbanity was ‘inseparably linked as one of the most crucial factors to the rise of modern capitalism.

How the Growth of Medieval Towns Greatly Altered the Mentality of Its Inhabitants. (2021, Oct 06). Retrieved from https://studymoose.com/how-the-growth-of-medieval-towns-greatly-altered-the-mentality-of-its-inhabitants-essay 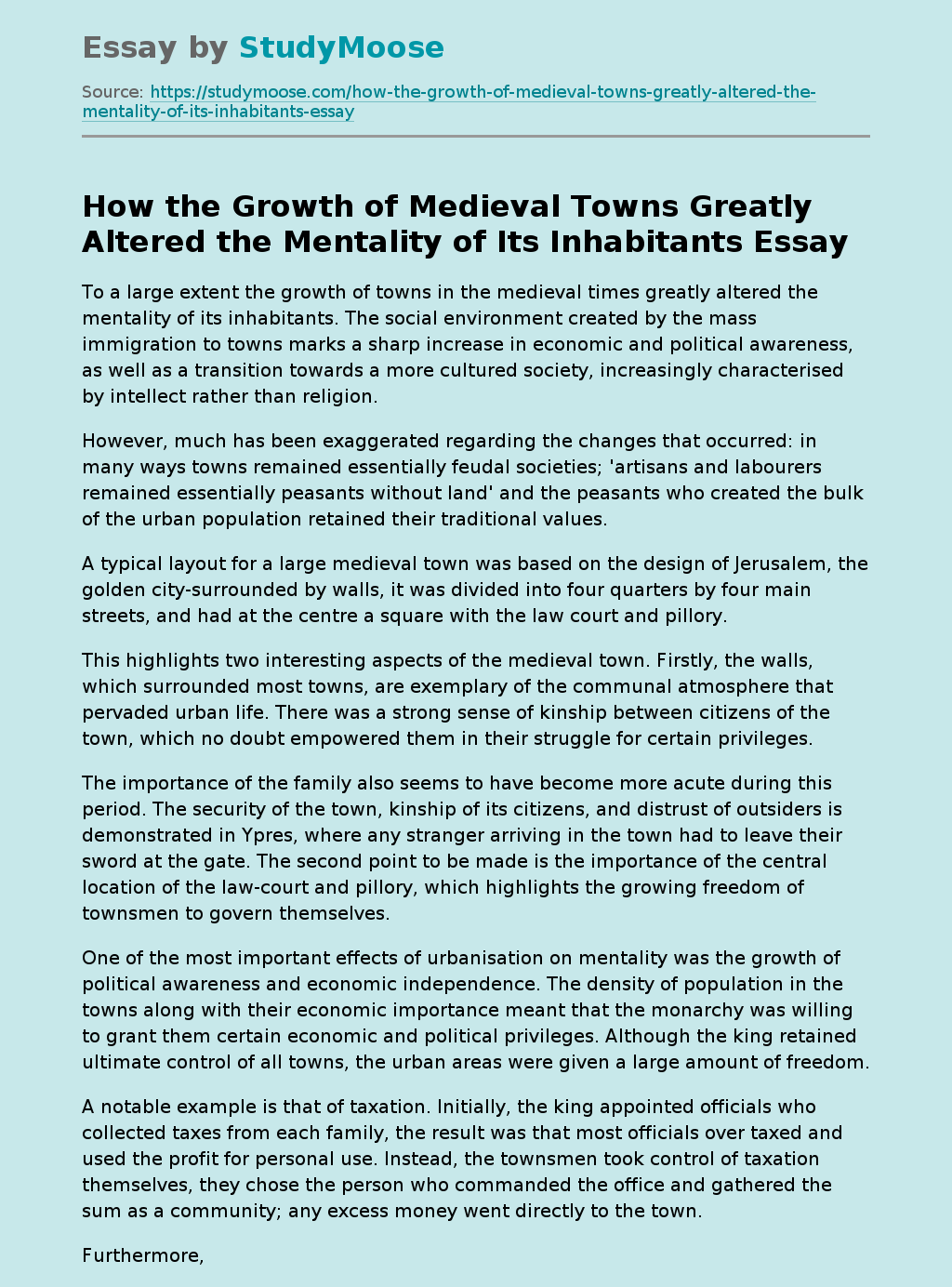