I feel like there has been a change since Susan Bordo’s “Beauty (re)discovers the male body” when it comes to acceptance for men to care about their appearance. Bordo is claiming that for a long time it has been okay for men to view revealing pictures of women, but that it’s new for women to view revealing pictures of men. She talks about men showing themselves naked in pictures as a taboo. Men aren’t simply comfortable watching other men without clothes.

Don't use plagiarized sources. Get your custom essay on
“ Essay on Susan Bordo’s Beauty(Re)Discovers the Male Body ”
Get custom paper
NEW! smart matching with writer

I believe it is more accepted now, than it was when Bordo wrote the essay. I believe this is because of the homosexual-community, and that it’s more accepted in today’s society, but it may also be because men has just gotten used to it. Of course there are some pictures that still make a man uncomfortable. It is still not really normal for a heterosexual man to look at a picture of another man portrayed in a sexual way, but I think this will change over time.

I think self-confidence is the main key to progress. If you’re confident in yourself, there’s no problem experimenting with what you wear. And I think that men today are more self-confident than they were before. When Bordo wrote her essay, a well-dressed man would be considered homosexual. Today, I think a well-dressed man is considered even more masculine, just because he cares about his appearance and has the courage to be different. In “Honey, what do I want to wear” Bordo states that men doesn’t know how to dress themselves, and that they need a “girls touch” or opinion to decide.

“I’m damn well gonna wear what I want. … Honey, what do I want” (Bordo 209). Isn’t the normal man capable of dressing himself? I feel like this has changed since Bordo’s “Beauty (re)discovers the male body”. I feel that men have become more independent in how we dress, and it is more accepted now for men to experiment with what they wear. For example a man wearing a pink shirt, this wouldn’t be accepted the same way 10 years ago. Again I think that the acceptance of the homosexual-community is a strong factor for the development of what a man can wear. You’re not homosexual just because you dress nice.

This development has helped men become more equal to women in the fashion-way. It’s still not 100% equal, but the society is on the right path. David Altschiller claims: “But if a man is self-confident – if he knows he is attractive and is beautifully dressed – then he’s not a man anymore” So basically what he’s saying is a man cannot be beautifully dressed and know he looks good, because then he’s not a man anymore. Real men wear whatever they find on the floor, and cannot put an effort into what they wear if they want to remain masculine. With the old fashion thinking like this, you could send the women straight back to the kitchen, because only men work, and women belong at home with the house and the kids. People need to wake up and get out of the past. Luckily more and more men have started to care about what they wear, and this gets us in the right direction; there should be no difference between men and women! Before I get into the ads I want to define “rocks and leaners”. The rocks present themselves as powerful, armored and emotionally impenetrable. “I am a rock; their bodies seem to proclaim” (Bordo 203). The dominance is important to describe the rock. “Who can stare the other man down? Who will avert his eyes first? Whose gaze will be triumphant?” (Bordo 203). It’s like the rock is trying to challenge you through his gaze, and show the viewer who the boss is. It’s all about the power of the gaze, which indicates the power to stand one’s ground. The leaner, which got their name because they’re almost always reclining, leaning against, or propped up against something in the advertisement. They play more with their gaze in a seductive way, inviting the viewer to escape into their world. A leaner is more feminine, on a contrary to the rocks that are more masculine.

The leaners are younger than the rocks, often between 20 and 30 years old, while the rocks usually are between 30 and 40 years old and their bodies are made for movement, in contrary to the buff rocks. “A recent Calvin Klein “Escape” ad depicts a young, sensuous-looking man leaning against a wall, arm raised, dark underarm hair exposed. His eyes seek out the imagined viewer, soberly but flirtatiously. “Take me,” the copy reads” (Bordo 205). Here we see that it’s still all about the gaze. Now it’s not about challenging through the gaze, but the sensual flirtation in the gaze. I consider George Clooney to be a real man, loved by women everywhere, but still he cares about what he wears. So does that make him feminine? I think it only improves his masculine image. He’s a man, and he knows it. He
looks good, and he knows it. It doesn’t matter if he wears “masculine-clothes” or in this case, a white suit. In this picture he is a mix of a leaner and a rock. He’s a rock because he stares into the camera, he’s older and he has a challenging look. But he’s also a leaner because he has a seductive flirt to his smile.

I believe that celebrities make a huge impact on what’s OK to wear and what’s not. It automatically gets more accepted when a celebrity does something, like a new haircut or a new clothes-style, and that really makes a difference in the society. One of the biggest inspirations for younger men is football-stars. I picked David Beckham, because I think he’s the perfect combination of a masculine man and a man who cares about his appearance. He has always been different, and people all over the world have copied his hairstyles and clothes. But there is no doubt that he’s a real man. In this advertisement for his own perfume I think he’s a rock. He stares intense into the camera, it’s close up, and he’s 38, so the age fits perfectly. You can feel the “challenge” in his gaze, which makes him dominant. He’s showing the viewer that he got all the power.

In this advertisement for Moods of Norway we see a how a man can dress differently, but still be a man. Wearing pink, which has always been considered a girl-color, has never been compared to masculinity. Moods of Norway are known the play with colors and clothe styles. The picture shows a leaner, a younger man looking away from the camera, wearing a bright pink suit with a bright sky-blue background which makes the pink look even pinker. If this advertisement had been shown when Bordo wrote her essay, the first thing to pop up would be; homosexual. Today it’s just another advertisement, and very few would think about homosexuals when seeing this picture. Bordo claimed “In the female the ability to match colors comes at an early age. In the male it comes when he marries a female” (209). So when Bordo wrote her essay, the men needed help from their wives to look good, in contrary to today’s society, where all the top fashion-designers actually are men. Times have changed, and the acceptance of men dressing themselves nice is so much bigger than when Bordo wrote her essay. An advertisement is also a great factor to tell men that it’s okay to dress nice. Bordo writes
that companies like Calvin Klein, Versace and Gucci have been doing this since the nineties: “They suggest its fine for a man to care about how he looks and to cultivate an openly erotic style” (Bordo 208). It takes confidence to be different, but wouldn’t the world be very boring if every man wore the same clothes? I think it’s a good thing that things are changing, and I personally like to wear nice clothes and to put in an extra effort with my appearance. Luckily I’ve never cared about what other people think, because if I had cared about that, I would never have dared to experiment with what I wear as I do now. But I’m confident on my own sexuality, and what you wear doesn’t define if you’re heterosexual or homosexual! I’d rather feel good about my appearance than caring about others opinions. 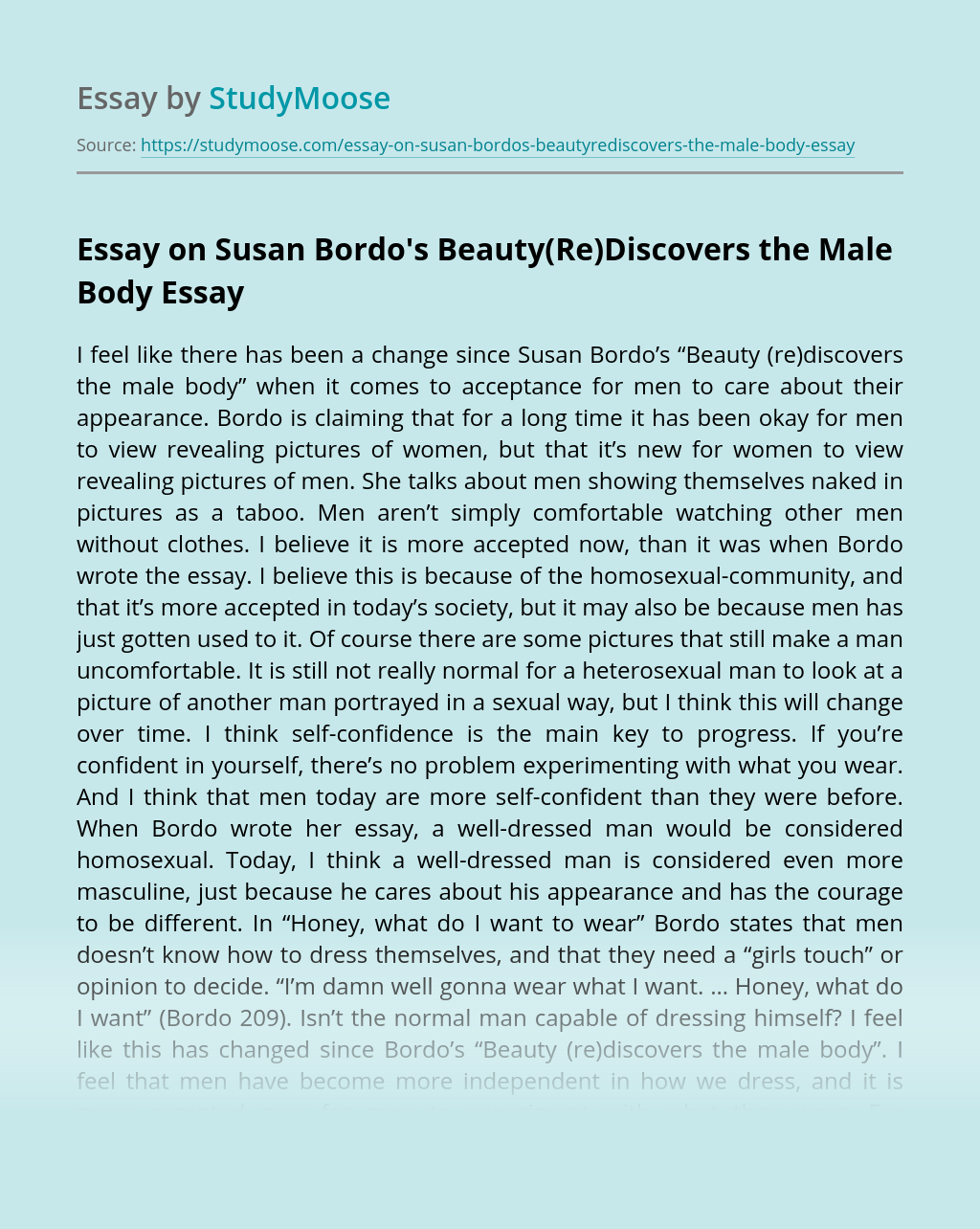